Can anybody help identify this Egyptian scene/hieroglyph?

Sorry if is not the appropriate category for this question. I recently inherited 2 decorative wood plates, one of which is pictured below. I’ll add the picture of the 2nd one tomorrow. Does anybody know what is going on in this scene or what the hieroglyphs say? Thanks in advance! 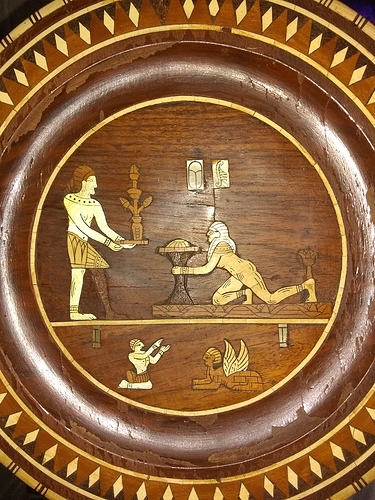 The second symbol reminds me of the one they used for the word “reed” ,while the first seems like the symbols they used to address kings and/or royals. I could be wrong though, but it seems like an offering /sacrifice scene to a king.

First of all…this looks much more greek style…like someone tried to make something egyptian inspired but in greek style…so really it’s not saying anything.

The scarab beetle above the head of the kneeling figure…scarab beetle has a lot of significance to rebirth, reincarnation, regeneration. Also has solar symbolism.

The beetle is modeled after a beetle in egypt known as the dung beetle. Because of how the beelte push the dung along and seems to come out of nowhere it became associated with the sun. They saw it as though the beetle pushed the sun across the sky each day…this is metaphor of course.

Ma’at was the foundation of ancient Egyptian religious beliefs. Ma’at represents Divine Order in short. She was the daughter or Ra. It was said that when Ra created the universe…that it was created on the foundation of Ma’at. Therefore, Ma’at represents ALL Divine Order. From the laws of physics and biology, to interpersonal balance, truth, justice etc…

The lotus is representative of life and rebirth as well.

If it is saying anything…it looks like the kneeling figure is making an offering to what looks like they wanted to be a God. He is receiving a blessing. The Scarab and Feather basically says Rebirth and Divine Order.

I’m not sure about the bottom figures.

Like I said…this really just looks like someone wanted to make something decorative and mixed a few different elements, or put their own spin on an Egypitan picture they saw…possibly without knowing anything about it. The style and the images are all very greek to me…as opposed to egyptian.

It is very nice though! 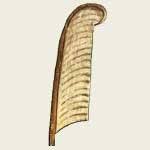 Thanks for your help (and you too, Mystic-Void).

Information on the Scarab Beetle

Scarabs are a mesmerizingly diverse family of beetle found in every part of the world except in the oceans and on Antarctica. There are about 30,000 scarab species comprising about 10 percent of all known beetles.

The Egyptian sacred scarab is a dung beetle.

Scarabs are a common type of amulet, seal or ring bezel found in Egypt, Nubia and Syria from the 6th Dynasty until the Ptolemaih Period (2345-30 BC). The earliest were purely amulet and uninscribed: it was only during the Middle Kingdom (2055-1650 BC) that they were used as seals. The scarab seal is so called because it was made in the shape of the sacred scarab beetle (scarabaeus sacer), which was personified by Khepri, a sun god associated with resurrection. The flat underside of the scarab, carved in stone or moulded in faience or glass, was usually decorated with designs or inscriptions, sometimes incorporating a royal name. Scarabs, however, have proven to be an unreliable means of dating archaeological contexts since the royal name is often that of a long dead ruler; Menkheperra, the prename of Thutmose III (1479-1425 BC). 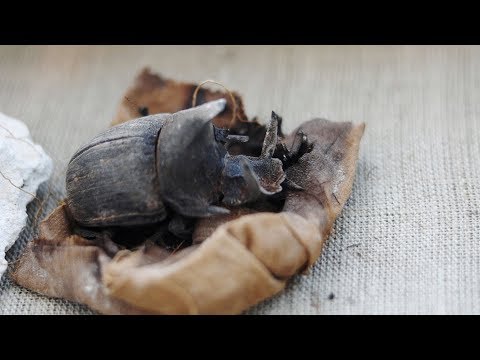 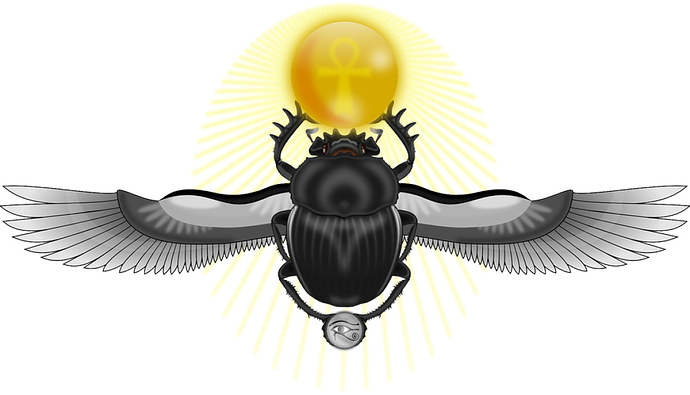 Beelzebub is connected to the Egpytian Scarab Beetle.