Bune possibly a mask of the Athena current?

I suddenly had a feeling that there is a connection between the two. Bune perhaps the Egyptian counterpart as Hermes is to Thoth?

Well I would say Bune relates more with Wadjet. The greeks called her city Buto so you probably have something there with the Greek connection. 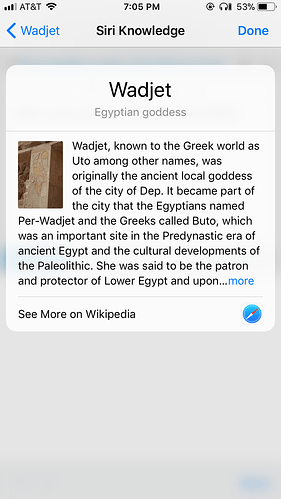 Wadjet in my studies is a protector/battle spirit. So it’s possible she could also be Athena

Wadjet in my studies is a protector/battle spirit. So it’s possible she could also be Athena

Idk why but I feel that’s either right or close to being right.

OK so in following the Greeks I came to discover that Buto the city of Wadjet was the origin place of the ureaus as a symbol of the protector goddess. The Greek version of Wadjet is actually Letona

In Greek mythology, Leto (/ˈliːtoʊ/; Greek: Λητώ Lētṓ; Λατώ, Lātṓ in Doric Greek) is a daughter of the Titans Coeus and Phoebe, the sister of Asteria. The island of Kos is claimed as her birthplace. In the Olympian scheme, Zeus is the father of her twins, Apollo and Artemis, which Leto conceived after her hidden beauty accidentally caught the eyes of Zeus. Classical Greek myths record little about Leto other than her pregnancy and her search for a place where she could give birth to Apollo and A...


So we have come to a situation in which we need to take a closer look at the attributes of the spirit. Following the Greek we found a different mother goddess in Leto.
Are we sure that Bune is Wadjet? We might need to go back to the drawing board on this one.
Do we have another Egyptian goddess that more closely associates? Now much of the sun symbolism is spot on with Bune but could there be one more closely resembling the mask?
Anybody want to take a wad jet it?

OK so then we come across this

Artemis (/ˈɑːrtɪmɪs/; Greek: Ἄρτεμις Artemis, Attic Greek: [ár.te.mis]), in the ancient Greek religion and myth, is the goddess of the hunt, the wilderness, wild animals, the Moon, and chastity. Artemis is the daughter of Zeus and Leto, and the twin sister of Apollo. She was the patron and protector of young girls, and was believed to bring disease upon women and relieve them of it. Artemis was worshipped as one of the primary goddesses of childbirth and midwifery along with Eileithyia. Much l...


Her a daughter of Leto and Zeus. And her Egyptian equivalent https://en.m.wikipedia.org/wiki/Bastet
Which seems closer but Artemis is a moon goddess and Bune is a sun demon. So seeing Leto again in the chain of deity we may be in the right current after all. It’s going to take more research I think.
3 Likes
AdamThoth January 2, 2018, 8:59pm #6

Since Bune is concerned with finance I’m going to look into daughters of mercury and see what comes of it.

She’s also a teacher of necromancy and has a death link.

I think Lakshmi the Hindu goddess could be another mask of Bune. 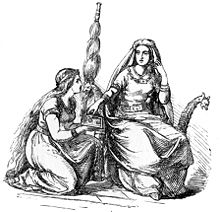 In Germanic mythology, Fulla (Old Norse, possibly "bountiful") or Volla (Old High German) is a goddess. In Norse mythology, Fulla is described as wearing a golden band and as tending to the ashen box and the footwear owned by the goddess Frigg, and, in addition, Frigg confides in Fulla her secrets. Fulla is attested in the Poetic Edda, compiled in the 13th century from earlier traditional sources; the Prose Edda, written in the 13th century by Snorri Sturluson; and in skaldic poetry. Volla is In...

Anuket was the ancient Egyptian goddess of the cataracts of the Nile and Lower Nubia in general, worshipped especially at Elephantine near the First Cataract. In Ancient Egyptian, she was known as Anuket, Anaka, or Anqet. Her name meant the "Clasper" or "Embracer". In Greek, this became Anoukis (Ανουκις), sometimes also spelled Anukis. In the interpretatio graeca, she was considered equivalent to Hestia or Vesta. Anuket was usually depicted as a woman with a headdress of either reed or ostrich ...

I would like to share something important about Bune for those who are confused. He has no origin in any of these ancient Gods. He is just a demon with horns, red, hairy chest, and a long tail. He looks viscious. I have found this out from a powerful Guru who has seen him in my home. I have accidently almost invoked him by drawing his sigil as i was researching about him. He may appear to you as a beautiful woman but that’s not his true form.

May I ask you something?

Do you mean me?

I would like to share something important about Bune for those who are confused. He has no origin in any of these ancient Gods. He is just a demon with horns, red, hairy chest, and a long tail. He looks viscious. I have found this out from a powerful Guru who has seen him in my home.

With respect, many of us on here have worked one-to-one with Buné and found out for ourselves that she is a goddess, even though she will sometimes take forms where that’s not immediately obvious, sich as a many-headed dark copper-green snakelike being.

I have met with some of her children, as well.

What your guru, who is presumably adherent to a religion, tells you to state as fact, is not the same as experiencing a spirit for yourself.

Buné arranged for me to continue communication with my deceased parents, creating an astral body for their Higher Self, and has done many other amazing things to help me with both personal and larger-scale workings.

Maybe he got the wrong being?

In any event personal experience, esoecially wqhen it leads to verifiable results, is more useful than taking on faith what someone tells you.

how can an ancient Goddess appear in such a way… a snakelike being?
I am not saying that you are doing something bad or that Bune is evil…
I am just saying the truth about his appearance… it shouldn’t matter anyway because Bune may be very helpful as long as you Show him respect. I trust this Guru a lot, and he has seen him with his third eye which shows the true form of a being
He is absolutely sure that it is him and he had to cleanse my home because i got too afraid

how can an ancient Goddess appear in such a way… a snakelike being?

Many Egyptian gods took animal forms, or part-animal, Hathor was commonly shown as a cow in her earliest imagery and only later became a cow-headed woman, and then a woman with the ears of a cow.

The strange thing is that I wasn’t expecting Buné to be a goddess, I originally went to her realm for help with something as suggested by Belial, and at first I thought Buné was, indeed male, it was only when I talked to one of her children, and then worked with her more, that I learned this.

Buné seems to be a guardian of inheritances, including genetic heritages, and linked to Wadjet: I am keeping on open mind on the other links suggested here, because I’m also just not that into trying to see spirits as masks of each other, but the Wadjet link, and the guardianship of spiritual and genetic inheritance, I have witnessed myself.

As for showing respect, I respect and have even developed love for her, but not of a grovelling type that would keep a spirit playing a deception game – Buné has done far more for me than I could possibly do for her.

And obviously I have no interest in trying to tell you what to believe about Buné, but I do advise you to be careful when someone who is a religious person, however sincere and well-meaning, attempts to convince you of a truth about a being who is not part of their worshipped pantheon or belief system.

I also see spirits and communicate with them, as do many here, and sometimes we perceive different things, but because we are having this experience personally it is more in the nature of research to compare notes rather than insist a thing is right because someone else said so.

Anyway I’ll leave that there, I hope your home feels better and that whatever malevolent force was bothering you has stopped, I don’t know enough about the events to comment whether it was Buné or one of her children, because just as you may be friendly with one person and not with another, so the demons, gods, and other spirits also have their reasons.

Do you mean me?

Yes you. Do you decide what’s true?

I have not experienced any negativite energy in my home

instead i did not even feel anything… Bune resided in my home for 3 weeks and i haven’t even noticed it… probably because i didn’t invoke him 100% it was not my Intention to invoke him so fast, but as soon as i have shown some interest… he has come into my home and i found this too fast, intrusive and i felt like my private space has been invaded. I have sent this Guru some pictures of me by coincidence and he has felt something in my home. And he was 100% sure that it was Bune. This is why i freaked out and left my home until he has cleansed it. It is my fault that i got too scared after he has explained to me how he looked like…
The Guru has been doing this for many years, he only believes the Hindu Gods are the true Gods and everything else is demonic hehehe he has also fought with a lot of Demons himself

Ofc i do decide what is true…

The Guru has been doing this for many years, he only believes the Hindu Gods are the true Gods and everything else is demonic

Hmmmn… you can probably guess what I think of that.

I have been doing magick for 25 years, so not exactly a beginner, and I don’t find things fit into such neat categories as “completely good” and “completely bad.”

But what a person believes can affect the way they act just like if someone approaches a person swearing at them and calling them names, they will NOT see the most friendly and helpful side of that person’s character!