Breaking Down My Portable Ritual Altar

I’ve talked about it before, but I think it’s about time I did a full breakdown of everything about my portable ritual altar. 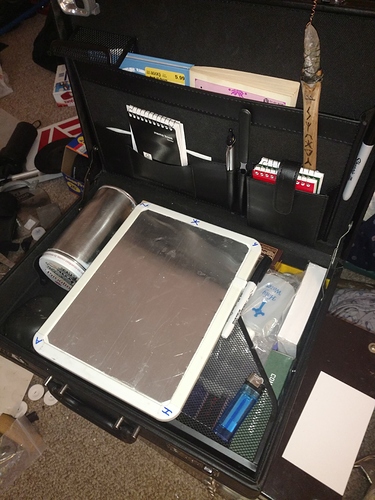 The altar surface is sheet aluminium, consecrated with solar eclipse water to strengthen and focus the energies of any working done on it. The five elements are also bound to the surface by the symbols on the border of the altar top. (I later plan to bind a spirit to the altar surface as well)

Underneath the altar surface there’s a container that has several chime candles, string, nails, some crystals and stones, and some other such things that I deemed useful enough to include. There’s also some thin books and some index cards as well as a ruler, a small bottle of holy water, and some small boxes for storage space.

In the tin next to the altar surface I have 24 tealight candles and a snuffer for them. Next to the tin I have my anchor stone, which condenses the immaterial into a closer proximity/relation to the material (makes magick easier to do and access in the location the stone is at).

In the lid there’s a light and some small memo pads, as well as a thin athame, my lightning wand, a pen, and some more book storage.

Everything is consecrated to the point where it’s very presence makes my brow buzz when I look at it, and all the workings I’ve done on it have been stupidly potent and unexpectedly expedient in the manifestation.

It took a while, but I think I did a good job on it.

13 Likes
Doing magic with limited place and supplies - looking for ideas
So I walked into an occult shop yesterday
Pictures of Altars
Introduce Yourself To Members Of The Forum
JezebelleMoon March 11, 2018, 6:31pm #2

Well done. I’ve considered making a small “pocket altar” in an old altoid can that I can take with me to the nature preserve at my school when I want to go there after class.

Yours is way more awesome.

Yours is way more awesome.

Thanks. I put a lot of time into getting everything to fit inside a briefcase in a manner with which it can still close up, as well as all the magickal enhancements to everything.

It’s not really suited for worship-type stuff, but for normal workings, it’s great.

Veneration has its place, but collecting everything you need for application in a portable form is a good move.

This is so brilliant, thanks for sharing the update - bookmarked!

Honestly, the whole idea behind it was to basically be able to take my practice with me when I go somewhere without much issue. I mean, I doubt I could take it on an airplane, but if I need to, oh say, drive up to my mother’s house for a few days or something…

I have a pocket altoid tin alter. I have salt and pepper packets and some other items in it. Use old perfume viles to store black salt - protection oil and any other oil you may desire… I have a confuse and bind powder I like to use with my black salt.