When setting up a bovéda must I use a white table cloth to sit my glasses on?

Must I use flowers?

A white cloth can be used for a Boveda but really its more necessary during a Misa Espiritual.
A Boveda has a function for spirits in our courts that have no blood relation to us, typically several cups of water are used on the Boveda these different cups represent different types of spirits with us. Spirits of labor, light, peace, intranquility, dark ect. The different ways that the cups are arranged will put out a different effect such as repose and defence. The Boveda is actually a part of a separate tradition from Santeria, the tradition it comes from is Espititismo or Spiritism. For those who practice Santeria the Boveda serves the different courts outside of Eggun and Orisha, the Lukumi name for these spirits is Iwin (pronounced Ee-ween)
Flowers do not always have to be given though it is good to place a floral offering on occasion. Also plants such as a growing potato, yam, or bamboo is good to place representing growth.
A candle for light or guidance is advised, incense and sage to purify and keep spirits satisfied as well.
Not all of Spiritist practices but the majority in the Caribbean was influenced by Hippolyte Léon Denizard Rivail who was a French educator who went by the nom de plume Allan Kardec, which was actually the name of the Celtic spirit guide who walked with him.

What about the crucifix and Rosary beads? I thought those were a staple for bovedas as well, no? I also include pictures of my relatives (blood and non-blood) on my table.

This is what I thought as well.
Crucifix in the bigger cup and pictures of the saints or Statues of the Orisha

Not all Santeros but most Santeros practice more than one religion, it is common for practicing Santeros to be practicing Catholics as well. So yes often times statues of Saints or Saint candles will be placed on the Boveda.
Each Ilé or house is different, in my house we say we never hide the Orishas behind the Saints. Thus Orishas are housed their own way and the Boveda serves for the other religious parts of a Santero or Santeras life such as Catholicism, Buddhism, Hinduism ect. 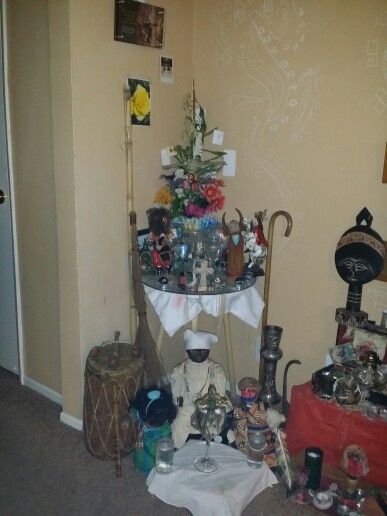 Must it be kept where there is alot of light?

My general practices are done in a dark room

I would recommend light be a major component, only because the dark will have an influence on those spiritual courts. Even if the light given is via candel light.
The water should be changed every 7 to 9 days, also the water should be slowly ran off of your hand while it goes into the glass.

Can it be tap water? Is it the meaning behind the water or is natural water a must?

Yes absolutely, tap water is what is typically used.

Water is like amniotic fluid for spirits. You will know if the spirits are present if bubbles have manifested all over the sides of the glass making it almost look like a carbonated drink
Heres another photo for an example of the bubbles. 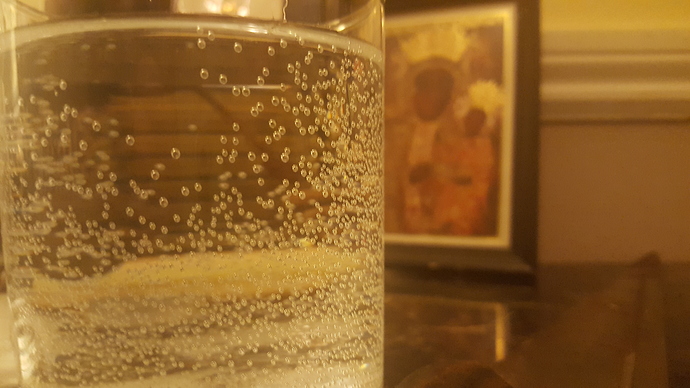 That’s probably the most elaborate one I’ve seen yet. Kudos to you, @PaterOctavius888 !

No one has mentioned Florida Water yet. I use that prior to any time with my boveda so the spirits ca capture my essence. Does anyone else use this?

Thank you @Stfnwlf. Yes Florida Water(I like to make my own but I will use store bought too) and different perfumes and colognes as well as Cigars, leaving shots or small glasses of Rum, Bourbon, Gin, Vodka and other “Spirits” and sometimes even putting food, candy, and fruit on the table too.

So what are the do nots?

What can be gained from all this?

For me, the boveda is my connection to all my spirits, guardian angels, and ancestors. Without it, it makes any works more difficult (in my opinion). But it’s an opportunity to talk with them, show respect to them, and listen to any messages they may have for me on the paths of my life.

Don’t get naked or have sex in front of it. Don’t put blood to this shrine.
Before addressing the spirits tap the table twice with your palms out ontop of the surface, if your having a prayer session at the table sit comfortably in a chair and do not cross your feet or hands, in affect keeping yourself open to the flow of guidance from the spirits. You may get small messages or images in your minds eye for example, a spirit at the table asking for bread and butter or maybe you’ll see an image of a native american in your minds eye, if so put something symbolic of that court like a dream catcher kachina doll.

Can this be set up next to my regular altar on the same table? Or is that offensive to these ancestor spirits and they prefer their own space?

Next to is okay, just understand that traditions can coexist beside one another but they should be celebrated separately.
When Espiritismos who are also Olorishas hold Misa Blancas they don’t do Bembes for Orisha at the same time, it is a similar practice but it also is a different hat.