Has anyone worked with him?

I’ve only found a couple of texts with him mentioned and only one sigil. 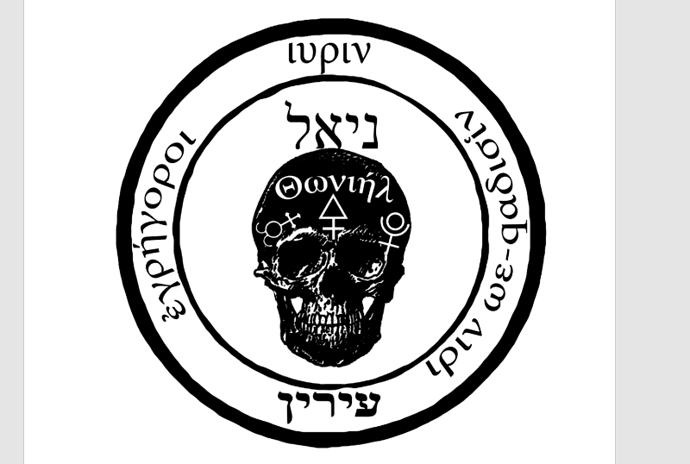 all I can provide is a transcription of the hebrew : Zurich. idk what that is, but i’m sorry I can’t be more useful lol

oh, and the top hebrew (which I missed) says Nial or niel (el is a common ending for angels that mean of God. Ex: Michael, Gabriel, Uriel, ect.). These seem like names

Bezalial could be: He despises El(God), or He who despises God. But, I am using google translate so idk (probs wrong)

This gives me an idea about evoking him

The text on the left: Εγρήγοροι it’s a name for the angels (Enoch)

Right: Ιριν ωε-qαδισιν it has greek letters (except that “q”) but it’s not a greek word and it doesn’t mean anything in greek. The explanation is: Irin q.v.-Qaddisin. Irin Qaddisin are twin angels the “holy watchers” and together with the twin Qaddisin (q.v.) they form the supreme counsil of heaven. They are higher than Metatron.

I know the guy

Zurich? The city in Switzerland? Oh yeah - If put the English in Google translate you get ציריך

Doesn’t the Hebew above the skull say Nial? That’s a Celtic name. Wikipedia says it’s damaged, but where did an ‘n’ come from? ניאל Unless someone mistook a B for an N because they look kinda similar in Hebrew.

If Bezaliel was there I guess it would look like this: בצלאל

The earliest known form of the city’s name is Turicum , attested on a tombstone of the late 2nd century AD in the form STA(tio) TURICEN(sis) (“Turicum tax post”). The name is interpreted as a derivation from a given name, possibly Gaulish personal name Tūros , for a reconstructed native form of the toponym of *Turīcon .[18] The Latin stress on the long vowel of the Gaulish name, [tʊˈriːkõː], was lost in German [ˈtsyːrɪç]but is preserved in Italian [dzuˈriːɡo] and in Romansh [tuˈritɕ]. The first development towards its later, Germanic form is attested as early as the 6th century with the form Ziurichi . From the 9th century onward, the name is established in an Old High German form Zuri©h (857 in villa Zurih , 924 in Zurich curtem , 1416 Zürich Stadt ).[19] In the early modern period, the name became associated with the name of the Tigurini, and the name Tigurum rather than the historical Turicum is sometimes encountered in Modern Latin contexts.

Originally from the book of enoch… lots of controversy over all the different translations… fun stuff.
Waching this right now.

Interestingly I kept typing Bazazel and changing it back to Bezaliel, but it turns out to be a variation of the name.

i did find a lot of name variations for him, i just choose the one that i came across first

are you saying solomon as in the sigil may be that?

Found it in a book called “Fallen Angels: watchers and witches sabbat”

It honestly depends on the individual and how familiar you are with each other. With “outsiders” he’s a lot more distant, barely ever making contact with other people. He’s quiet, keeps his words short, and appears to have a serious manner. A very mysterious being. With those he’s more familiar with, he has no problem with talking, laughing, cracking jokes, and giving thorough answers. Although he still holds his sarcasm and some of his serious tone. He does not take well to the authorities of others, I know that for sure. He’s incredibly wise, and would rather have you figure out the answers, even to the point that you feel like he’s abandoned you in the process, but he has not. His aura and voice are very soothing…unless you get on his bad side.

Hmmm…looks like you guys decided to create a new Spirit trying to merge Azazel and Belial. To tell you the truth never heard of this.

He’s not a new spirit I believe. @Meowlix

@Ravens_Keeper how’d you evoke him? do you have a sigil you can share?

You’re right, he’s definitely not a new spirit. As for evoking him, sorry, I can’t give any tips on that. I simply think of him to come to me, and if he can, he does. That’s how it is with me and most spirits. Besides, the knowledge on evoking him is basically non-existent due to the fact that, like I mentioned, him and human bonding, not really his cup of tea

What are the Sources of the Texts?

yea, Nial is the name above the skull, while many of the letters are quite similar, I am sure that is the letter nun. But otherwise, I have no idea about any of this lol

The only text he was mentioned in that i found are

fallen angels: watchers and witches of the sabbat and there was one other book but i cant remember

Hmmm… The book published is only approximately 1 1/2 years old. The mention of the spirit is very recent.