Belial - A very small journal from a Belial newbie

I have been having a few major issues with two colleagues, one in particular is in a position of power over me. (I know - give me a sob story about a bad workplace).
So, I figured who better to call upon than the mighty Belial - the one without master, to remove my ‘masters’ for me.

However, this is going to be a journal of sorts.

I have evoked Belial tonight, and have made him a very basic offering bowl (Pictured below) and I have this intuitive feeling to record the results. What better place than here? 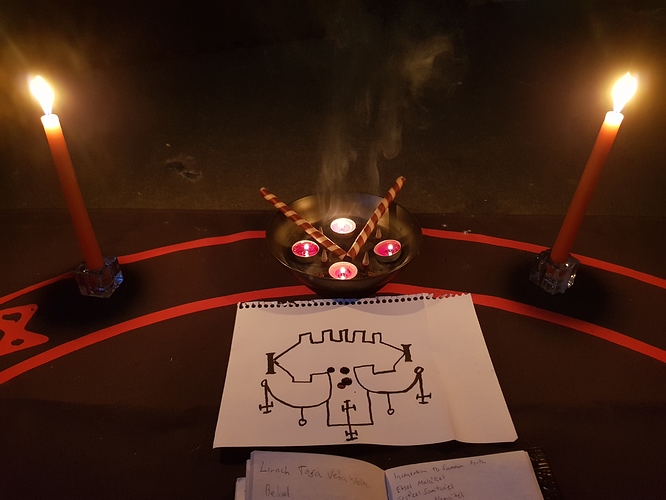 The basic ritual;
I sat in my circle with Belials sigil, his enn and an incantation that EA Koetting gave.
I lit two orange ritual candles and I began to chant his enn.

Almost straight away I felt the air dampen as if it had suddenly become hot and humid in my ritual space, so I continued to chant his enn and recite the incantation.

I did not hear nor see Belial, but I did feel a harrowing feeling that something was listening, so I told Belial the basics, not wanting to cause him to wait around and listen to a sob story.

I asked him to remove these colleagues from my workplace, as I feel as a slave would working with them.

I listed a set of things I would do for Belial if he could follow through.

I left the incense to burn until finished and left the bowl atop of his sigil on my altar at the end of the ritual.

I will update as soon as/if anything happens.

As I said that I would keep everyone updated on this, here goes;

4 hours into the future will mark the 7th day after making this offering to King Belial, and so far, unfortunately, absolutely NOTHING has happened.

Very dissatisfied with King Belial so far, unfortunately, especially since he is kept in such a high regard.

I feel as if this may, for me, be a failure in it’s entirety.

You need to have patience. Magick isn’t always spontaneous. Depending on what it is you want, sometimes it will take weeks or months - maybe even years - for your results to manifest. This may be because the entity needs an opening - an opportunity to actually work on your result.

Getting upset isn’t going to help you in the slightest.

4 hours into the future will mark the 7th day after making this offering to King Belial, and so far, unfortunately, absolutely NOTHING has happened.

Yeah,sometimes things need a little bit more time to manifest, especially if you deal with a lot of different potentials that have to be evaluated from different angles.

Honestly, I can’t say I’ve had all successes with Belial either. In fact, I briefly debated not working with him. Sure, he might show up and listen, and you could even make offerings and this and that, it doesn’t mean he is actually going to do it. You can’t just order him around and expect him to deliver like a vending machine. If he thinks the request is stupid or something, he is just going to give you a hard time.
If I were Belial, I would wonder why you are working there in the first place, sure I’m sure you have perfectly good self justified reasons, but that doens’t mean Belial thinks they arn’t bs.
And yeah, I asked him to make two people friends again, he said no, then I asked him why, and he said yes, and then well, lets just say he didn’t do it.

An interesting development has occurred within this situation.

A good friend of mine, a work colleague committed suicide on Monday. May he rest in peace.

However, I am wondering how this will affect the work place dynamics, this may cause some colleagues to throw in the towel.

Your workplace sounds horrendous. Hope things progress for you and I really like Belial and he always guided me in the right direction for changes.

I had something similar happen in the workplace but I’m not so sure it was Belial.

Had a really shitty head foreman at my last company I worked for. When I started doing a lot of reading on Belial I remember thinking very very ill thoughts about him.

Then not but maybe 3 or 4 weeks later his father passed.

Fortunately, one of these specific co-workers has gone on leave for 3-6 weeks, I plan on capitalizing on this by performing some baneful binding in order to keep him bound away.

Maybe Belial would let you ask Orobas to make you popular with and favored by the oppressive duo at work.

Sorry about the friendly colleague that died. This work environment sounds toxic.

Hang in there, but consider applying for other better jobs perhaps.

This may not be specifically Belial. related ,but I have an idea for your colleagues. Get each of their photos and do a ritual with them all going into a Jar with Black Dog hair to cause fighting between them, Goofer dust and some chillies.

Use a Demon or 2 to cause fighting and disharmony between them all and sit back and watch them turn on each other.

I have had success with this and then left or went on sick leave quite quickly.

I have performed a curse on these two already using their pictures, names, etc.

However it’s manifestation isn’t going to be quick.

You can do more for a layered approach using different spell, petitions and different spirits to go for different parts of the take down.

I usually try to avoid baneful magick, but these two are next level cunts.

Nothing wrong with blasting people that make your life harder for no reason. You have a gift and talent, use it. I used Lucifers touch, it works well and if you want it I can PM you later

Sure thing - I’d love to know it. Anything to add into my arsenal is always welcomed. Thank you.

Hey there, mind sending a detailing of ‘Lucifers touch’ i think it would be interesting.

sure. I need to find it and type it out to you ,so it will be later this evening.

Thanks for letting me know.

However, to be blunt, I don’t use tabacco in rituals through smoke, I use it as the traditional spiritual plant it was, before it was inhaled.

In case you didn’t know;
In many teachings especially Native American Indians, the smoke from burned tobacco has a purpose of carrying thoughts and prayers to the spirit world or to the Creator, and was often used for healing and had a very high spiritual importance.

When used appropriately, traditional tobacco is not associated with addiction and adverse health impacts, at all.