Being swallowed by beings

Ok so ive hit the search feature looking for an answer. Theres a few who this has happend to. By different beings swallowing them.

Sitting down last night closing my eyes calling on my god self. Eyes roll back in my head and im in pitch darkness. I call for my god self again.

Then a black dragon forms from the darkness. It looks like a chinese dragon serpent like. Its body like a snake. It opens its mouth and swallows me. This does something to my physical body and takes me deeper into trance.

I find im in a void again within the stomach of this dragon. Then another black dragon appears. Bigger than the last. Large with black wings glowing eyes. It opens its mouth and swallows me. Again this effects my body and takes me even deeper into trance.

I find myself in a black void again. I see a massive eye open and look at me. This eye is huge. A 3 story high eye. It moves lifts its head and i can see the details of its face. Another black dragon. Different from the last two in looks and appearance. Its wings cover the void. It looks like it is the void. Face covered in black spikes that seem to look obsidion like. It opens its mouth and swallows me.

Thats all i remember.
Who is my god self? Im not sure.
Ill do this again and see what happens.

Why do i keep getting swallowed?
I know it takes me deeper into trance and i come back feeling different.
If anybody understands the mechanics of it and can explain would be much appreciated.

you’re describtion refers to Jörmungandar, (the norse world-snake),
for what i get.

Maybe it’s not exactly the dragon,
but it seems similar enough for me to stick to that at this point.

If it really is that one,
the name will resonate with you directly,
and you’ll find yourself recieving telepathic comunication,
just from looking at it.

Regarding the “Swallowing” & being swallowed.

It means to take you into itself.

It also - in terms of trance and deepening connection,
is that same effect used in hypnosis,
where due to re-awakening and dropping back in,
deeper each time,
you’re being grounded into the expierience.

In terms of Void and Abyss,
it means to sink,
to descend down into it.

Your true godform must be pretty dark,
or at least aligned with a very dark plane,
from what you describe.

After all you’ve had to be re-sinking at least 3 times,
in order to get to the specific plane,
you were accessing to get to communicate with your godform.

Note, that those impressions are normally harmful,
except for mages which already belong to that deep of a plane of the abyss.

A regular person (muggle) would die from the expierience you’ve described.

For what you wrote, i’m certain, you won’t.

For you, it’s just re-accessing your true real form.

And you’re actually descending to it,
because your current frequency was to far seperated from it.

You’ve passed out,
either because you couldn’t reach it.
(couldn’t go deep enough),

Or because your concious mind wasn’t able to comprehend.

So try to cleanse your mind and emotions,
before each new try,
in order to open up enough blank space,
to enable your ability to comprehend what’s going on.

Thank you for your reply.

Jörmungandar will look into it.

Strange thing is when performing belials black alchemy. The messages i get from each Qlipha “Rise black serpent” from each one and thats all i get. Performed multiple times. Same messages.

I posted a youtube link today which spoke to me on a energetic level. I just rewatched it. It was way stronger this time.

Appreciate your response, very helpful.
Will take your advice. Cleanse mind emotions before each session.

Even have it coming up in my mind without hearing any real music sometimes. (earworm)

I’ve experienced something somewhat reminiscent of this, though probably not the same thing.

Azazel took me to an underground cavern where a half-snake half human deity swallowed me, dragging me under water to do so. I saw blackness inside her and felt digested as my flesh and bones dissolved. She spat out a ‘core’ that was left, I regenerated and she swallowed me again and again spat out the core to regenerate. She said she was ‘the lady of the lake’. Looking up Nimue, she’s a healer.

My sense was it was the regeneration that was important, that was was recreated was cleaner and truer to a template I had chosen and was now missing some scarring that was blocking me.

She invited me to go back and repeat it and the idea seemed to be that thi wasn’t finished and would take many repetitions to do. It was a cleansing, a disposal of what did not serve me well, which is why I felt different after coming out of it. Some baggage was gone.

I would repeat it, sometimes, with the intense ones like this, when it’s not new anymore you have time to notice more detail instead of having to put that mental effort into controling your shock.

@Yberion looked up Jörmungandar saw an image of a black serpent when reading the name. 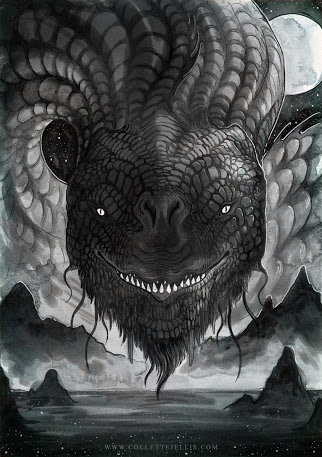 Looked similar to this picture. Different from the ones in trance the other day. But the Norse beings do intrigue me. The word Ragnarök makes my energy buzz

Theres clearly dragon symbolism playing out in my reality. Walking outside seeing a dragon created by clouds in the night sky last night. Taking notice of a dragon at work yesterday on a display stand thats been there forever and not noticing it until now.

Sinking into the abyss as i fell asleep and
Waking up this morning with a black dragon in my minds eye. New ideas and thoughts when waking this morning.

Which will be tested tonight.

Asking Azazel who my god self is “youll find out soon” and then laughing hahaha.
Fair enough i can see his point. (Do the work)

@Mulberry
Thanks for sharing.
Intriguing

I have been asking to remove all that is no longer neccessary. This could be the action taken from me asking.

Feeling very different today and being told to enjoy it. Past couple of weeks has had alot happen.

Will continue to dive deeper and see what comes next. And find the answer im looking for.

Next time it happens will take note of the details as you have suggested.

Thank you for your input.

i found this to give you further answers:

I have been asking to remove all that is no longer neccessary. This could be the action taken from me asking.

combined with Maulbeere’s gnosis,
it’s safe to say, that this is exactly what happens.

I had a dream last night that was a bit similar to your experiences.

In the dream, I had a superpower that allowed me to withstand being inside black holes and I decided to help NASA research said black holes. I went inside and met an eye that was three stories high. We spoke and it told me that it and its brethren created black holes to feed. I wanted to see what was behind the eye, but I couldn’t get around it. Regardless, I was excited to share my findings with everyone. Then the dream ended.

I have been swallowed by many deities and I myself have swallowed many, it is common in shamanism to be ripped apart and killed see it as a psychic death/surgery.

True, in Shamanic Rituals those things are rather common.

@Yberion Thank you. Spot on Validation from sources of answers. Also validation from what Belial has told me. Just a little shove to move forward.

Regarding Jörmungandar by researching the following presented itself. Again to do with consuming.

The Ouroboros or uroborus (/ˌ(j)ʊərəˈbɒrəs, uːˈrɒbərɒs/) is an ancient symbol depicting a serpent or dragon eating its own tail. Originating in ancient Egyptian iconography, the ouroboros entered western tradition via Greek magical tradition and was adopted as a symbol in Gnosticism and Hermeticism and most notably in alchemy. The term derives from Ancient Greek: οὐροβόρος, from οὐρά (oura), "tail" + βορά (bora), "food", from βιβρώσκω (bibrōskō), "I eat". The first known appearance of the ourob...

Appreciate the time and effort.

@Prophet
Syncronicty with what you describe. In that ive had thoughts of consuming with darkness. The idea was for consuming, casting, dismantling, becoming. Interesting about the eye and the beings there. Thank you for your input.
Appreciated

@Titan.M
Also another syncronicity. After being consumed. the thought “What would happen if you consumed your godself?” Verification.

Thank you for your input.
Appreciated.

Lots of work to do