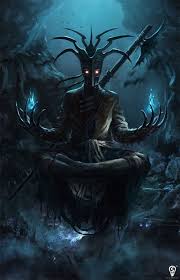 Starting out most people have views on magick generally color by the cultures they live in, as such this can result as a source of inspiration to pursue magick for spiritual growth and exploration.

But depending on where a person is coming from exploration begins from a point of curiosity and possibly fear or terror.

If for example a person is raised in a christian/cathoic environment the ideas surrounding magick as “tools of the devil” may be lodged in the subconscious and act as their starting assumption resulting in it coloring all their thoughts from this point on with this assumption. Like the idea " in order to gain power you must forfeit YOUR SOUL TO SATAN/THE DEVIL/EVILLLLLL " or that you must make lifelong pacts with demons to get anywhere in the practice of magick.

is what is known as a false assumption which can lead to coloring the entire experience of exploring systems of magick in unfounded terror. Also the idea that only a pact with an nonphysical entity will gain you any power will do only plant the crippling idea that you YOURSELF have no power to change your fate without the help of outside forces. Operating from this false assumption also makes it alot more difficult to explore systems that focus on harnessing one own power.

Another false assumption that is portrayed in media formats as books and movies is that magick will solve all your problems instantly.

When this assumption is carried over into the practice of one starting out it leads to impatience and lusts for results without laying a foundation.

The post below has some resources that can help those starting out.

Makin a seperate post for all the free Video reference material that keeps gettin hurled at me from various podcasts and youtube channels to keep the other post thats is majority community contributed info and posts. Playlist with videos on topics ranging from pricniples of meditation in regard to ritual, the elements of ritual,divination and energy work. Playlist with some basics on traditional western astrology Some videos on vedic ast…

I agree with you…that’s absolutely true. Those false assumptions are intentionally there… the ones who has power over the masses - mainly Priests and Politicians - can’t risk giving up this power by allowing people to discover their natural abilities to create their own reality and take control of their lives and destiny. They need to keep them slave, begging God or Government for mercy out of guilt,fear or fake love. It’s not a coincidence that those assumptions and false beliefs about magick always existed. And probably will always exist.

It’s not a coincidence that those assumptions and false beliefs about magick always existed. And probably will always exist.

The thing is they haven’t always existed there are fairly resent in the large scale of time of human historu. Only the last few thousand years or so, about as long as the monotheistic cults of “da one god” have been around. When ya dig back before them alot of cultures had polytheistic cosmologies about how things worked. And with how people are continue to evolve spiritually i have a hard time beliving the cults of “da one true god” will always be around. People are able to connect in ways now that suppressing the knowledge and keeping everyone in the dark is a bit far fetched.

That being said there are people who prefer to remain ignorant of things cause they find comfort in their ignorance. How i have no clue.