Are Demons truly your friends and wellwisher? READ THIS

Demon cone fron the Greek word Daemon meaning “Friendly spirit” it was “Demonized” by the Christian’s most (if not all) known Demons once took a different name example, most believe Lucifer was Eosphorus the God of the sun.

The only thing that makes demons so “bad and terrible” is you, you who have walked into the ritual with the belief these are evil beings and hell scourges.

Try just speaking to one you will learn alot then make your assumptions. 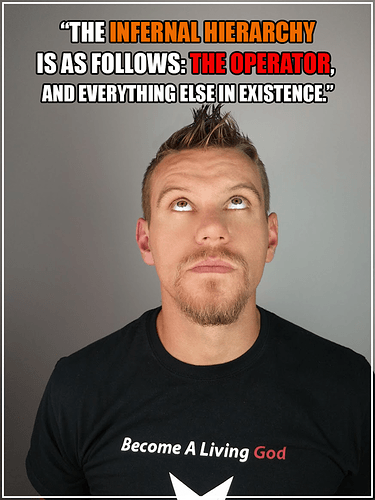 You call him a fool, but he isn’t the one summing beings who as endless sources say, tried to take God’s own throne, and serve the devil, which wants your demise.

Who’s that idiot God who creates beings, knowing in advance, that they will try to “take over his throne” and serve a Devil that he also created and knew that he will go against him and cause all that B.S you read in the so-called holy-books ?

An advice coming from a brain that accepts and believes this nonsense? No thank you !

People are not your friends either,and they are absolutely not trust worthy unless they have something to gain from you,but also that doesn’t mean that everyone wants to hurt you. Even the nicest person in the world,has his “kindness limits” and if you don’t treat him right he won’t do either.
And this is from someone who has been very socialized in his life with dozens of people around him over the years.
Any kind of relationship in this world is about giving and receiving.

Yeah i read this one last night. Came across it on the internet.
I find the statement of this person who originally wrote it very judgemental and ignorant.
I think when dealing with demons it also depends on your own mental state and expectations. It’s like projecting bad things, characteristics on these demons as if they were scapegoats.
When you come at them with negativity, hate, fear, they probably amplify that.
I’m sorry but if someone would come at me rude, nice is not what you’ll get back. Pretty much the same i would say. Respect is important.

The one who said that seems like someone brainwashed by the Christian doctrine, specifically the Old Testament. Yahweh the tyrannical jealous god. The same god who taught people that praying to other gods is a sin, same god who said angels are good and devils are bad. The god who taught us that life is black and white, good and evil.

Daemons rebel but have served humanity since the beginning. Offering tools and guidance that we wouldn’t of had without them.

Now I can digress and assume it’s only because of tainted perspective that they’re assumed to not be fully trusted as delving into the history of them seems to come from a place of that isn’t your “graceful” cup of tea. They’re there as they are without sugar icing on top like fictional characters or other beings.

They’re essentially an existence with a set of assets and an autonomous nature. But as with a violent person, or a wild, threatening animal, there very well would be energies that’d be of dire malevolent presence, even places in the astral where they’d exist. Weird looking creatures and insects etc… These energies are within different paradigms and I’m using the word “energy” as an umbrella term.

I think much of this is correlated with religious beliefs on the topic in relation to what’s assumed a deep state government that pushes agendas into the media and their celebrities so it becomes icon worships (superstars).

In hiding, they practice their craft and worships these entities or deities much like it’s still the Egyptian, or Babylonian era — where all kinds of sacrificial and pedophiliac rituals were done. What’s also in hiding could also be in plain sight symbolism.

This is another story. But I won’t falter at evidence I’ve seen with my own eyes that the government and occult are primarily a dyad of human advancement and sinister ploys upon humanity at the same time, especially the people who try rule them out.

The government, scientists and many internationally-backed enterprises have unruly used magick on their workings and humans in disguise of entertainment as well, but do not be televised by my rambles, it’s a hypnosis. We’re all asleep here, as much as we think we are somewhat awake, or getting there… pause for a second. Enjoy the moment

Christianity and all its hebrew mediums, are forms of slavery. They will have you think that anything that can empower you is wrong.

Certainly sounds like a Christan wrote this to scare people off. If you ever heard of Anton Levay, the founder of Satanism, had a “friend” who said while he was dying on his death bed he said “What have I done” and was surrounded by demons laughing at him. Implying he made a mistake teaching others about Satanism.

Turns out this friend of his was a Christian. Fear is a common tactic Christians use to brainwash us into converting or joining their dogmatic, racist, homophobic religion. Lol sorry for the rant

As a newbee, I already decided to go into this seeking knowledge only from demons. What ever comes from that, well, I shall see.

Welcome @SEloha1969. I see you joined us back in April but this is your first post. Please post an introduction in the NEW MAGICIAN AND INTRODUCTIONS area, and tell us about yourself and any experience in magick you may have. It is a rule of this forum.

Treat demons like people. If you show no respect or trust, you will get treated the same. Some people can be shady, some demons can be shady. and all depends on how you act and how they feel about you. I’ve met very few spirits who would cause harm to a human that treated them right.

There are demons that’ll help u more than a pastor or religious person ever will and there are evil demons that may not be suitable for you. Same with humans. It’s putting all demons in the same cookie jar which is not right, it’s like stereotyping a race. Religions need to stop spreading their hypocrisy.

Christian bullcrap detected. I always laugh when christians talk of their god as if it was some kind of pure, benevolent being. It only shows they haven’t even started reading their own bible.

All relationships are vibrational. Demons don’t just decide to do something to you on a whim. When you develop a relationship with any entity that isn’t human, it’s a mistake to treat the relationship as if it was a human-to-human relationship, because it isn’t a human relationship. Betrayals, loyalty, etc are irrelevant in these types of relationships. These are human ideas. Demons, angels, elementals, jinn, etc do not have human ideas. If you seriously believe that your matron or patron demon (for example) loves you so much and is so loyal to you they would shun another’s command to attack you, then you’re being delusional, and you’re projecting your human ideals onto them. Which is a bit unfair, considering that it’s impossible for these beings to disobey a person who is so in tune with his inherent nature that he can command universal forces to do his bidding with ease. Universal laws do not allow that.

A demon will do what it is commanded to do. And if nothing commands it, it will follow its inherent nature/vibration and the rest is up to forces of attraction. Energy goes where your attention flows, and matching energies/vibrations attract like BOOM.

If you fear being possessed, at some point you may find yourself possessed - usually a low-vibrational being or a parasite. If you can’t get a certain demon off your mind, then you are inviting it via vibrational entanglement. If you have an enemy who works with the same demon as you do, you may find the demon working against you at some point - but only if your enemy decides to command it to do so, or if you fear that happening.

If you know and intend that a demon be your friend and well-wisher, then it will be. But you have to vibrate that as purely as you can.

Only speaking from experience.

Spirits are just like us. You aren’t going to get along with every one you meet, and one person might have a great relationship with a spirit that would screw with you if given the chance because said spirit likes the other person, but doesn’t care for you.

I don’t see any reason to be any more or less trusting of spirits than humans.

The only beings I automatically trust are dogs. You know what they think of you when you walk through the door.

Other beings, I may or may not open up. Depends on our particulars. It’s entirely subjective.

Honestly in my experience trust is relative with each spirit or entity. Sometimes a good or bad relationship can also come from an unexpected place.

Well that’s funny, I disagree totally in what you said here. Firstly most parasites and entities that will cause problems are the lower level entities.
And there is a total difference in human hierarchy and how they act towards the ‘normal’ people, then when you look at higher level spirits. Higher level spirits teach and they respect you if you respect them…

My answer to this would be look at the supposed motivation and reasoning.

Are demons evil because they have an inherent motive to cause harm to people for no other reason than that? Humans can only want to hurt people because they’re just dumb like that, but we can agree that it’s a very limited, un-nuanced way to be. People have said that fear or pain can feed certain parasitic entities, but they are low vibrational emotional energies. You can go higher and subtler and more complex. Why would these demonic beings we work with have access to and give us so much knowledge if all they were interested in is the (rather basic when you think about it) motive of causing pain to weaker beings? Bullies can get some satisfaction from doing that, but there’s more to life and these beings already know more than we do.