Angels of wrath: destroy with wrath

Hi there brothers and sisters,

i have the book Angels of wrath. and i want to know how the ritual of destroy with wrath will manifest?
i mean what exactly will happen to the target?

I believe that is different from target to target.

uhmm… well they need to go

Exactly I hate to see these strange questions on the forum

Things manifest differently for everyone in my experience.

It all depends on your work and what you desire from my understanding.

Do you referring to my question?

Things manifest differently for everyone in my experience.

Blessings, curses, prayers, invocation, evocations… Every single operation will be different and manifest differently. So it’s a really strange question because why would you expect any manifestation to be able to forecasted?

It’s like praying for guidance and then knowing what the guidance will be before it came. Doesn’t that seem strange?

it is NOT a strange question. because to whole book got specific rituals with specific outcomes. ritual of create insommia for example. is strait forward. but destroy with warth is not so clear to me. as far as i know i can ask questions on this forum without people judge me or attacking me left and right

thank you for your understanding. 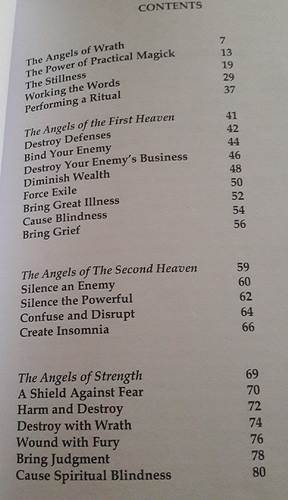 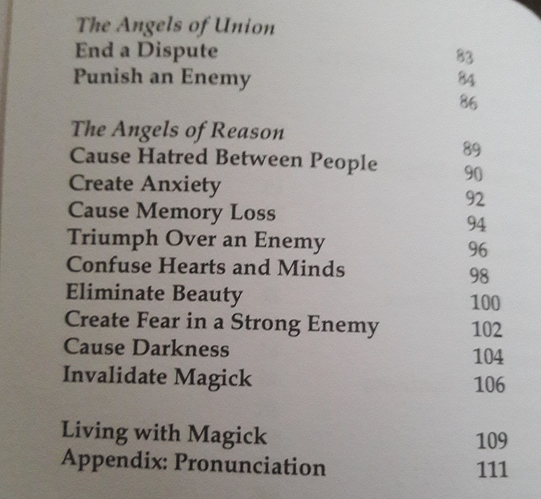 My apologies if you took my post as an attack. It just legitimately felt like a strange question. Most books have rituals and when they have vague descriptions, it’s because there is no specific manifestation. It’s related to the intent of the ritual.

Now that you have posted the context, I see why you asked such a question. I can see why you don’t feel like this particular rite is not straight forward. Have you gone to pg 74 and read it? If it still doesn’t make sense, then perhaps post a bit of that page that you are having an issue with and we can try to help.

Just from the table of contents, all that is clear is that the author has groupings of angels, and the ones of strength are the ones called for this particular ritual method. It could be they are angels of wrath based in strength. Or it could be that you are supposed to channel wrath into the ritual. I probably shouldn’t have tried to help without having the book for reference, lol.

thank you for your kind response,

here is a picture from page Destroy with wrath.
my definition of destroy is… brake something, if we talk about targets, destroying means send them where they belong… that is heaven or hell if you get what i’m trying to say here 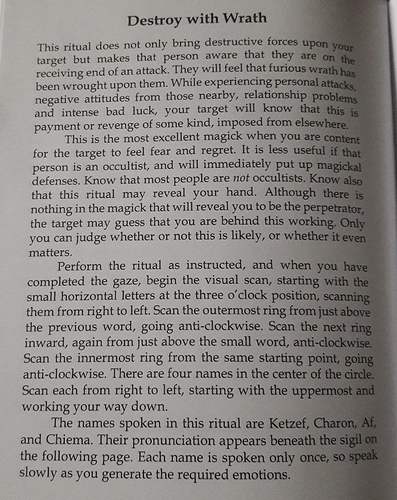 destroying means send them where they belong

Hmm. In a general sense, destruction usually just means a manifestation of a violent force. So in this case, the destruction is meant as their life is to be destroyed, turned upside down. Their life is the focus of this ritual. Thus you raise your emotions, wrath in this case, and call on whatever entities are in this ritual to take that emotional power and directly attack their life. This meaning relationships, finance, security. Every area of their life is being targeted here.

In terms of being sent to hell or heaven, that’s more a death curse, as those places are generally meant in relation to the afterlife. It’s the soul or spirit that goes to heaven or hell. And it would really only work when directed at someone who is not protected or magically aware or sensitive. Even in that case, a death curse needs to be really potent to have the desired effect.

yeah i got some people that are a threat to me. so if you got some legit curses. please send there details to me

Do all of them. =o) Maybe one will stick. hehe. Different flavors of fun. They can’t just go. They got to go with a bang!! Let them feel the wrath of angels.
If you read the descriptions of each spell. they seem fun for the target. Let them experience it all. gotta love gordon. his other books are great too if you haven’t gotten it. demons of magick and magickal attack.

It’s unclear of how it will happen as the angels use the context of the person’s life to get the results. It’s said in the magick books that if you are specific then it limits results more cuz we close up different paths if we want target to experience certain way. If it’s open ended angels/demons have more flexible to get the results. There are many routes to same destination.

wound with fury seems more fun than destroy with wrath as wrath spells says the person might know it’s coming from you and we sometimes don’t want them to know.

To make it work better. Do the destroy defenses magick first… happy casting.

your such great guy! love your input. yes if have DoM. i read the petition topic of @darkestknight he said that wise not to do multiple petitions. i guess that is for all types of magick. so i dont know if i can do all the rituals at once

one a day. =o) It’s like chips. you can’t eat just one. haha. Or 3 times a day. like meals. it’s become a normal habit. lol angel of wrath book spells don’t take that long. It’s one of the shortest spell but powerful. The key is emotional intelligence. meaning learning to create proper charge emotions for the spell. just follow the step by step instructions and your good to go. Might take some practice to get the process down. reread the instructions many times to get it right. It’s basically straight forward. ONe of the easiest process compared to other books. Petition isn’t that long on this book. It’s a sentence or two if you keep it general for flexibility possible results. The dom books is more of petition. scratch that. dom book isn’t petition heavy. IT’s the 72 angel of magick book by damon brand that is petition heavy for each power. There’s 6 steps of writing petition in that book for each spell you do for each power.

Do you know if i can layer them or will that counter act with the other rituals ?

i once just did back to back all of them . lol takes like a minute each. don’t know if it works for being so quick on each spell as i don’t have target in my life. no contact due to certain circumstance situation. Nothing wrong with layering as they are all different purpose with same goal to attack.

the conflict would be if you cast healing for them and attack them. lol might have different purpose of contradiction. haha.

If it don’t work. it don’t matter. Just cast it again another day. the more you practice the more your skill get better. practice is key in magick. we go through different states each day so some days we might be less magick skilled. lol

don’t get so hung up on results. that’s lusting. just do the practice. it takes time to learn. no one ride a bike professional level on first try.

@Quindecim
Well @anon37593562 gave some pretty good advice. I’d suggest taking it easy at first. Since you’re raising emotional energy for these types of spells, it wouldn’t be wise to go crazy with the amount. Plus doing too many may tell your subconscious that you aren’t sure the first will work.

Maybe focus on one ritual you like. Repeat it daily or regularly, knowing the spell is working and you are just adding to the working? The efficacy of a spell isn’t determined too much by the book you get it from as long as it’s rooted in something real and connections with real entities. It’s really up to your own skill and dedication.

Petition spells are good because they can rely more on the entities called. If you go that route, I would suggest trying to make a connection in dreams or otherwise with the entity in question first before casting it. Or even just a simple praise or prayer daily until you feel a connection has been made. I dunno. Just brainstorming.

Hello Hexa, you got great advice from other people but, regarding your initial question, it looks to me that in the description of this ritual Gordon said a few important things about how it works:

“Personal attacks, negative attitudes from those nearby, relationship problems and intense bad luck”.

This is what will happen to them^
And about the bad luck part, well, you got this answered by someone else already:

It’s unclear of how it will happen as the angels use the context of the person’s life to get the results.

When you do these rituals, when you command the angels what you want, do you keep to the title of the working, e.g “Destroy John Doe with wrath,” or do you make something else up keeping with spirit of the working. I did it the first way. Does anyone else do it differently.

I did a few of these back in March and this person is like the proverbial cockroach surviving the nuclear holocaust.

The target did lose his main source of income when Covid hit his country. He rented out the spare room in his apartment on Airbnb, but I don’t think can right now. He told me he was burning though his life savings.

He is one of these people who skates by in life, having great opportunities fall into his lap and treats people like shit. It’s like nothing negative ever happens to him. A couple of years ago, he received legal notice through his co-op for renting his spare room on Airbnb. He promised them up and down he would stop. The only thing he did was change platforms and went to Couch surfing. com, instead. His argument was he was getting donations and not charging people and he is still living in this co-op. He lacks empathy, never feels guilt and treats people like tools to be exploited.