Aliens Walking Among Us Dressed As Humans

Have any of you come across the other races here on Earth?

No. I’ve heard of angels disguised as humans and talking to people.

which angels? what kind of things do they say?

Humans can be quite negative, hostal and destructive themselves so what’s the difference?

Nope, but i have heard about that stuff though. And weird question but is Taylor Swift an alien? Her face looks kinda like an alien to me, plus she has blonde hair and blue eyes which apparently there are a race of aliens that have those types of appearances.

@anon48957109 i’m not sure what the difference is… i just know there is a game out there where people gang up on certain individuals to try and make them commit suicide… usually because they don’t subscribe to a certain agenda or way of life that interferes with the agenda… and seeing that we are HU-MAN then with the word HU translating to GOD representing the divine beings that we are, I find it hard to believe such a person would formulate such a game… after all there is also such a word as humankind although i’ve never come across the word alienkind lol anyway…

@SoRandom my friend has come up with a game where there is a method to get yourself into a certain state of awareness that allows you to spot the alien… if you or anyone else is interested then i will post the article here when it is officially published so you can choose to participate or not… it’s got nothing to do with hunting them or anything like that, just being aware that they exist and respecting that we are co-habiting this planet whether we like it or not

I wouldn’t use the word Game but you seriously think humans wouldnt do something like that for fun??
Humans do atrocities all the time. That’s no “proof” of aliens.

I don’t care if they are here or not but come on. It’s like I’m watching an episode of that Aliens series. 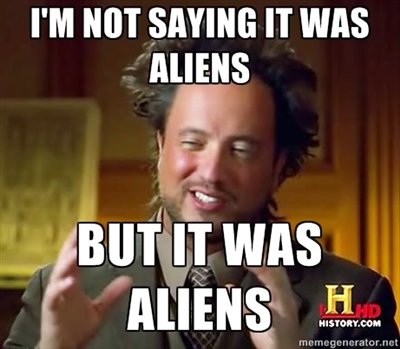 Practicing finding/seeing them is cool but again, the word Game.

@anon48957109 well i’ve seen a sneak preview of the blog post and it’s quiet interesting… it is titled “How To Recognize An Alien?” - i’ll recommend they put it in the lifestyle as opposed to game category of their website… you make a great point! - after all it’s just an awareness one may acquire

The only beings “alien” to this planet are humans. So if you want to “Search for Aliens”, you might want to start by looking in the mirror.

Gives you somethin’ to think about, hmm?

@faelix Depends,what do you mean by other races?
I came across beings that were …a little less human,I met a thing in a graveyard that was so connected to this plane it could inhabit a body but it had power of a god,also angels can come in human form,demons can come in form of dragons and if any of them want to be seen by everybody they will be seen even by people that don’t have good astral senses but that kind of manifestation is rare
Also,Djinn are connected to this realm probably more than they are connected to spirit worlds,they exist within this plane so they can make change faster than demons and they can do more on this plane than some other spirits

Please share this article with me. You can also do it privately, if you prefer.

and seeing that we are HU-MAN then with the word HU translating to GOD representing the divine beings that we are, I find it hard to believe such a person would formulate such a game…

I don’t think that all spirits in human bodies - or, to the point of this thread title, manifesting what appear visually as human bodies - are actually human in terms of generally accepted human values.

The Targeted Individual community. It’s often very smart people who were researchers or found out something they want kept quiet, and they want to ensure are discredited so no-one investigates why they died, while also stopping the research work they were doing.

Look into psychopaths - not everybody is born with compassion or empathy, and it can be really hard for normal people to understand those who can be so malignant, but they can.
Think: malignant enough that destroying someone because they enjoy the funny noises they make as they suffer, or just want to see them burn because they can.
An African shaman described it to T Sheridan as these being ‘demons’ (definition unclear but from Voudun probably) incarnate into human bodies, not actual humans. Victims of psychopaths describe them as ‘not being human’. Oter religions also have precedent of preists declaring some people to be ‘demons’, which I take ti mean ‘lesser entities’ not the celestials of he Goetia etc.


But I digress, while some aliens are also psychopaths, that’s a different subject.

My feeling with the ‘dressed’ as humans thing, is that the aliens that are able to visit us are in higher dimensional states - not very, 5th dimension, but high enough that they have the control of physical matter to create a 3D vessel like putting on a coat. I think the UFOs that flash in and out of visible existence are the same.
If you’re sensitive to energy, the signature would be unlike a human on the inside, but I’m pretty sure for most intents and purposes they’re making an effort to mask that and go undetected.

Doesn’t matter how many psychopaths and aliens there are when as a whole we are destroying the livability of this planet. Shit! I make it to 60 or 80 or 90+ that will be pure fucking luck at the rate this world is going. Some twat walks up to me with a freaky grin saying it’s an alien and I’m going to

They put a hand on me and they’re going to get a lesson on eating concrete.

Lol. A bunch of brainwashed stupid people running around.

“Opinions are like assholes.” -A quote from a youtuber lol.

But i don’t know about aliens being here on earth. Not sure if they exist or not to be honest. (It goes along with my view of waht the world really looks like).

Robert Dean, Ufo researcher who had cosmic clearance got access to very secret stuff. There was a report which concluded, I think, that at least 4 races walk at this very moment among us who look just like us and could sit to next to you and you would know it only if that alien wants to show it. One US army general resigned after the report because it caused gray hairs for the military. Imagine if one alien would sit with top generals in the same room and you would have no chance whatsoever knowing it.
I suggest to google Robert Bob Dean. Also George Knapp and Jim Marrs have interesting stuff to tell.

I’ve always sort of also seen the whole Alien scene as a form of Psychological Social Engineering (part of why I’m an athiest in regards to this). So my only question here is were such Aliens either illegal or legal? You don’t have to answer that but I’m sure you at least get my point.