A friendly message from my friend 'Ukobach!' 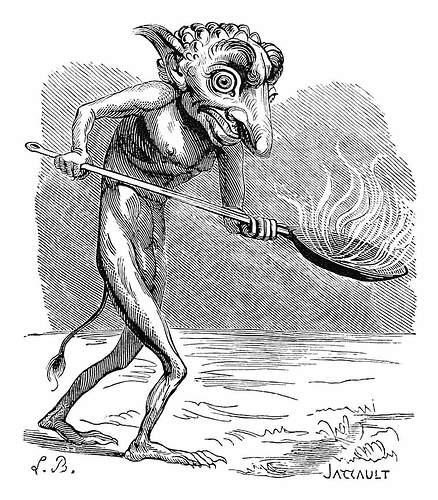 NO SHAME>
NO EGO<
NO PRIDE<
NO DIGNITY<
NO CARE<
NO HOPE<
NO GREED>
NO LUST<
NO POWER<
NO FIRE>
NO HELL<
NO HEAVEN>
NO GODS<
NO SPIRITS<
NO ORDERS<
NO WATER<
NO EARTH>
NO WIND<
NO DEATH<
NO LIFE>
NO CHAOS<
NO HARMONY>
NO EXISTENCE<
NO ABYSS>
NO VOID <
NO STARS>
NO UNIVERSE<
NO SOUND>
NO PAIN<
NO SUFFERING>
NO YOU>
… Now that’s true freedom.

All right. That it? I mean, not a lot of context there.

It’s simple, short, and straight to the point really.

Without context, it looks like any other channeled message that’s supposed to blow our minds and really doesn’t. There’s no context.

I could say that the frog sings more at night to illuminate our minds towards darkness and sound really deep. Not very helpful, since it’s simply because some vocal species are more active at night.

Maybe you’re looking too hard, when you don’t need too.

AH, the pretentious has found the door.

Is there a reason “<” and “>” face different directions for some of them?

To me this sounds like psychopathy. Psychopathy is true freedom… That could be true. Except biologically-made psychopaths don’t have enough concern to care about self-preservation or long-term achievements. Maybe we’re supposed to adopt psychopath attitudes for freedom, power and eliminating internal vulnerabilities. That’s how I’m reading this anyway. Thanks for sharing.

AH, the pretentious has found the door.

I have never heard of Ukobach so I did some googling. After scrolling past several anime fandom sites I found references to a low-ranking demon, or perhaps a race of low-ranking demons, who allegedly

invented fireworks and the art of frying food.

Ukobach appears with an inflamed body. Beelzebub assigns him to tend the oil in the cauldrons of Hell. He throws burning coals on the souls of the damned or tortures them with flames. In lore, Ukobach is the lamp oil for the jack-o’-lantern.

While the creation of fried foods is indeed admirable, and I (and many others no doubt) thank him/them for this, I’m not sure how it all relates to the message you channeled, especially as it sounds like he/they are essentially the scullery maids of the infernal realm, which I would personally consider to the the dead opposite of true freedom.

Out of curiosity, what sort of rituals do you use Ukobach for? Do you work in a fireworks factory or as a boilermaker? Do you have a close relationship with them? Or do you see them more as a patron/guide?

Another channeling that is really pointless, thanks OP, good for you.

Shocking, your missing out on true freedom

Or do you see them more as a patron/guide?

This would be a catchy metal song

I agree with @norse900, without context it really can be perceived as the ramblings of a madman. Did you ask something specific and get this channeled? Which of your senses are most developed? Did you use a specific divination method?

Haha, love your work. He’s very close with Beelzebub, but what we do in shadow is our secret.

“seek and you shall find.”

“Out of everything mentioned, what then lies ahead? Something beautiful to be created beyond human comprehension.”

“One must be mad, to enter thousand different worlds, wisdom with a price.”

“No Humans, No Masters, No Fathers, No Mothers, No Books, No Voice, No Sharing.”

Wow you guys are all roasting this poor dude. I’m sure what he’s channelled isn’t “worthless” and that Urobach as someone from the infernal realm could still have things worth saying.