Rtut, known as the guiding light, has guided me to work with the angels of the Zodiac. I was led to Haaiah, an Angel governing the degrees of the Aquarius constellation. Haaiah is the 18th spirit of Aquarius, and has the power to bestow “a sharp and penetrating mind.”

That night, I fell into a unique state. It felt deeper than the alpha state, and I felt myself “surfing” what would be sleep. I was almost asleep, but not quite sleeping.

I found myself back in this empyrean location. I realized it was the “home” or embodiment of the angel Haaiah. I realized I need to do angelic work, and it has been harmful that I have ignored this. I saw myself as a human with grey skin with black splotches. A denizen of this location called me a Satanail.

(Note: We are aware of the demonization of some demons. The stripping away of “good” qualities and only acknowledging the “bad” qualities of spirits. My question is, why the hell have some of us perpetuated this cycle? Some of us who traffic with Infernals, reject and demonize angels. To demonize angels is to miss the entire point of demonization; we should transcend demonization of any spirits - and approach them as equals.)

Anyways, I was observing the wall of Haaiah’s abode. Again I witnessed the blue hieroglyphics, this time they seemed animated. The writing seemed alive, as if it was waiting for me. I put my face to the wall, and I saw my 3rd eye chakra form a reddish gem. It was like somebody pushed a red gem into my forehead. I then received a download of information.

As the download continued, part of me wanted to get in my own way. Part of me wanted to question everything, and ask endless questions. Part of me wanted to stop, as it seemed very different from other magick I had performed. I sidestepped all this and danced. By this I mean, I decided to take this experience as a partner I am dancing with. I heard classical music, and felt the phrase “Wall of Remembrance” pushed into my awareness.

I saw the outline of two eyes, like this. 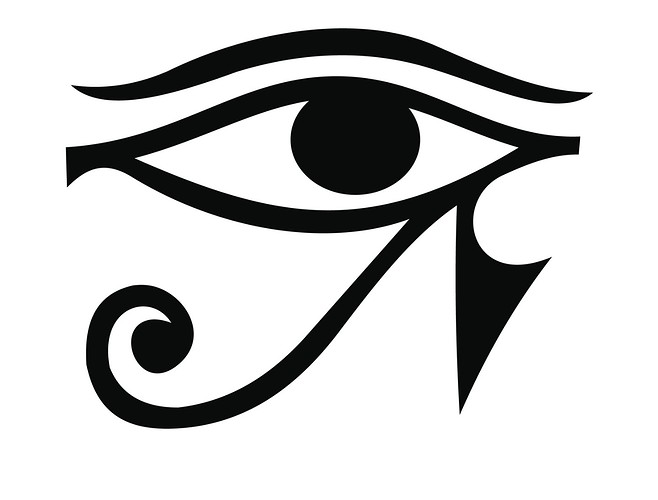 Both eyes were like streams of water, moving in a certain direction. A closer inspection revealed the motion was like a movie, except this movie was my life. Meaning if you watched the motion of the eyes, it would be your life or lived experience.

The right eye flowed only to the right, and it was told this is the “normal” experience of time. A forward perception of time: present, future.

As this occurred, I felt myself grow another head. Both of my heads sort of melted together, and this definitely has a Janus vibe to it. One of my heads was of a regular perception of time, and the other head experienced time in reverse. (The present which re-experiences the past).

I then had two experiences occur at once. The first experience was visiting a moment where sexual trauma was forced on me, as a child. I traveled to that memory, and it felt like time was paused. Each of my two heads faced somebody : myself as a child, and the predator. Honestly, some weird fucking communication occured and as of now, I cannot fully explain it. Even writing this feels crazy as fuck, but whatever.

The second experience was focusing on these two eyes, a dual perception of time (these are roughly equivalent to the two heads portion). I saw these two eyes transposed onto my ‘descended self’. That is my word for the self I saw during my work with Belial, and chthonic sorts of entities.

(Note: A user posted something about Loki saying time is a matter of perception. I am directly stating that that post was a seed that influenced what I have written.)

Now, I will likely update this. This is the strangest experience I have ever had. I cannot make heads or tails of it. If anybody has anything to say, please feel free to do so.

Magick, you strangest of friends.

7 Likes
{The Book of King Paimon} - An Ongoing Pathworking