Hi Guys. Can someone explain what these 2 pictures do when I carry it with me. Can someone enlighten me? Are there energies on it? I thank you for every answer. 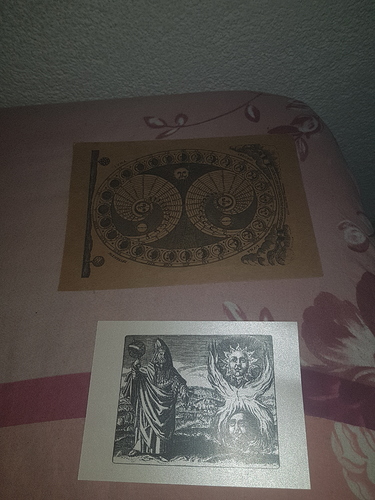 Welcome @MKF_DESTROY It is a rule of this forum for all new members to properly introduce themselves, so please click the link below and tell us about yourself and any experience you may have in magick, such as what you practice, how long you have practiced, areas of interest, etc:

the second one seems to be related with hermes trismegistus or the golden book of abraham the jew also known as Le Livre des figures hiéroglyphiques, that’s related with nicolas flamel, also i think is a hermetic alchemic image

does it have any effect if i carry it with me?

what i know is a image that have cipher knowledge for alchemy, so i think that the real meaning is more related with alchemy than other types of magick, but also can help u to pactrice some hermetic knowledge that may be useful for understand some kinds of magicks

Will the other people feel that what has changed in the aura with me through the pictures or will you feel nothing? Does it change anything about my charisma?

that image is more like a instruction or lesson ciphered on a image, so i pretty rare that image evoke a strong feeling, but there some paintings that can evoke strong feels, some like Ivan the Terrible and His Son Ivan on 16 November 1581 can evoke some strongs feels, this painting is a good example, cuz the painting was almost destroyed twice by people who felt overwhelm by this painting and they reacted violently to the point of destroyed the painting. but in the case of the second image, that image have some knowledge hidden, so would be pretty rare if could evoke a feeling

Looks like that free stuff that Frater Setnakh is sending with whatever you’ve ordered from his shop, tbh

Yes, that’s exactly how it is. But do these pictures change my charisma when I carry it with me?

Alright, @MKF_DESTROY Before you continue posting, please do as you were asked to do four hours ago when you first posted, and introduce yourself. It is a rule here, not optional, and should be done first. Failure to do so may result in your posts being removed or your ability to post suspended until our rule is respected.

@MKF_DESTROY as requested, please do an intro then I can remove posts about it and open this back up, cheers!