Hi anyone knw about the 10 weeks of cabala,? Apparently it’s is a high Magicka level,not well knw in west.any info thanks

Kabbalah or Cabbalah?
The K or C makes a disctiction.

10 weeks seems wierd.
Most kabbalist study/practices for their whole lives.

Tldr; Nothing about it makes sense and you have most likely been fooled by someone.

The tree of life does have 10 nodes, perhaps it means a week studying each one in turn. 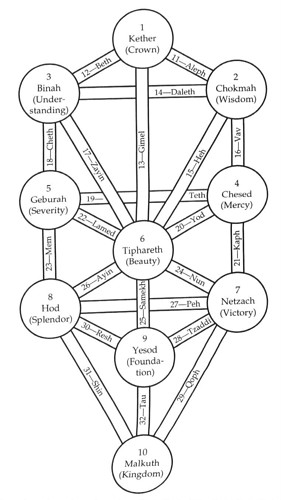 However that will not let you achive complete understanding of what each sephira truly means.
We also have the 4 worlds, the secondary sephiroth, Daath, the shattering of the wessels etc.

Kabbalah is more then just the picture of 10 spheres connected to each other.

Sure, but that’s not what he asked,is it?

zorrito has dyslexia and English isn’t his first language, but he’s actually a pretty good mage who’s been here a long time, give him some credit and try not to assume too much about him.

First of all I never pointed out his language. English is my own secondary language.

And kabbalah is much more then just the ten sephiroth.
Kabbalah is not just one thing but rather umbrella term for several diffrent traditions that work according to certain ideas.

Well u say its been hundre of years in the west,? Any proof. Besides Crowley,? Its a long class of kabalas and schools,. Nit about crowley or his student, tru its a few schools i woll never pin point a background since all difery in stile. 10 weels is one of then.i have read a few, but some are seals others theory. Im not versed in kabala. Others are words,. Just asking. All i knw read its European .

Any books u recommend, besides English,? Yes i can read a few language.

Rufus Opus has a book called 7 Spheres in 7 days I believe. I dont see this as unrealistic, although in my past there is a minimum of 8-12 months study of the Qabalah/Kabballah. Go for it!! Take detailed notes.

Well, if we are talking about strictly magic focused around Kabbalah (known as Practical Kabbalah) as opposed to mystic traditions that stem from it, we are talking about 600 years worth of history, although whether or not it was forbidden was highly debated in Jewish communities. Texts such as the Sefer Raziel HaMalakh came from these traditions, which would influence more well known grimoires such as the Sixth and Seventh Books of Moses and the Three Books of Occult Wisdom. That is where we start to blur the line between Practical Kabbalah (which is in a way a form of folk magic rooted deep in that system of Jewish Mysticism and revolves heavily around things like making amulets and commanding spirits) to Qabbalah (which takes the concepts of Practical Kabbalah and mixes it with Alchemy, Hermeticism, Christianity, etc).

As far as books to recommend, I would say the Sefer Yetzirah and Sefer HaBahir would be a bad place to start. They are texts that the ten sephirot, the four worlds, and the importance of the Hebrew alphabet/numerical system come into play. They are not really magic focused but they could help to have a background knowledge of Kabbalah for books that do stem from that belief system. Esoterica has a few videos on youtube related to one or both texts if I recall correctly

As for your initial question on the Ten Days of Kabbalah, who is the source? I think j have heard of it but it has been a long time.

There is a Greek or Hermetic Qabalah as well I believe.

Hermetic Qabbalah is pretty much what I described with Qabbalah and probably is the more correct terminology. It pretty is the backbone philosophy for orders like the Golden Dawn that drew inspiration from the jewish Kabbalah along with many other influences. I have not heard of Greek Qabbalah, but I could see it as Greeco-Roman mythology was one of the influences for Qabbalah.

Nick Farrell was at one point writing a book on Greek Qabalah, and I thought Rufus Opus had a similar one written. Could be wrong however.

I’ll take a look for them when I get the chance. At the moment I am still exploring Pre Kabbalah Jewish magic and mysticism so I can reflect on the change of thought as I progress into the more Kabbalah related systems.