Anyone who has worked with Amon, has the lightening in the room you’re working in continued to change from dark to light? Also, did your left hand and feel get really warm suddenly? Last night, I discovered a post that discussed partnering with the demon Amon to reconcile with an ex-lover. Upon reading the post, as well as the comments, there was a sense of “THAT IS THE ONE,” that screamed at me. In short, the instructions were to print a small photo of the ex-lover (or ex-(blank)), and write the sigil of Amon on the top of the photo. Once finished, blow on the photo to activate the sigil, and place your intention. Later, there was a comment that said that playing Amon meditation on YouTube helps with relaxing and focusing (relaxing is a challenge for me). There was a little knowledge of the evocation keys beforehand as well. When the ritual was starting, the small changes that were happening around me, made me wonder if it were the affects of Amon being in the room. I believe that he was due to this very reason. Has this happened to anyone else while summoning Amon?

I really like the sound of amon. But kind of worried about evoking a demon (raised Catholic). Is there a god/goddesses that works well for relationships?

Don’t know if you’ve searched around the site, because you would be surprised at how much people know + what could help. Amon is the only one that I’ve contacted + it was my first time (today). I am fairly new, so not a lot of experience. However, from what I’ve heard Sitri and Sallos are the two most popular demons that many talk about when it comes to the subject of reuniting with an ex or forming a relationship with someone.

I understand the fear. Would you prefer working with angels instead?

Amon is great, and inspires a very affectionate kind of love in my experience (albeit, my very limited experience). I did not get any signs at all when I worked with him, but the magick was very powerful. So if you’re looking for signs like this to show you that the magick worked, don’t, it’s much better to just trust the magick and move on with your life as if the magick never happened. But I do think this is a clear sign that you made contact at least, and Demons are known to do things like that, so I don’t think you need to worry. But if you experience a lot of strange activity that’s bordering on harmful, then you should do a banishing, but for now you can just leave it.

There are many. Lady Freya can help with love related matters, and if you have Norse or Germanic (Dutch, German, English etc.) ancestry, I would really recommend it. There is also Venus (Roman), and Aphrodite (Greek). The Olympic Spirit Hagith can also help with love, he is considered to be an Angel by many, but I think he is more like a planetary spirit or something similar. But the Olympic Spirits are very gentle for sure, and in my personal gnosis I have found them to once have been aspects of the Greek Gods, so perhaps Hagith was once an aspect of Aphrodite in ancient times.

Thank you so much for your help. That’s really nice of you. Thanks I’m so new to this

The commentor above spoke about the different Gods/Goddess you can contact, but as far as angels… I recommend Eshaliah, Loviah, Hakemiah, or Yezalel. All have some sort of power to connect lovers or bind people to each other.

The main reason for asking was because this was the first time I’ve done a ritual + and Amon was the one that I was drawn to. I did not know if I was reading too into things or if those were actual signs that he was present.

In that case, I think that is a very good indicator that he was present. But either way, he definitely heard your request.

About a few weeks ago I dreamt I was at my old house standing on the road next to it.

There was a bridge further down from the road and I saw a werewolf standing on it. Grey fur with a white fur underbelly.

I did get the feeling of anxiety and turned to run, but movement was sluggish. Like running knee high in mud.
As I realized this, I quickly turned my head around to look but the werewolf was gone.

I’ve been attempting to successfully AP recently also. In light of not being as successful as I wish to be. I looked into it and saw that Amon is one that teaches how to create a bridge between consciousness and subconsciousness.

Making AP easier to achieve. I have an app that I crossed referenced with and got this. 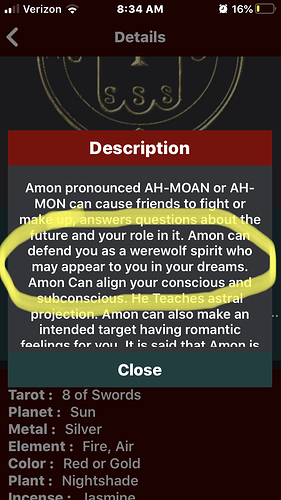 I used my tarot to ask about AP as well, I pulled the 8 of swords. Which is also aligned with Amon as well.

Very exciting connections that I’m hoping will bloom to a further connection with him.