Are they in any language?
How can words be used as a sort of stored charge, delay, relay, functional effect? Like functions in a programming library?
I’m only on abhor, but it is already hitting me rereading the dictionary that there are many words I don’t know, and these words could be useful in ritual as stored charges that self execute when spoken. Servitor type idea? Alchemy or transformation idea?

I would suggest looking into the relationship between mantra,mudra and mandala and/or yantra.
The alot of the golden dawn and similarly derived rituals utilize these just with different names and signs and patterns. The LBRP and Analysis of the keyword rituals are good examples of this if you use the “signs” for projecting, severing and the godforms assumed.

A mantra (Sanskrit: मन्त्र, translit. mantra, English pronunciation /ˈmæntrə, ˈmɑːn-, ˈmʌn-/) is a sacred utterance, a numinous sound, a syllable, word or phonemes, or group of words in Sanskrit believed by practitioners to have psychological and spiritual powers. Mantra meditation helps to induce an altered state of consciousness. A mantra may or may not have a syntactic structure or literal meaning. The earliest mantras were composed in Vedic Sanskrit by Hindus in India, and are at least 3000 ...

A mudra (/muˈdrɑː/ (listen); Sanskrit "seal", "mark", or "gesture"; Tibetan: ཕྱག་རྒྱ་, THL: chakgya) is a symbolic or ritual gesture in Hinduism and Buddhism. While some mudras involve the entire body, most are performed with the hands and fingers. A mudrā is a spiritual gesture and an energetic seal of authenticity employed in the iconography and spiritual practice of Indian religions. In hatha yoga, mudras are used in conjunction with pranayama (yogic breathing exercises), generally while in a... A mandala (emphasis on first syllable; Sanskrit मण्डल, maṇḍala – literally "circle") is a spiritual and ritual symbol in Hinduism and Buddhism, representing the universe. In common use, "mandala" has become a generic term for any diagram, chart or geometric pattern that represents the cosmos metaphysically or symbolically; a microcosm of the universe. The basic form of most mandalas is a square with four gates containing a circle with a center point. Each gate is in the general shape of a T. Man... 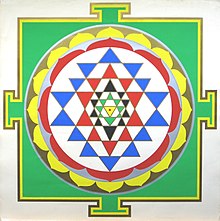 Yantra (यन्त्र) (Sanskrit) (literally "machine, contraption") is a mystical diagram, mainly from the Tantric traditions of the Indian religions. They are used for the worship of deities in temples or at home; as an aid in meditation; used for the benefits given by their supposed occult powers based on Hindu astrology and tantric texts. They are also used for adornment of temple floors, due mainly to their aesthetic and symmetric qualities. Specific yantras are traditionally associated with spe

I’ll look into it. I’ve never been big on Eastern Mysticism, but I’m open minded.

I can see though what you mean by mantra (words of power) and mudra (sympathetic functional effect). What do the mandala and yantra have as a relation?

The 2 can be seen as the symbols we use and the shapes and patterns energy takes on when these symbols are projected or charged.

Ah, thanks @Dinmiatus, I see now.

So … Posit … I wanna be Zeus
Cause … Some people are a holes and deserve a well placed lightning bolt.
Effect: Could be too little power, could be too much power.
Solution???

So basically what I’m talking about is that you’ve made significant contact with elementals, planetary spirits, and goddess archetypes that deal with lightning.
Electric dragons (blue dragons), Zeus and other gods and goddesses that deal in lightning storms or static electricity, down to elementals.
By a short invocation, loaded with their names Is a one stop ritual to wield lightning.
You say those words and that power is structured for you.

As far as lightning goes, clashes with charged ions, not unlike static electricity, right?
Now once a mage is wielding lightning bolts, what about manipulating the energy of it, splitting a bolt, redirecting it, pushing it through, pulling it back, ricocheting, etc.

If im hurling ze lightning my old method with the Lbrp and LIRap was to invoke fire,air and earth as air and earth play a part in the manifestion of lightning , as for the accumulation and discharge i see the force like a gathering stormbthen either visualise it striking the target “from the heavens” or hurl it at a sympathetic link.

Interesting resulting thought train for me.

Intent plays a large part when mixing elements as for example these 3 same elements forces can also mix to create a type of volcanic burst in ritual or a literal ritualistic volcano if bound to an object. The prosperity ritual i posted uses this method.

Are they in any language?

How can words be used as a sort of stored charge, delay, relay, functional effect? Like functions in a programming library?

I’m only on abhor, but it is already hitting me rereading the dictionary that there are many words I don’t know, and these words could be useful in ritual as stored charges that self execute when spoken. Servitor type idea? Alchemy or transformation idea?

As a Sorcerer, you quickly notice that some words, are affecting Energy.
For example there is words which draw darkness,
others draw light.
some heal, some destroy.
On a Metaphysical level, Letters and words are merely an illusion as language is a side product of continuesly being in exchange with forces that respond to those audible expressions.
Remember, creation tales refer to speech as being there way before anything else.
Being there as the only thing that existed together with the creator,
when there wasn’t anything else alongside.
Also, as i feel this expression to be wrong,
it actually showcases the inherent power of words.

with some demonic spells, the changes done to reality are so vast and clear, it becomes very hard to deny any of it.
And just think of the military order “shoot” - which is a very small word and yet ends lifes.

So - Words effectiveness is described there a bit.
Then, alongside, there are actual Rivers of Magick, streaming along our planet similar to water rivers, Voltage Wires, and clouds.

Many of the Powers i gained more rapidly then i even wanted, i gained by accessing such streams.
I even revealed to a Brother, how changing this magickal Structure would potentially change the complete Species and state of living which exists for all of us.
Which litterally made him able to harm Earth more then a nuclear War!
He’s proven respectful with the knowledge he gained,
yet he also drastically increased his magickal abilities by using those streams.

I intended to teach him more directly, well, we have our differences in viewpoints.

Also, notice that tons of programming is done through language to each and every living being all the time.
Only Magick and some advanced medicals seem to me capable of removing such programmings at all.

And Sorcerers do programm the enviorment around them, including living beings.

Since you resourch the area here’s a Mantra i’m unsure about:

I found it in trance, but i’m not sure about it’s effect yet.
Maybe it helps you in your studies.

In terms of Serviator Idea, i strongly recommend you to evoke Toth and ask him for a familiar to serve you.
He’s proven to work very well for me.
(indeed i underwent a full-time possession from him.)