Which chemicals enhance spiritual senses to work with spirits?

LSD; DMT ( N,N-Dimethyltryptamine ) - the latter is harder to find, very rare on earth

Can you share some magical experiences with NN-DMT that you had which had worldly consequences that you desired?

Only tried the first one, the second only heard of it. From personal conversation with people who had used it. Very brutal, hard to handle. I just mentioned it, I do not think it is meant to be used by non-magus level people. So… idk

I don’t have this much anymore, probably because I microdose tryptamines a lot and even when I do larger doses nothing’s a shock to my system.

Where I have had some really unusual things happen, synchronicities, energetic inhabitation, and have talked to people who had NDE-like experiences and caused spontaneous healing on other people who had no clue about occult anything, it’s dissos - particularly DXM. The obvious trouble with DXM is yeah, it’s legal (high school kids know it as ‘robo-tripping’), and you also have to be incredibly careful that you’re getting it by itself and at the very least nothing that will fry your liver and kill you. Technically your body can handle a certain amount of guaifenesin (2400mg per day if the FDA is anything to go by) but if you have the option to avoid that please do. As far as 3-x-PCP rc’s I have no clue but I would like to give a verdict one of these days soon and in particular find out with those, MXE, or any other dissos do the job better than DXM without so much body load as to practically immobilize you at higher plateaus.

The other thing with DXM - your mileage my vary but I found the ideal range is a very narrow band in 3rd plateau that’s very shamanic (for me it’s right about 720mg). Much less than that and I’ll get the stoning effects and being surprised by looking down at my legs and seeing them in perspective, too much more - even upper 700’s and I’m only there some of time, over 850mg and I might as well have just gone to sleep with a nicotine patch on, ie. it gets to be like a distinction without a difference - other than intense medicine head the next day.

With all of this though, the bad news (at least in my book) - most novelty comes from your early experiences and then these reduce over time. I think it tends to show that your mind, body, relationship to the universe, etc. are trying to ‘not’ open you to the spirit realm (quite likely because it’s really important - if your vehicle is for making more vehicles - that you don’t swim in extraneous data and get eaten by a lion, bitten by a snake, or mugged for your shoes and jewelry). In a way I also tend to think that reducing of experiences gotten that way sort of edifies Donald Hoffman’s take that what we see of reality is our brains filtering out the bear minimum for evolutionary survival and discarding things that don’t aid us in the rat race.

If you take big amounts it will have a significant change in your brain and your senses, no doubt, my senses trained forever after my most powerful trips

But take mushrooms consistently enough where you don’t build tolerance

I dont believe chemicals have anything to do with spirituality. They are mind altering drugs that cause the brain to imagine things that really are not there.

A strong indicator of this is anti-depressants. It is well known as people using anti-depressants will have the effects of LSD and other substances blocked or at least severly reduced. If spirituality was the case, this should not be happening.

Delta 8 THC… I use this all the time. I usually like to stay under control when doing energy work or any magic, but! Relaxation is important… So this is a chemical that is considered a cheat code imo, but Realistically.
I’m about the to break off of drugs completely, because I know that I can simulate whatever feeling I want whenever I’m in a relaxed state, it does help to memorize how the drug feels and create your own psychologically. cx

Everything you said, IN MODERATION. Substances can elevate you in certain contexts. I advise heavily against their dependence. Work alongside personal meditation. That is the most effective chemical. Within your mind.

Any potent indica marijuana is THE BEST. Watch out for entities that want to get into your apartment or house because it is typical with people who use weed.

I think that is what happened to me. I was an everyday smoker for years without problems until one night in april this year I felt a very demonic power descend up on me. I descended into what I think was a minor psychosis with extreme racing thoughts and weird mental energies… I couldn’t sleep until 8 in the morning. Since that day I don’t smoke any more because it brings me to that state. And since that day i’m suddenly suffering from lack of concentration, trouble reading and seeing/visual focus, weird thoughts, weird feeling/energy on the left side of my face, brain fog and suicidal thoughts. Even though I don’t smoke anymore. I suspected this could be parasites and now that you said this I suspect it even more. Does weed invite in parasites to your living space only or does it make them enter your brain? I feel very split inside my own mind.

I am going to try a significant trip of psilocybin then. I hope it doesn’t invite or strengthen parasites. I guess I’ll have to banish those first.

Lol what… no mushrooms can even reduce tumors and exercise ancestral spirits, like if anything it may even destroy or remove parasites not make them stronger, you can ask the mushroom to do things before you take it too

I only tried mushrooms once and microdose. Even with a microdose tough … I made a simple ritual that involved gazing in a sigil , the sigil started to glow then had electric arcs all around it and in general I felt a much bigger response from the spirit that I was working with… That’s how I felt how potent this may be for Magick.

This stuff is rather expensive… but I’ve seen DIY kits where you can grow your own, guess it will be way cheaper that way

One time I took shrooms and dude… I was literally speaking so loud in my mind, that people around me started saying the same things I was saying in my mind, & they didn’t even know why they were hearing this.

There was a time to where I felt like I was about to manifest a golden flower out of thin air. It was so beautiful… the imagination is definitely very real in that state of mind.

But also a dark experience followed shortly afterwards, which was what happened by the people around me hearing my thoughts, like I was speaking to them.

I remember it like it was yesterday… it has definitely set the bar in what I strive for.

Er no… extracted loads of DMT over the years. It’s pretty easy to do with the right equipment.

Well, as an empath I can tell you that the normal coffee I absorb, sometimes helps me to reach out a higher frequency.

At times, unfortunately, it leaves me into a sort of minor health issue. But coffee according to science, has over 250 elements in it, that they cannot identify. When they said that I was speechless because nowadays, I would have though that science would at least cover this sort of thing. Very weird this is.

Well I saw an experiment on spiders that were given substances, they made perfect webs on THC, LSD and mushrooms but when on caffeine the web was all over place 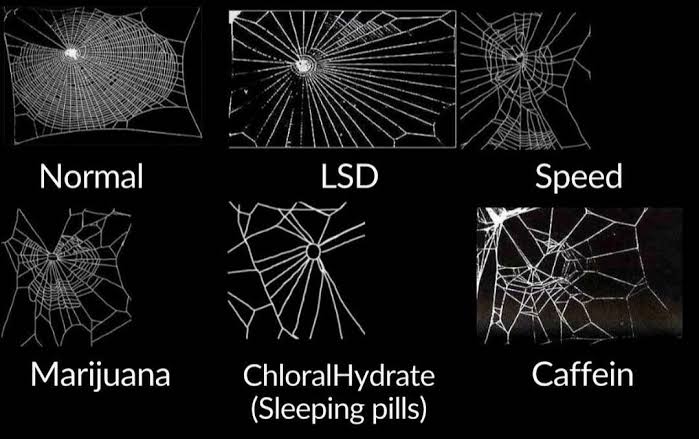 Based on my research things like psychedelic substances change the geometrical pattern of the body, brain etc. at an atomic and electromagnetic level, ritual magick, breathwork, meditation etc also has the ability create these effects, like I just summoned the mushroom spirit the other day to bring me some mushrooms and I instantly got high from the spirit

I do believe there is a perfect design to the geometry however which allows us to access our true psychic potential, and I’ve found this to be the goal in the great work and it is to become the 33rd degree principle of god consciousness or Christ