What is Death Energy?

Perhaps more importantly, is Death Energy / Death Essence a consequence of dying, or is it the cause? I’ve seen a number of people here say that if one internalizes Death Energy suddenly or without sufficient protection, it can lead to sickness and dying. So what exactly is it doing?

The analogous scientific concept to Death Energy, of course, is equivalent to the underlying cause of ageing - the degeneration and eventual death of all living things. Simplistically, this can be thought of as entropy - the tendency for things to become more disordered. For example, it’s easy to mix red water and blue water (ordered states) to become purple water (mixed/disordered state), but extremely difficult to go backwards from the disordered state back to order. Similarly, the universe favours the transition from living (ordered complex biochemical reactions) to dead (disordered simple decay). For sake of clarity, let’s refer to this idea as Entropic Death.

The alternative interpretation, though, is that living things are actually entropic devices that increase local entropy. This interpretation assets that the highly ordered, low entropy states required to sustain life are outweighed by the high entropy states generated by life due to intrinsic inefficiency. If you eat an apple, you don’t get 100% of the apple’s energy - you get maybe 20%, and the rest gets expended as heat and byproducts into the environment. So although eating the apple allows you to lower your own entropy and thus remain alive, you have destroyed the apple and thus increased your local environment’s entropy more than your own was decreased. Under this interpretation, the universe would favour life, and so ageing and degeneration would need to be evolutionarily programmed (this is called phenoptosis) for the good of the species as a whole rather than being an emergent property of life itself. Let’s call this Programmed Death.

Under the hypothesis of Entropic Death, we would define Death Energy as a passive, emergent property of life. To counteract it would require an active intervention that restores a low entropy state to the body, i.e. engaging cellular repair mechanisms like selective autophagy, proteasomal degradation, chaperone recruitment, and the DNA damage response. Whether this can be programmed by slight adjustments as typically achieved by pharmaceuticals and biologics, or whether this requires transduction or entirely new repair machineries, remains to be seen.

However, under the hypothesis of Programmed Death, we would define Death Energy as an active, phenoptotic mechanism that is not an intrinsic, emergent property of life. Consequently, counteracting Death Energy would be based on altering one’s programmed fate. Whether this is as simple as shots of a peptide hormone that decreases with age, or whether more complex genetic engineering is required, remains to be seen.

So, I’m interested to hear all of your opinions. Do you think Death Energy is an emergent or a programmed property of life? Which hypothesis is correct? And what would that mean for magick and esoteric attempts at life extension?

Also, if I’ve gotten a little bit too technical, I do apologize; let me know and I’m happy to explain what I mean in more detail for any segment of my post.

Hey its late might here and i should defenitly sleep, screw that lets read som new post and start write responses(;
For me first i must know what death represents. Death is the twin to life a power that is needed for balance to exists.
So what force then plats the role of ultimate destroyer of creation?
My money on that from must go to entropy based on my scientific view of the world.
In the chinese medicin view we all have a limited supply of life energi, the energy we get from food, water, air and do on helps determine our health and affects our life energy but it cant add to the energy so basicly we are all on a set time we can live.
In that view death energy could be seen as a force that uses up our life energy and does it mor efficent when we are reckless with our life and health.

Seeing as death is a counterpart then a simplyfication would be to see it as the parallel to anything representant life/matter/ creation and hence it would be something that we might not be able to see or measur, all we can percive is the shadows it leaves behind. So perhaps entropy then is nothing but the actual trace of the death energy.

Death and death energy is probably all around us all the time we are moving throug it and slowly our lifeenergy is consumed.

This rantings of mine gives no answer and perhaps makes things even wierder.

Perhaps death energy cant even be put in any of the categories.

@thestrangescientist
Why not just ask Death himself, or one his many faces? Also, have you decided to be more hands on with your practice, or still just pontificating?

I only ask because I really want you to find the real answers you seek. You’re not going to find them in debating and reading other people’s experiences. Get a practice together and get to it!

In my experience, people continuously mix up the energy of decay (often described as ‘sticky’) and the actual death energy, IMO. Decay is most equally deadly, more nasty somehow, but it isn’t FULLY dead yet.

I quess that is why there are ways around that if the caster is creative enough. I quess it´s a blessing to be naturally creative and a necromancer.

The whole entropy thing is clever but I think off point. The energy associated with death and cemeteries is just “different” than what is ordinarily experienced. How different? It depends on the people involved, the environment, and what you are looking for. Some spiritual forces seem to prefer it to hanging around with the living. As with anything different it should be approached respectfully.

Decay is real. Look around you.

Programmed Death, we would define Death Energy as an active, phenoptotic mechanism that is not an intrinsic, emergent property of life. Consequently, counteracting Death Energy would be based on altering one’s programmed fate

One of the biggest things I find my self testing is the sort of crossing over of magicks or rather the merging, seeing what I can do with unexpected blends of magicks and by far my favorite was the use of death and decay energy in healing magick. By treating it like an element I’ve had mild success in alleviating pain or suppressing mental calamities. Now I hear that it’s a harmful energy when mishandled and storing it improperly. For a while I was using my first shamans staff (it was retired at the time I had gotten a new one long be for this) which was a large branch of Willow that I had found on a backpacking trip it was mostly blackened and looked like lightning had hit it, so I kept it thanked the willows around and headed home, turns out years later after adding bone feather and beads to it, and after it’s retirement Willow and the additional canine jawbones and fox, coyote, and weasel vertabrae it held a large amount of death and decay energy which I would draw upon for later tests and experiments with those energies.

Thats fascinating. I know what I’m doing next time someone complains of a headache. Hears hoping I don’t cause an aneurysm

I feel there is a lot of similarity between death energy and void energy. To me death energy is like the void of life. While we give off + “positive” energy, those that have passed give - “negative” energy. It is the energy of the passage of the now to eternity. I feel this perspective works with both the presented hypothesis.

I am not sure what would work best for prolonging your life, but I feel a ritual where you all at once cast out that death energy in you while also casting death the entity out could work. Afterwards slowly but steadily draw the energy back in and know that you use death’s own power against him.

In high school (science class) we were taught that energy can never die. We see this all the time in inertia of moving objects. Magicians, especially those of us that are parasensitive and psychics, understand that people can leave behind their energy when they die, especially if that person had great energy at the moment of death (murder, suicide, anger, sorrow). When you see a psychic picking something up from a place that is haunted what they’re doing is feeling the death energies. Death energy is what allows spirits to still walk around after their physical death. As a necromancer this is the energy we work with.

As a necromancer this is the energy we work with.

How do you protect yourself from it?

I don’t protect myself from death energies. I consume them. I have an nganga and guardian spirits that linger over me should anything wish to cause me harm.

sigh talkative soul… these things are not to be spoken of. if you are who i think you are then you’ll either “wake” or shut the fuck up. 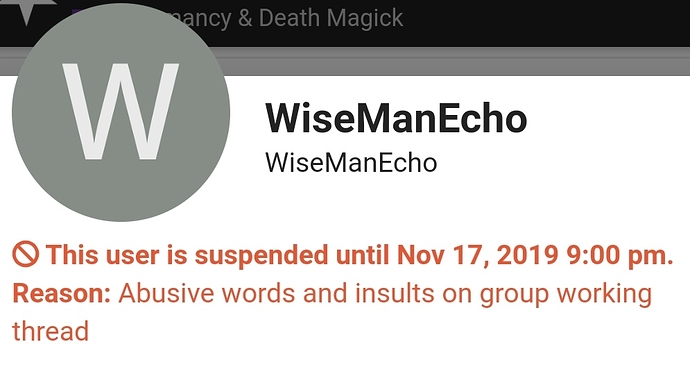