What do piles of seafood on the street mean?

Hi, I apologize if I am not in the right place to be asking for help on this topic. I will appreciate any ideas or comments on where to go or what to do regarding the following situations. Thank you.
I was walking to work early in morning maybe between midnight and 3am and I found a pile of dead crabs (all carefully placed with their bellies up) in the middle of the sidewalk. I looked around no car no one was around, I did not stop and walked around it. I found it weird it was placed so neatly (not thrown/scattered like throwing trash/leftovers; I do not have a photo of this). 2 days later in the parking lot of the place where I work my boss found 2 piles of seafood (or something similar I really don’t know how to describe it I have never seen it before; you can even see some beach sand) (see photo). Someone took the time to place it, this was not thrown carelessly. Not saying these are related but a weird coincidence I thought. These 2 places are at least 1.5 miles apart. My boss poured bleach on them and the piles started smoking for a couple of minutes. He ended up shoveling it all into a bag inside a box and throwing it into the garbage. These happened 3 months ago. Last night in the same parking lot but different location 2 piles of dirt appeared. (see photo) I found it strange that both seem to look the same, both had small pieces/parts of plants/roots and 2 sticks on/near them. My boss saw them and he only said that he would be afraid to try to pick them up and find something inside. I laughed because I have never heard him talk about that subject, I thought he was joking, he said leave it and so I did. A few homeless people walk by/sleep near/in our parking lot but never had any problems. Area remains well lit at night and no car could come in after the gate has been closed.
I experienced sleep paralysis often when younger but not anymore, not that its related to these piles but I do not know anything about incantations, praying to Death, witchcraft nor black magic (or related topics), what I mean to say is that I never experienced/have come close to strange situations like these nor I have heard of.
What can these situations mean?
Could these situations be related?
Is it something against the property or a person?
What can be suggested to do to repel/fight against it?
should we be scared or feel threatened?
If someone does not believe in these topics could still be harmed/haunted?
Which questions should we be asking to resolve this?
Should we leave it alone?

I could answer questions if anyone has any. Thank you. 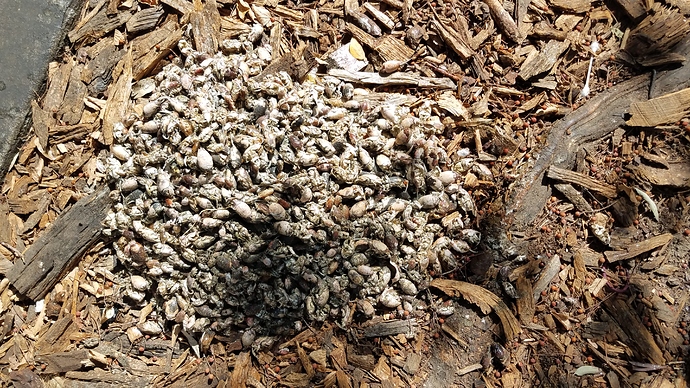 I haven’t got a exact answer so i make a hunch, i could have been a sign from Calypso, something like out of Pirates of the Carabien worlds end where Calypso turns into a pile of crabs, im only guessing.