What Day of the week is Uranus associated with?

Does Uranus have a day of the week it is associated with?

None. The planetary magicks are of the 7… Uranus and Pluto are not very involved because they are so far away and circle the earth at such a slow pace they do not have serious affect on us

For some reason I wanna say you could work with Pluto on the same day as Mars.
I’ve read somewhere before about working with the other planets and which of the seven they most associate with. But I could be wrong. It’s really a lesser known thing.

No you can, for sure. But he asked if there was a day and hour.

Well, day, you see where I am going w this lol

I really wanna say for Pluto you can use the day and or hour of Mars. And then Neptune and Uranus I think one is Jupiter and one is maybe Saturn?

Ugh this is making my brain hurt haha!! I would have to try and find where I read about it…

Yes you can use them. Im not sure of the exact associations, from what I have read is there effects are not as strong as the other planets and what you can do with them, we can already use with the 7.

It isnt so much that the effects are not as strong, they focus on some different areas though. For example pluto plays a part in most magic involved with the transformation of one energy into another. If you wanted to take a negitive energy you are surrounded with for example hate and use it as fuel for money magic without the negitive manifestations pluto would be a key component to that working.

A more recent example of this would be with all the hate that was directed at trump during the election. More that got thrown at him the more momentum he got. Hate transformed into fuel, this kind of working is where the idea of “love you haters” comes from cause you can Use that hate as fuel once it has been transformed.

I have some notes I can dig up later (too tired too hunt um down now) about the uses for the outer planets. I could likely benifit from putting more time into Neptune and Uranus personally, i just happen to get more active use out of Pluto.

Do you have a credible site for this? I would like to incorporate them into my magick but i dont know the corresponding days or hours

Alot of it is from digging i did when i was wondering about the practical uses for those planets. When you start to dig some contradicting info will pop up but alot of similar ones as well.

Unfortunately the harddrive that had my bookmarks on from that info hunt fried last year. The planetary magic course from mind and magic had some info on these planets as well that lines up with what i had found. So that is what i use them for In my experiments. As i have said personally i used plutos power of transformation more than the energies other 2 outer planets but i’m likely gonna work on shifting that a bit.

I was looking for that exact thing for my shields! I’m going to use if asap.

I havent been concerned with the days and hours lately, gotten pretty good results without them in my recent works. Trying to see how far i can push my magic past that imposed limit. Especially wheni started finding a few works from practitioners who views on how it worked was flipped from the ones most find on the days and hours regarding which is the power and which is the lens of manifestation.

But as i said when i have a chance i see if i can dig up the day and hours.

Uranus is a weird planet, very unpredictable energy but it is associated with ‘‘divine spark of inspiration’’ or something like that i learned somewhere. I would say the planet Jupiter is a bit like Uranus as it deals with some similar things, and it has some things in common with Pluto as well. It all depends on what you plan to use Uranus for, I would associate another planet`s day accordingly. Uranus rules electricity, revolution, innovation, rapid and unpredictable change, technology, astrology, the sky and other dimensions, i could go on lol hopefully this helps.

It is kind of the "mad scientist of the planets
Some sources i found say it can be worked with on monday other saturday as i havent been focusing on what days i work with each planet i havent dug that deeply into it. Hope this helps.

@Dinmiatus So I told you I was going to use Pluto for my shields, well I looked up the sigil and it is the exact shape of the mechanism I built for my shields a few months ago!

I wanted something to transform people’s negative energy or thoughts into positive energy for me. I mentally built this cup/chalice sort of thing that rocks back and forth like a upside-down pendulum, ticking back and forth, picking up negativity, and dumping positivity on me. 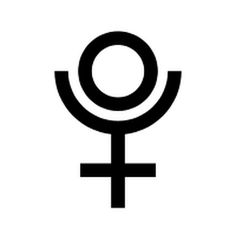 As i said the other day haters = FUELLLLLL

Transformation magic so handy. So useful.

Need a power up? Transmute the hate to fuel. Cause haters gonna hate

That idea was in my notes for so long. I knew it was possible I just hadn’t read about anyone doing it before. I am going to keep charging with Pluto and ascend into space lol

Oh alot of people do it unconsciously some activly.

Look into the book " the 50th law of power" it gives examples of this with the rapper 50cent and other historical figures.

Offhand I would say Monday, though Thursday and Saturday are possible.
Monday is generally the lunar day. There are two nodes, north node (true) and south node. By extension, Uranus, Cauda Draconis should be the North Node, Neptune, Caput Draconis should be the south node.
It is six houses difference between the nodes on the natal or horary chart.
It is not that these nodes are the planets, but that they have a similar effect. North would have the waxing symbol drawn, south the waning symbol drawn in the Luna hexagram.
Thursday came to mind as it is the day of Jupiter, who like Neptune rules Pisces
Saturday came to mind as Aquarius is ruled by Saturn, though Uranus is the new ruler.
Pluto, associated with Scorpio should be Tuesday as Mars was the original ruler. Jmo.