What are Jinn? Is this simply an Arabic word for spiri? Or a different class

I did an evocation of Al-Jund’ from S Ben Qayin’s “Book of Smokeless Fire” putting a death curse on someone who’s time has come to die.

It was an interesting ritual and quite different from other evocations I’ve done of Angels or Demons. I’ll keep you up to date of what transpires…

I want to know as much about Jinn as anyone is able to share with me.

An author known as Nineveh Shadrach has published several books on the Djinn. One title “The Book of Deadly Names” is available to read at google books. Others (ebooks & hard copies) are available through Ishtar Publishing.

As far as the Infernal spirits of the 72 go they all serve all races under 3 religions. The difference is in each of the 3 religions they have a different way of contacting them and they call them different names as well as have different elemental associations. If you use Islamic methods or symbolism, then you will call upon Islamic Associations of demons…likewise if you utilize American versions you will call upon the Western aspect of consciousness of said demon.

Whether you believe its an Egregore or a real living Being, the demons tie into all the races of the 3 religions.

So as an update to my Feb 16 post, (I should have responded earlier it seems) I did the ritual and 2 nights later Al-Jund came to me and said she tried getting the guy I cursed into a bad car accident, but he narrowly escaped. She shrugged and said she tried and the departed. It would seem their freewill limits any feelings of being responsible for further action.

Heres a Link to book to get you started!! 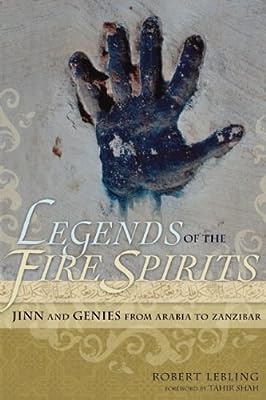 When Westerners think of a genie, the first image that comes to mind may be Barbara Eden in her pink harem pants or the illuminated blue buffoon from the animated Disney film Aladdin. But to the peopl ...

For an excellent introduction to jinn, I recommend the book, Jinn Magick by Baal Kadmon.

I’ve since had my question answered by a spirit directly.

The spirits will refer to themselves as 'demons, jinn, angels" etc. depending on what word you yourself use for them.

Jinn is the word I use to refer to certain types of spirits… And thus, they call themselves ‘Jinn’ by virtue of that.

I haven’t found this to be the case.

I am not sure what exactly are these Jinn

Jinn is just another word for ‘spirit’[quote=“fke, post:7, topic:5238”]
And Qur’an seems to be some sort of book of magical formulas since all the surat and ayat can be rearranged and recited in different orders to achieve certain magickal effect
[/quote]

This is something that actually really interests me…

I want to learn more about these things. I have no aversion to the Islamic religion.

Writer Baal Kadmon seems to think that the jinn are a bit more pranksterish than …well than other spirits;

however I’d like to give a warning. Jinn, like other spiritual entities need to be communicated with care. They can grant you what you want, but be careful what you ask for. Jinn are notorious pranksters, you might get what you want, but in a way you really would rather not have it…You have been warned. With that said, let us go deeper into the world of the Jinn.

True, sometimes spirits would call themselves whatever is more convinient for you even if it doesn’t necessarily correspond with their “true” nature.

Speaking of working with Qur’an, I meant it in the sense that most of available rituals originate from Islam one way or another and rely on using quranic verses etc. If you want something more or less old that is.

I’ve sort of given up on researching this topic since there’s very little of information available in English and now I sometimes incorporate quranic verses and the 99 names in planetary magic rituals and stuff like that.

P.S. Since I wrote my initial response, I came to conclusion that there’s some sort of genetic or other kind of deep connection between certain people and certain religious systems. It sounds obvious now when I think of that, but you will have the best results and you’ll be able to do the most powerful magic within the system your are most connected with (and using the language of the system). For me using Hebrew/Arabic and Judaic/Islamic texts seems to work the best while working within say Hindu system seems to produce just okay results.

Now, I understand that we are all about transcending any religion and any diety and stuff, and I’m all for it, but I think it’s stupid to turn down a really powerful tool just because sometimes, maybe you could potentially become a god (which, let’s face it, not many people even came close to). This last part is not directed to you personally obviously.

Jinn are a different class of spirits. They are not demons

I’ve enjoyed working with the jinn briefly in the past. People tend to figure out how to block them though.

they apparently have religion. They could be Muslim, Christian, etc

This is true. They do have religions; they live in tribes. Jinns that are “Pagans”/Disbelivers, they are the most dangerous Jinns.
They can have relationships with humans, but once human marries a Jinn, human dies/becomes apart of the realm of Jinns.

Iblis could either be another word for Lucifer, or the name of the chief Jinn.

Beware, Jinns don’t care much about fulfilling tasks as much as Demons do.
Though if you start “bothering” her about the task, she’ll either graze you; damage your vital organs or simply take your soul.
They’re mortal with the ability to take souls of other beings.

I don’t know much about them, but I know some people believe they’re fire elementals.
Hence, ‘of smoke’, ‘path of smoke’

This may be the reason why some myths place King Paimon as a King Of Djinn, and some other opinions an elemental spirit.

According to VK, and others, Azazel and King Paimon are the same. However, they do not exist in a simultaneous identity (ie, if you evoke Azazel, it’s not KP).

Djinn are traditionally regarded as wind and fire spirits.

Coming from an Arabic, Middle Eastern, country, I can write you down pages and pages about Jinn, and stories that many told over generations.
Yes, they have religions and live in tribes. They also worship God (at least some of them does).
They were made invisible to us as we cannot see them with our own eyes years ago. Before that they used to live in a parallel world to ours, without even a veil, as they promised not to interfere with Humans. That until Jinniyat (or daughters of Jinn) started to fall in love with Human males. Which they took as wives and ended up cursed that the veil was raised.

My grandmother once told me about a Priest that was abducted by the Jinn, and was asked to marry them in the forest of the village. He asked to take his ceremonial clothes, which he burnt with a cigarette in order to make sure he’s not dreaming.
He wakes up the next day and opens the closet. Which he found his clothes burnt at the same place he did. (excuse my English, I’m translating the story from Arabic - my mother tongue)

Several similar stories about abductions or Jinn taking humans in the night are always told by old-town folks. They also say if you made a pact correctly, they will grant you any wish you want. They can choose to work with you and call upon you even before you were born.
They act like you shadow, and can either be loving or unleash hell on you.

Any Sheikh or leader in a Muslim community or organization tend to keep a Jinn that helps him in his deeds and bindings, exorcisms, rituals…etc.
They also use them to either cause or break a curse, remove an evil eye effect, help a girl get married or cause her to be unlucky in Love.
There most effect as I’ve noticed was in the matters of Love, Luck in Love and marriage, and Money. They cannot help in healing nor serve properly in such contexts.
They’re mostly Arab Spirits Who Can Eat, Sleep, Have Sex, and communicate.
They are mortal and can reciprocate.

According to El-Zein, pagan Arabs (big believers in the occult) worshipped jinn long before Islam was introduced in the seventh century, believing that the spirits were masters of certain crafts and elements of nature who had the power to turn plots of land fertile. Jinn are believed to both interact with humans in our reality and lead their own lives in a separate realm. “As spiritual entities, the jinn are considered dual dimensional, with the ability to live and operate in both manifest and invisible domains,” El-Zein writes.

Hope this can help somehow.

The father of all Jinn created from the fires of samum, sometimes identified with Azazel.

In Islam, there are no ghosts/poltergeists, there are Jinns (they are mostly neutral, quick to fall in love with a human and thus posses her/him, they can be Christian/Catholic/Muslim). They’re born same as us. And they’re Mortal.
Bad Jinns are called Shaitan. They deny existence of God and hate humans.
They live in tribes and are territorial, primitive humanoid beings.
To a human they appear in form of a snake and in form of a dog. But the only difference you’ll notice is that in whichever form they appear, they’ll have glowing red eyes.

I forgot to mention that Jinns are beings of Smokeless Fire.

I work with the jinn Lalla Malika