Ok, so I’ve got a bit of experience in writing petitions, sigils etc but last night was a bit of an interesting one and thought I’d seek out some different views on the possible meaning.

So I began yesterday by writing a letter to Asmodeus, introducing myself and a requesting for a task I’d like fulfilled (break-up), when I required it etc. I wrote that the letter was too be my initial offering and should it be successful, I’d like to continue working with him in that format and making other offerings down the line. I chose this method as I’m not yet ready for Evocation.

Now normally, I burn my petitions when I’m in the bath or shower & use the exhaust fan, windows etc to rid any smoke smell - which has never been an issue, until now. Last night was no different to my normal routine, I had written my petition earlier in the day, meditated on it through the afternoon and once I’d finished work headed home to get it happening.

Headed into the ensuite, lit a white tealight candle, popped on some audio of Asmodeus Enn going in the background, read my letter aloud and folded it up into a cigarette shape for an easier burn.
I used normal A4 printer paper, nothing fancy (same as I’ve always done) and had the sigil drawn on the back of my letter/petition. Went to set it alight on the candle, and no matter what I did the flames would not take hold properly. They’d burn for a few seconds, then end up as glowing embers on the paper. After multiple attempts, different parts of the paper, I ended up sitting it into a glass dish on the floor as I hopped in the shower.
The letter continued to smoulder and smoke, and although I had a window open, fan going at this point and it just would not dissipate.
In the end it took about 10 minutes to burn down to ashes but never had a proper flame the whole time. And of course, managed to get the smell through the entire house

It wasn’t a normal smoke/burnt paper smell either, it was smoky, but almost sweet which I also found unusual.

I did a quick check with the pendulum that I had been successful and it seemed to show that I had been, but I’m interested in hearing others thoughts on why this happened / what occurred

This happened to me as well
The paper just wouldn’t burn and the smoke filled the room, but the petition was successful even if I had some technical difficulties

It happens sometimes, I don’t think it has a hidden meaning

@bizzare What do you mean by technical difficulties?

I’ve already had some movement on the subject, so I’m pleased! See what today brings

bizzare What do you mean by technical difficulties?

The petition refused to burn properly

My results came through tho

Could be something.
Could be nothing.
What does your heart say it is?

Asmodeus never helps for free, only if he knows you very well. You need to give him your blood (like most of the demons actually) otherwise, nop. If your petition will be a success, you most likely used the law of attraction, intent and visualization, not Asmodai’s help.

I agree with @Keteriya
Usually your intuition is correct.

I personally think that there isn’t a special reason for the paper not burning properly. Some batches of printer paper won’t burn with a proper flame probably due to the type of wood or tree used in its manufacture. I often have the same issue.

Well its been a little over 36 hours since I burnt the petition, and half of it has already been successful. Be it help from Asmodeus, the Universe or fate, I’m reading it as a positive outcome for this stage of things.

Its good to know that the paper burn issues have been experienced by others - Directly related to the outcome or not, it was interesting all the same.

Eh I wouldn’t say blood is necessary for most demons in my experience. I’d personally say take a closer look at that, if your all good giving blood for everything guess that’s fine, but I’ve not found it as a needed element for any working I’ve done.

If you trully work with high ranked demons, they require your blood and I quote Asmodai: “to bypass the control of the archons… he cannot intervene in one’s life only after he gave some blood… until then, it’s free will so he cannot directly intervene”

So my situation is that I have asked him to “intervene” in someone else’s life, not my own.
By your argument I would need to supply him the blood of the person/persons I’m asking him to intervene with?

If he asks for my blood for this or any other task, I will happily offer it. Until that time it seems that what I’m doing, and have done, is working

Normally when there is left over non burned parts I see it as a message from that being or a sign. So I definitely say yup to the sign 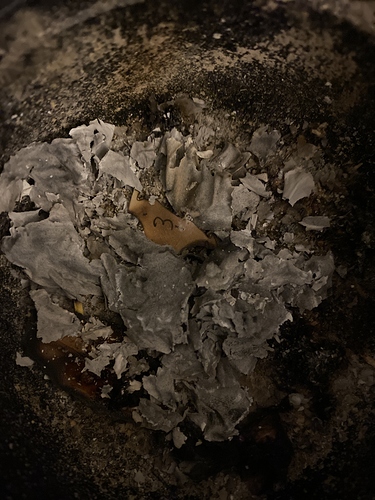