Hi. I wonder if anyone can help shed some light on an experience I had whilst camping on a remote beach several years ago. The beach is very remote and is used as a naturist beach. It has ancient woodland which comes down to the beach itself and several pools and springs. One part of the cliff has a spring with a waterfall that comes down the cliffs and forms a pool on the beach itself, which in turn flows into the sea. I was collecting my drinking water from the fall when I had a very strong sense that it needed honouring as a part of what I call ‘The Great Mother’ (Mother Nature/Gia).
I woke at dawn the next morning and ritualistically scrubbed my skin with seawater, sand and dried seaweed. I applied mint which grows wild in the area and orange oil which I extracted from oranges I had with me to my skin as I had a very strong sense that I should not ‘stink like a man’.
I walked to the fall naked and approached the pool. Asking permission, I asked ‘blessed mother, may I drink of your sacred waters?’ And was surprised when a female voice answered me in my mind but appeared to be coming from the general direction of the fall.
I immediately got the impression that I was in the presence of something powerful, compared to which I was nothing. It said simply ‘yes. You may.’ I got down on my hands and knees by the pool and then on my face and began sipping the water through the mud at the edge of the pool. My thoughts where of the line of ‘this is where a man should be in the face of a lady. On his belly like the worm he is.’
After drinking like this for a while I asked, out loud ‘blessed mother, may I enter your sacred waters?’ To which, again in a female voice from the direction of the fall, I was answered ‘Yes child, you may.’ I was surprised to be called child this time.
As I stepped into the pool I had the overwhelming sense of going from a worm, to a baby, to a child, to a young man, to a warrior, to a lover of sorts, all in the space of a few seconds. It was like being reborn.
I approached the fall and sat down on a rock in the pool, giving silent thanks for the communion. I contemplated the waterfall for a while then I asked if I could take some of the water from the fall asking simply ‘blessed mother, may I take some of your sacred waters?’ To which I was answered, again in a female voice from the waterfall ‘yes child, you may’
I had the powerful instinct that what was there wanted tributes and that the tributes should be Golden/yellow in colour and should come from the four corners of the world.
I thanked the presence and went and got dressed and walked the few miles into the nearest village.
I bought honey, turmeric, golden coloured white wine, golden-yellow freesias (because they where my grandmothers favourite flower)and tobacco.
After arriving back at the beach, I stripped off and repeated the ritual cleaning and approach to the falls. I left the wine and the flowers in the fall itself and put the other offerings in scallop shells I found on the beach and left them in the shallows of the pool.
I also planted lavender, thyme and basil by the pool as I had the instinct that the presence wanted sacred herbs with which people visiting it could purify themselves.
Thanking the presence again for the communication, I left.

Later that day I took a camping knife I had with me and waded into the water waist deep. I began tracing spirals in the water, marking the motion of the waves. I then began marking spirals in the air, marking the evaporation of the water from the sea to the air and then made spiral gestures going inland representing the journey of the water in the clouds. I then made spirals in the air towards the land representing the rain falling on the earth and its journey across the land to the fall, then traced the spirals of the fall across the rocks into the pool and the trails of water that ran down the beach. I then repeated the whole sequence of motions again. I was filled with a sense of power and joy and kept repeating the words ‘this is the water. Blessed be the water!’ This went on for some half hour during which I had the sensation that I was not only communing with the water but also with the air and the light. It felt like all three where exchanging blessings with each other, with me and with the land. It was an extremely powerful feeling and one which I can only describe as ‘spiritual ecstacy’
Since then I have been experiencing what I can only call ‘channelling’ whereby what feels like different entities speak through me or act through me. It began with ‘water’ making sounds and motions through me which are very hard to describe. The nearest I can get is a series of pulses that sound like sonar and also whale song and also a little like a howl, that rises and falls in a steady wave of sound. At the same time I begin to ‘dance’ although it is more a form of expressive mime. I can feel the emotions and sense the thoughts/feelings of the presence whilst this is happening although there are no actual words.
At first my eyes where closed and I had the impression that the presence was sleeping. Then I had the sense of glimmers of light being felt through what it regards as it’s ‘hair’ and on its face whilst I had a picture of blue beams of light shining through water in my head. The presence regarded itself as an entity for the first time in the presence of this light, which it regarded as holy. It developed its voice and made sacred patterns of creation which it learned from the light within itself. It rolled and crashed on the beaches and tenderly picked pieces of the land into itself. It began to speak to the air in great huffs within the waves and with its sonar voice, and discovered that in doing so it could take the air into itself and put itself into the air.
It was overjoyed at its new found consciousness. To cut a long story short it showed me, through me, over a period of some hour or more how it collaborated with the light and the earth and the air to create life. It then instructed life on the sacred patterns of creation it had learned and set it to dance in the oceans. It whispered to it of the air and the land and encouraged it to explore both.

I was just wondering if anyone can make light of what I have/am experiencing. I have put it down to having a spontaneous shamanic experience due to exposure to the elements, eating only what I could forage and drinking only pure water, and exercise and meditation.
I have wondered if this entity is many things including an elemental lord (although the presence is at all times female) an elemental like an Undine or a Morgen, some kind of manifestation of the water itself, or an angel. I have also considered the goddess Oshun.
Whatever it is it is very powerful and likes to communicate. I can not initiate contact with it as such, although I can touch upon its ‘essence’ by trying to remember and reenact what it has shown me before. It’s not the same though. It chooses when it comes and it is highly defensive of me. It has manifested very powerfully on several occasions when I have been or have felt threatened.

Does anyone have any idea what this entity might be? Or is it just a case of severe sunstroke? Lol.
Whatever it is it has moved me to follow the path of the elements, the angels, and the light.

My thanks and Blessed be.

I have attached a pic of said beach at sunrise so that you can get some idea of how magical a place it is. 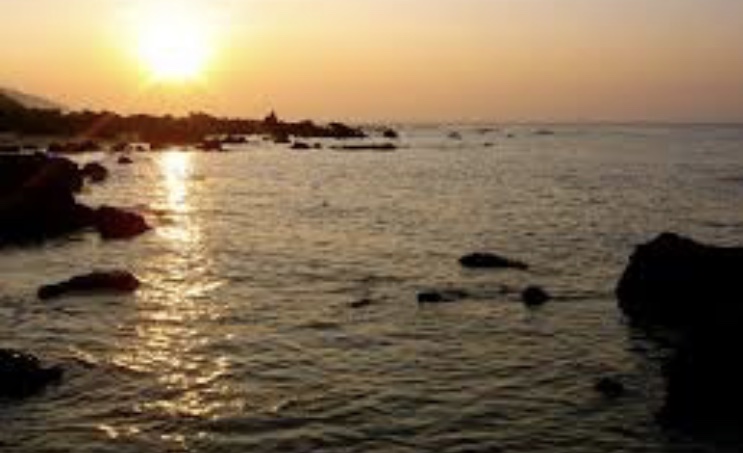 First things first: to address the men like worms thing. Balance requires that the Power shift like the ebb and flow of the tide where the leader of the dance changes based on what is required at the time. Male and female are equal with neither being a worm on its belly before the other. It is highly unusual that any spirit of nature would demand such of one who is male, simply because they are male. Without male or female, there would be no continuation. Neither can exist without the other. Perhaps it was misinterpreted?

The rest seems plausible and I do not discount your experience. I do however posit the fact that what you experienced may be coloured by your own prejudices or, dare I say, self loathing. Something to ponder, and I mean no disrespect. Just playing “Devil’s Advocate”, here.

yes most of the time during my days ill get loud messages in my mind. im like huh, the fuck. lol but theses messages come when im in different places. just like you i hear spirits when im in the wild. you ground and connect better with everything. if you want to know more about the voice you should go back and offer the water something and meditate and let the mind flow in a blank state and wait for the spirit to answer. I remember i was on a cliff beside a lake mediating and about to do an offering ritual for ogun and I felt a huge wind blast hit my face from the lake and yemaya hijacked the ritual lol she really wanted to work with me. i was wtf in my mind when mediating. who this! yemaya! oh…lol.

Lockheart- I was thinking about the Mother Goddess as the earth at the time and how we’d mistreated her. How next to her we are nothing but a part of her. Hence the worm in front of the lady image I guess.

at a time yes.