Want to call on Enki. But last night

How do you summon / evoke Enki
I have driving utge to trsnsform to change to jump into the fire and dance crazy. I have been thinking about it for a while.
But not yet still working my way around / through Belial Azazel King Paimon Lucifer Lilith
I am greedy to know sll and become all an unstoppable thirst gets more n more. And yeah i can be a show off but thays ok.
Seriously

When i called Azazel last night at end of it i was feeling very hot n sweaty very hot. Had to strip (i like doing evokes n meditation in the nuddy nude) but apart from that i didn’t see having struggle with focus… &
I sketched this but ? Is it something he projected to me or what i remember hearing 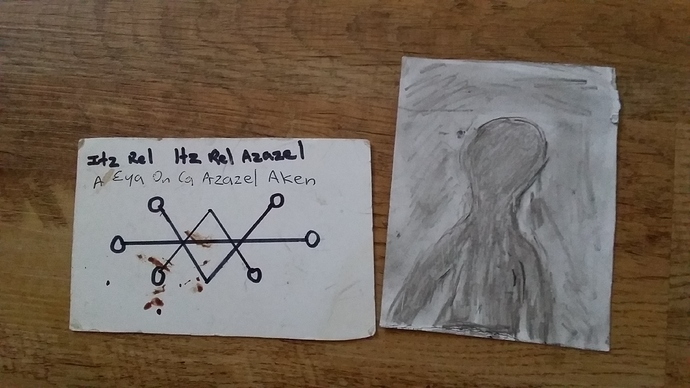 So i figured i really need to up my astral power and become my god self that way i can create better / commucate better / manifest & heal better.
I heard on an EA vid of calling Enki to receive a priest name… well years ago when i received a name aka Morgana it is a name thats me but it is not ultimately my other name. I am committed to my evolution to my deification. And sure my living status is… well.
So i asked if i get the changes in my life that we need/ want the books etc i will invest in purchasing the sigils as jewelery snd display / wear them but this i did not write as a pack just a vocalized ideation in my temple and Im arrogant enough to assume that theyre listening and are i nterested

Please find time to respond
Thanks

It would be the same way with how you evoked Azazel, but you would either have to make a sigil for Enki or evoke him with no tools or anything like that.

At some point, a ceremonial magician needs to learn to take off his training wheels and evoke by name (and eventually purely energy) alone. Just get into a trance state and use the name as a mantra. This was how I evoked angels before I began working with the Slavic Bogi (Gods).

Or you could switch systems and become a Shamanic magician and journey to his location.

i like doing evokes n meditation in the nuddy nude

In Slavic Koldovstvo (Witchcraft), we observe three taboos, one of them is ritual nudity.

Ok thanks so its really just a simple nothing elaborate?

Wow. Really. I thought it was simply a liberation at first then became sacred as in bearing nothing to hide

Hotep!! Beloved let none sway your ways, we’re we not created in the image of God to become God then are we not meant to be Nude as God Created us? I’m little Wolf hah new here and interested in Enki as well I’d like to know your experiences…

Welcome @Nashoba_Eloym It is a rule of this forum for all new members to properly introduce themselves, so PLEASE CLICK THE LINK BELOW and tell us about yourself and any experience you may have in magick, such as what you practice, how long you have practiced, areas of interest, etc:

@DarkestKnight Hey have you by any chance worked with Enki before?? He’s basically Satan but a different side of him right? I was doing research on him And then I stopped because I saw a post on a thread (can’t tell if it’s true though) something about he as a psycho crazy sister That’s stalking him across the galaxies or something like that so therefore parts of him are scattered so he rarely exists anymore Is that true???

enki is lucifer before he was lucifer

Sorry, @Excalibur I have not worked with Enki.

oh that’s fine. I was debating on creating a thread about this subject. But I’m not sure.

Bel Zebulon is Enki
As He told me.
Could elaborate too Fucking tired…

Shared this with @Yberion (in März)
Ask @Yberion if this was accurate.

Bel Zebulon told me at the time that this was One of His “Faces”, but not for Me to access yet. It was one of His Primal /Original identities.

He’s got a good deep look into sumerian Pantheon.

Saturn was the old Sun,
before Helios / the current Sun was formed.

As for Enki, he was indeed the being known as Lucifer. Lucifer is a latin name, Enki is a Sumerian name. It’s just the story of Enki that lived on and some stuff changed. If you see it from a historian’s spectrum. In other words, a great being such as Enki, couldn’t just be forgotten by human history. So it continue living on by different names for each culture. But the original name we have in human history, is Enki, son of Anu.

Of course, it’s not uncommon that spirits with such multiple identities also have multiple aspects or masks. In other words, you may get a different energy when you summon Enki and a defferent one when you summon Lucifer. That’s okay! Things happen in the spirit world that we don’t fully understand. However, Enki is a powerful being that loves humans, so he likes working with them. He wants to see them grow and help them return to the age of gods, while keeping their free will and freedom.

He’s our Creator. Inanna was lightbringer friend. In the beginning there was nun, nothing yet there was “God and the word was with God, and the word was with God.” Right hand of God Being Lillith or Inanna Ishtar. She was our womb I believe. Though this may only apply to self as ive traced my genetics to Seth and Anat. As they’ve always been with me. It was Anat who came to me at 9yrs old calling herself the shining one goddess of joy “Gala-Daia Seraphin”

Marduk Bel Zebulon many faces our Father has wore including Set.