This is one of two spells I performed with the god Verbt last night. The other one I will have to post in the Baneful magic section. But before I go into the working itself, I do need to give some background on Verbt.

Verbt is a member of the Illyrian pantheon. The Illyrians were believed to have lived in the Western Balkans, mainly in the lands of modern day Serbia, Croatia, Bosina, Slovenia, Montenegro, Kosovo and Albania. He was a god of Weather and Storms who was credited to having control over Fire, Water, and the Northern Winds traditionally, although he gave me some insight that he also influences anger as well. He was the counterpart of another storm deity named Shurdh who ruled over lightning and thunder. According to folklore, he was both called and banished through noise, as well as having a distaste for uncleanliness and foul language (although my experience cannot confirm or deny said claims).

As he is a god and not a demon or angel, I had to get a bit creative for his evocation. Since I was more interested in his help in regards to preventing fire, I used a Sun Kamea (as the sun is the greatest physical manifestation of fire) to create a sigil for him. I have covered how to do this in my Kamea tutorial so I will not cover how to do so here, but here is the final product: 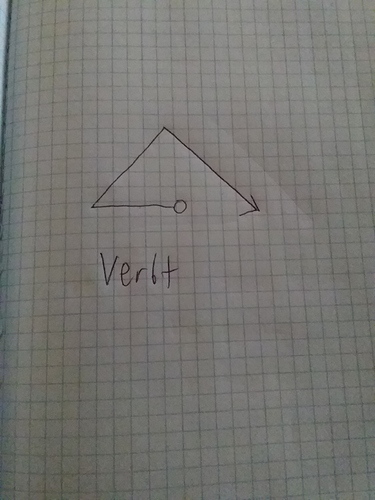 Using this sigil, I set up my altar the usual way with three candles to form a triangle. I set up additional candles on the side to really amplify the presence of fire. I set my censer in the middle of the triangle and lit a charcoal disk. Finally, I placed the sigil in the back where I can see as well as some index cards to the side.

I lit the candles and began my ritual by setting up a barrier against impostures (I use a ring of fire mediation to do so). I used some desert ambience music to set the mood and threw on some frankincense. I closed my eyes and focused on my breathing, allowing my heartbeat and the music to induce the trance. When I was ready, I gently half opened my eyes and gazed into the smoke, chanting Verbt’s name.

He was actually very quick to respond, manifesting as a man with a very stotic attitude, but with the stare of someone who you can tell holds a lot of power. We chatted a little bit with my gratitude for appear and explanation of what I needed down, where he informed me that I was asking too little. He taught a curse I will have to share later.

Getting back to the ritual, I wrote the names of the individuals I wanted to be protected and stated:

“Lord Verbt, master of flames, storms and the northern wind,
Protect (said name) from the fury of the blaze,
Not by your hand but from those who abuse your gift.
Let danger reach them only as cold ashes,
Keeping their hearth and kin safe from harm”

And then I burned the name as I stared into the sigil, visualizing a red wind being carried from the smoke to their property, directing the energy to form Verbt’s sigil on their door. At the end of it, I pricked my finger with a Lancet and redrew the sigil in my blood as an offering, showing i was willing to bleed for my results. I then burned the sigil and thanked him for his help.

There are other offerings that can be given of course if blood is not the route to go. Traditionally, bread was a big offering to give, although he did tell me he would like spiced liquor the next time I call him.

As far as results go, my friends and family were unharmed and their properties were not damaged during the protests in the city they lived in. While magic is no substitute for fire safety and escape plans, it does help to have friends in all places and I would definitely encourage working with Verbt if you are interested.

I’ll have to try this ritual out. I have fam in vegas and i heard they just started rioting down there. 🤦 fucking worlds gone crazy.

Right, may they be safe out there.