Has anyone here heard of something called a « vampiric Valkyrie »? It looks like a sexy tall woman all dressed in leather like military clothes with 2 black wings and shoots these poisonous darts that look long like arrows from some sort of a long black blowgun. Face looks typically like a vampire with the two fangs sticking out.

Any idea what the heck to do with such a creature?

Hmm… I can ask a few friends and do some research, but I have to ask you a few more questions about this creature: Is it bothering you? Is it talking to you? Does it want anything from you, and if yes do you know what?

It’s shooting darts at me. And I see a hand out of nowhere catching them before they hit me.

I was able to get a sigil but it’s bizarre because it’s not the symbols that I typically use for constructing sigils from my current. I’m thinking this is sent by someone. I have two versions below one is partially drawn but was difficult and The other was given to me upon Request.

I was given a warning not to interact with it, not to evoke it and ignore it as it is dangerous, 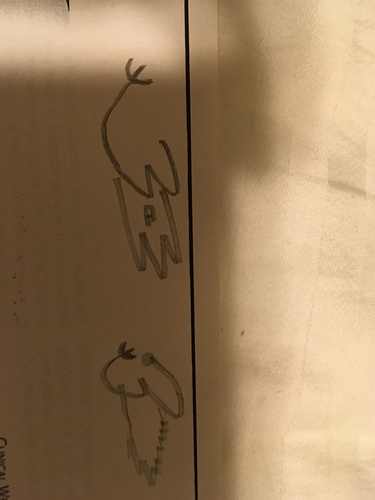 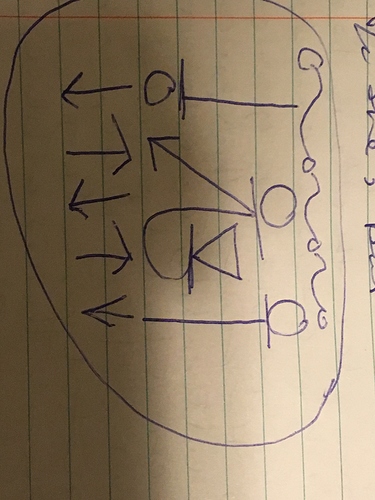 I’ve had a series of very stage bad luck events one after another all of a sudden…so I’m assuming it’s her. What’s strange is that once I took care of one I saw a bunch of them coming to attack like I was being ganged up on in a school yard.

I’m dealing with it quite well now that I know what’s going on. I’m good now but for 2 weeks it was one bad luck after another.

Essentially I was told by it that it’s job is to assassinante me. So im assuming either I pissed someone off and this is like a curse/hex or someone is testing my defences or there is something I’m not aware of.

I was also told that few people will respond to my request as it seems that those who know what this is…tend to stay away. So… im curious what you can find out.

As for me I’m good. Im dealing with it well. Whoever sent me this and it’s friends…will find out shortly why they should not have done so.

So let me get this straight. You are being preyed on my a tall sexy teemo from League of legends?

Jokes aside, This is unlike anything I have ever heard of. I can only wonder who you pissed off to have a team of poison arrow blowdart shooting valkyries preying on you. I would think that being able to talk it out is a no go, but who knows it may work. Has it been consistent or has it declined (the attempts)

This is beyond anything I know. But I wish you the best.

Quite consistant . I gave protection, so I’m good now that I know what’s going on, but for two weeks I had bad luck like you can’t imagine : Lap top breaks suddenly , followed by weird health issues leading me to go to the emergency hospital , to bring locked out of my own house with the lock refusing to budge , to having toilets clogged with the plunger unable to fix it until I used magick to get it done, to strange arguments with close family members non stop for no reason…must I continue ?the list goes on. One after another non stop.

seems to me like a frontal assault didn’t work, and now maybe it is a term on more subtle or distressing things to distract.

Yes, that’s why I said my drégences were are being tested and now it’s as you said full blown frontal assault. It’s an attempt to destabilize and cause problems…fir whatever reason.

I don’t know anyone however that I could have pissed off so much and so badly that could be doing this. Besides , these are a very specific type of entity …I’ve never even heard of this being before ( the dark Valkyrie that is).

It may just be a mob type thing I guess, like how hit men are to mob bosses. I wouldn’t be able to guess who or what you may have angered, but whoever it is doesn’t like you very much that is for sure.

Why poison though? I would think that there would be a better way, sedative, or what have you it seems odd that it would be poison when you look at it.

I have a theory. I am presently working in a very negative environment at work. I am setting up a covert shrine as an artwork to change the vibrations. I think I may have pissed off the negative beings who are maintaining the negativity. That’s my theory . I have 500 clients in 4 buildings many of whom have depression. That’s my theory . This is paybacj for disrupting the energy lines.

It may just be that.

As they might’ve seen that you are trying to solve the problem they cause.

Stay strong though I believe this to be a mental game, don’t lose your shit.

That is really all I can say. It is a strikingly unique topic and I wish to hear more as it continues If you don’t mind that is.

This is actually an opportunity to grow and see how to get myself out of it. Besides I am making a shrine green Tara who is fierce so I guess I’ll have to ask her to help me out , evoke her.

Thank you for for your encouraging words

I live with this quote. When I had an entity in me and I didn’t see it as a bad thing I saw it as “a learning experience” Oh Intent is really important when summoning, noted. For example.

Have you performed any types of rituals, spells or other magic for the fast few months? Maybe you did something, or maybe you KNOW something you shouldn’t. Anyways, the descriptions sound a lot like what my friends looks like… what hair colour, eye colour does it have? And how tall is it?

Actually it’s been a while since I’ve done rituals. I was taking a break but had to resume because of this situation.

You say the description looks like your friend? I doubt your friend is lévitating off the ground because of 2 msssive black wings flapping

. The being is at least 6 feet tall(and I know no woman that tall), wears leather (again don’t know anyone like that ),hair black but face is fluctuating between a lovely woman to a monstrous looking vampire. Difficult to get a look at the eyes.

Out of curiosity are you in Brazil?

No, I’m quite far from Brazil.

The valkyries or valkyries (old Norse: valkyrja, lit. “who chooses the dead”), in Nordic mythology, are dísir, smaller female deities who served Odin under Freya’s orders. His purpose was to elect the most heroic warriors killed in battle and lead them to the hall of the dead, Valhalla, ruled by Odin, where they would become Einherjar.

Einherjar: Also known as “The Warriors of Odin”, the Einherjar are the dead warriors collected by the Valkyries to go to the palace of Valhala, where they will live in banquets and abundance until the last day of the Ragnarok. The Valkyrie chose only the best and most heroic warriors.

This can be a reference, I do not know