Hello, just looking for some help deciphering some symbols that kept flashing in my mind during my last invocation. Iv been working with Lucifer for a while now and always find it amazing, feel recharged and very positive. He has helped me with quite a few things including my sky rocketing anxiety. Anyway during the lastest invocation I kept seeing these 4 symbols,Iv compared them against some ancient alphabets I am familiar with; Theban, Celestial,Enochian…but nothing seems to look like these. The square around each symbol was very prominent as well, like Iv had a feeling they HAD to be in the square for some reason if that makes sense? Anyway, any help would be appreciated.thank you! 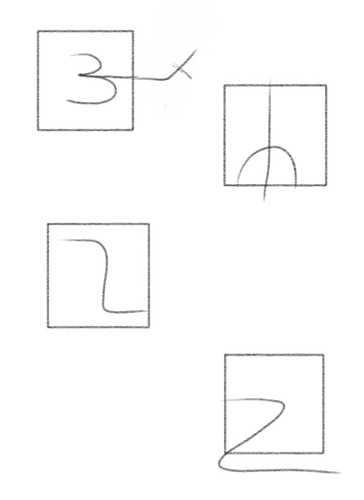 I also can’t help you there, but I’ve seen the second one somewhere before…I can’t remember where though…
But they have something to do with a ritual? Or perhaps runes?

Thats interesting, what was the purpose of the ritual if you dont mind sharing?

I’ve just finished calling the 73 Goetia… so i guess it would have been while doing one of those, its all a bit scrambled tbh tho i kept some logs of it all.

The boxed numbers and symbols indicate completion: omniscience, omnipresence, and omnipotence for your first symbols.

The second symbol of the upside down pitchfork or number 3 confirms the first symbol. The second symbol the Triad means beginning, a middle and an end or completion of your rituals. The power of three is the tripartide nature of the world as heaven, earth, and waters.

The boxed numbers 2 indicate perhaps a second attempt was focused on by you and is now completed.

Portals?
They feel celestial to me

Did u actually see this demon in person… as in like a real person?

Thank you, I love your interpretation. And it also makes a bit more sense now.
It was a normal invocation, me just sayin my thanks and having a good ole chat about general things. Im an artist and it all kinda picked up for me career wise lately so was sharing the experience of it with him as well.
Thank you for your input everyone it is greatly appreciated x

Thank you. Portals sound interesting as well, it definitely caught my attention as it was such stubborn flashy vision. I havent experienced it in that way ever before.

The grounded (earth) trident is a West pointed key to the Draconian current for the Qliphoth. It makes sense that Lucifer is connected to these symbols especially the trident. He is the Initiator of the Sitra Ahra. Seems like the tree of the Nightside might be a place to research. Just make sure you know what your getting into before using the key. 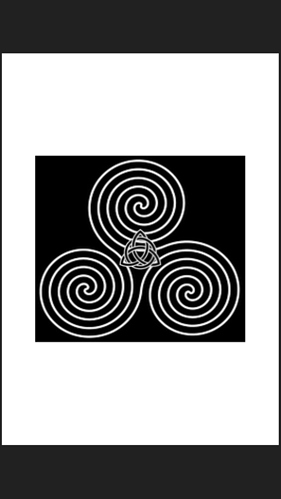 Its triskelion and triquetra, both Celtic. Whats your theory? Im intrigued

When law clerk mentioned omniscience, omnipresence, and omnipotence that symbol came to mind.

Nice. A version of the triple spiral symbol… You have two symbols combined as one.

The triple spiral, or triskelion, is a Celtic design. It appears in a variety of places as a three-faceted spiral (circles), three interlocking spirals, or one shape repeated three times. For Wiccans, it is sometimes adopted to represent the three Celtic realms of earth, sea and sky.

The second symbol is also Celtic the center is similar to the triskele, the triquetra is three interlocking pieces that represent the place where three circles would overlap. The triquetra is the symbol of a triple goddess it represents the connection of mind, body and soul, and some beleive it is symbolic of the three realms of earth, sea and sky.

If interested in Celtic history and there symbols i recommend two books that are useful for your reading:

Barry Cunliffe’s book, “Theyou’re Celts,” “A Very Short Introduction” brief but informative. Cunliffe touches on mythology, warfare, social strata, and the evolution of trade. Great read if you have an interest in the Celts. It really gives you an idea of who they were.

By Miranda Green: The Dictionary of Celtic Myth and Legend covers every aspect of Celtic myth, religion, and folklore in Britain and Europe between 500 BC and AD 400.

I can feel a unusual aura around the symbol. I have a ring to go with this symbol.

I will try this in future once I’m ready

To me, the first image somewhat resembles Lilith’s sigil flipped on it’s side.