What are your toughts on this number? The 666?

Kabbalah calculus?
Numerology of the name of Nero by the hebraic alphabet?

six-hundred threescore and six. It is the number of a man. I accept the traditional attribution of this number to Nero the cruel Roman Emperor. I do not believe as the Evangelicals do, that this number represents the impending rule of the Antichrist. Further I do not buy into their theory that all humans would have to obtain a microchip in their hands or forehead in order to buy or sell goods. Often this is viewed as symbolic, aligning your mind and will toward Satan.

Also 666 in popular culture is used to denote pure evil and the pop version of blackmagick and satanism. It’s more of a death-metal and teen culture number, like pentagrams or upside down crosses. They are employed for shock value in attempts to scare the masses, or more accurately their parents and the church they were raised in. I guess it could represent pure evil, like 777 is to represent pure good, or Solomonic magick. 333 represents half evil, and was also a number taken by the teacher of this forum for his earliest works. I took a play on that numbers game and went with 555 neither good nor evil, just neutral, able to commit good or evil acts of magick.

Kabbalah calculus?
Numerology of the name of Nero by the hebraic alphabet?[/quote]
What I know so far is that 666 was representing the Sun and solar deities. Then they associated it (not only that, pretty much everything) with evil and the devil (666 the number of the Beast as the song says!)
Now for most it’s something that has to do with satanism and black magick as interpreted by the minds of teenagers and scared people.

Also, another thing is the Sun’s Kamea. 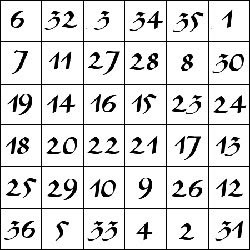 If you add the total of the numbers of the Sun’s Kamea, you will get 666.
So in the Kaballah, 666 always represented the Sun, the Tiferet.

"10: 14 Now the weight of gold that came to Solomon in one year was six hundred threescore and six talents of gold "

So, 666 is the person capable of manipulating divine energy and yet be an incarnated person. A Living God.

A carbon molecule has 6 protons, 6 neutrons and 6 electrons. Combine that with the knowledge posted above and see what conclusions you come to.

666 being attributed to the Sun makes a lot of sense since most of the older “pagan” religions were a practice of some form of Sun worship. Just another way for the Judeo Chritian religion to demonize the old gods.