So I have just finished performing tonight’s invocation of Lucifer. I want to share tonigtht’s revelations from invoking Lucifer. 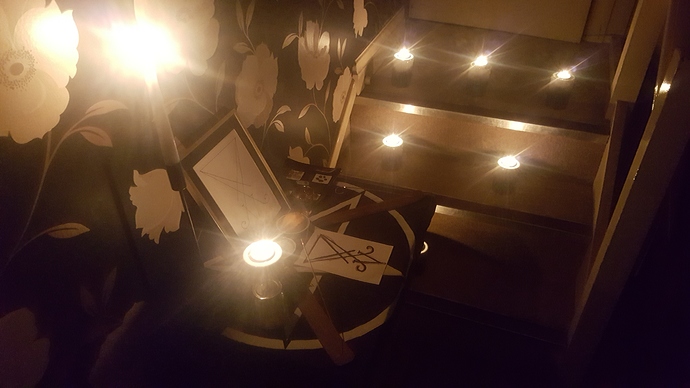 I performed the full invocation ritual (as laid down by Connor Kendall).

So I got to the stage where I could apeak to Lucifer. As always I limit to 3 questions. These are as followed:

• Lucifer replied with, “You have put in a great amount of time and effort. When you first consecrated our altar I saw the apprehension within you, that is why it only partially worked. Since you consecrated it again your rituals will yield better outcomes, providing you put the same amount of time and effort into each ritual. The altar is near perfect and in time it will evolve as will you. I would like the image of one of my aspects placed upon the altar. Also use different colour candles from time to time. You know my favourite colours.”

• Lucifer answered this in a cryptic way. “The story of how I became Emperor is a long, epic tale that is known throughout the Infernal Empire. I could tell you and you could transcribe it, but I would like to show you, however, you need to work on yourself as the journey into th e past requires more energy and power.”

Good work dude. So as it seems, you’ve done well. Very cool that he wants to take you on a journey and show you things.

Thanks for your kind words. I am immersing myself deep into LHP. I know there are some great gifts waiting for me like there is for all of us

Pretty cool, make sure you reveal the journey he takes you on when you see how he become the King. Also I’m curious what aspect are you gonna do? Or are you deciding.

I will. Not sure when that will be. I don’t know what aspect he will appear as. I will talk to him and ask him, he may or may not tell me

When you invoke Lucifer or any other spirits they more often than not talk to you in your mind. Everyone has an inner dialogue and they know how it sounds. When Lucifer answers my questions in my mind it is a different voice

no yes yes, i know about channeling and all of that. I just never heard Lucifer himself… I think.
The only time i ever called on him i was still pretty green. I could feel his presence but i couldnt actually hear him (and honestly i was a bit afraid at the time, ngl… again, pretty green and all of that). When he left he left this huge amount of energy in my room. Quite unique energy too.
The good thing is… the things i asked him help with over time i think worked out. It came to pass. Invokation/evokation, Astral and Etherical Projection, be able to hear and see the spirits better. I definitely became better in all those things in the past year… I think he understood how green i was and was helping me slowly… in a rhythm that was comfortable for me.
I’ve been thinking about calling him again… but i need to put some thought in it. I dont want to call him JUST for calling him.
The thing i could definitely use help with is becoming more in control of my own thoughts… There are some thoughts, images and even memories that… i dont want it having access to my field of thought anymore.
…Being able to work energy better. And of course, deepening in those basic skills from before.

It seems like you have come along way in a year, awesome work.

I suppose if I was at the same level as you are now I would look to what I want to achieve and which direction I want to take my magick or how deep I want to be imersed within the LHP.
I am sure Lucifer can teach you a ritual on how to control your thoughts…I think you should invoke him or even do some petition work with him. Really be open and honest with him and detail that in your petition. I am sure he will help you with that. Take the plunge…what have you got to lose?

There are days that i dont even practice magick… other than a little smudge… a couple of small interactions with my servitors.
And then there are other periods where i do 33 days rituals… so, it isn’t a constant flow of magickal work for me. I’m just trying to enjoy life you know… I suffered with depression and suicidal thoughts for like 15 years (since my early teens) so now… i’m just trying to enjoy the good things in life you know… good food, a cold beverage… a babe spreading their cheeks while saying “yes masters”… you know… some entertainment… the little things…
I have created a 11 days 33 attempts astral projection plan/schedule that put close to my bed over a month ago… but havent started yet… i’ve hundreds of books of magick and i’ve read (really read) probably 10… I’ve a book of Jinn Magick open in front of me for like a weak now (from which i’ve barely started reading)… so dont want be like me

Sometimes i feel like there almost something… that doesnt want me to develop too much too fast… Or maybe i’m just making excuses, idk.
I need to figure out my shit and handle it properly. Maybe there is other thing King Lucifer can help me with

The path you are walking is going how it is suppose to based on your energy and the emotions you have. Slow and steady helps you to process and evaluate your skill step. I have been practicing magick for just over two months. The morning ritual I perform for the past 59 days has help me impove by 1% everyday, so that means from day 1 I have improved 59%. I recommend you try this ritual for 7 days and keep a journal during that time. This ritual is a great emtional and mental detox and empowers you spiritually.

Since I started this ritual I have noticed a difference in the results of my other rituals and my energy has dramtically increased. If you decide to undertake this ritual daily I would love to hear how you are progressing. You can pm if you need to.