It’s been a whilce since I offered free readings. I had lots of private and work stuff to do during the last weeks.

I am offering three free tarot relationship readings today as I want to try out something new.
The first three people that comment on this thread will be the ones who get the readings.

Hello can I have Please ?
Thanks

Can I have one please

Could I have a reading please about my ex?

@Thierry007 @Andina
Sure, I just need the information =)

Sure, are you male or female? And what about your ex? Exboyfriend or girlfriend?

I have pmed u

I am Male, ex girlfriend 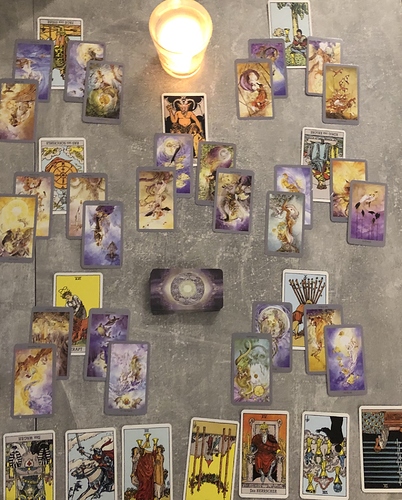 a lot of cards jumped out while I was shuffeling so I am getting the feeling that a lot is going on between you and the person at the moment.

There seems to be a feeling of dependence between the two of you.
One of you sees a lot of possibilieties but I am getting also fear and doubts about them. It’s possible that the two of you don’t want the same thing and this creates differences between the two of you.
One of you wants a wish to be granted, I am getting that this is also about taking more responsibility for herself, taking own desicions, getting happy. This person seems to blame the other person for something. A feeling of beig unbalanced, not being able to do what this person really wants to do.

The other person seems to want something that is right in front of her and she asks herself, if she should take it. Therse seems to be something between the two of you that is not clear yet - you didn’t talk it trough and so she doesn’t know what to do about it. It is possible that this is about some kind of competition.
This person wants to grow up. She seems to have the feeling that she “lost” in a conversation with you and didn’t make her point vey clear. She wants to work with you together and needs your support for this.

The person seems to try subconsciously to find new ways to show her inner needs and wants. There seems to be the wish for a change, a new beginning, new ways - but also (sad) memories and trouble of letting go (the present state).
This is about the need of emotional healing - this knowlede about it is just subconsciously yet probably. Also emotional new beginnings. This person wants to work together with you and really wants a healthy and happy relationship.

This person behaves towards you as if she’s sacifices a lot at the moment.
She has doubts and realizes some challenges that are about to come. But she also wants happiness and calmness in family matters.
Subconsciously this person wants a female leader, someone to support her to take the step into the unknown, out of the save world she knows.

You seem to have a lot of worries about a situation. You also seem to faith the challenges that lie ahead. You seem to feel kind of lonely or left alone but you are also aware of your knowledge and the advide you want to give. You are passionate and you protect the ones you love - so this is also your behavior in this relationship.
You seemn to grief about something that you feel you might have lost in this relationship.
You seem to feel like you have lost some kind of strength or control over a situation which makes you get doubts and feel weakness.

Subconsciously you know about some changes that are about to happen, but you wish you could slow them down a little. It is, as if you wished that you could change fate a little. You feel like you have trouble concentrating in this situation, so you want some more time to really think things through and take the right desicions. This is about a wish and a wish fulfilment.
Subconsciously you really want happiness in this relationship and your family life. You are doing the things you do because you want the best for everyone.

You want to show the other person, that you have trust. Sometimes you get kind of lost in your emotions and it’s hard for you to control your behavior. You have a very strong will, but instead of working on the problems you know about, it seems like you more likely put them to the side and don’t really talk about them.
But you also feel that things changed already for the better and this has influence on your behavior, although there still seem to be some emotional fluctuations sometimes.

I think this is a lot about a strong connection, a process of growing up and letting go - not too much but also not too less. Communication seems to be important. Showing support, giving advice, but also room for own expriences.

I hope this resonates

Thank you so much, very detailed, excellent reading!

(also via PM if you prefer).

I would love a reading.

I am sorry but I only offered three as these take a lot of time and energy. 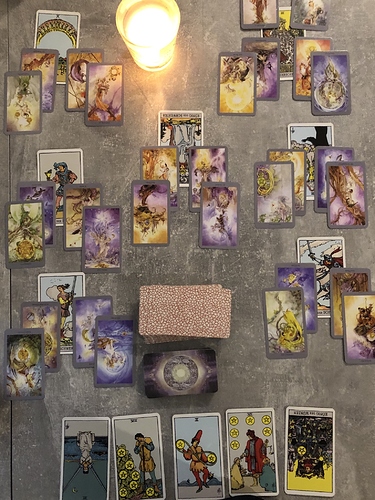 one of you seems to focus a lot on work or studies at the moment and it seems like the other person kind of pulled him or her out of this deep state of inner calmness. So what happened, was that this person had to deal with different tasks and it didn’t seem to be easy. Because, when a connection seems to become a burden, lots of people reject this connection rather then trying to work on it further.
It probably seemed as a fair desicion for the person that took it because this person probbaly didn’t feel the need or the strength to put more effort into this connection so he/she rather let go of it.
It’s possible, that magick was involved here somehow?

There seems to have been sexual energy between the two of you but also other persons involved, maybe subconsciously.

Though Pegah still seems to be kind of optimistic in this connection and is still thinking about reconcilation sometimes, seperation seems to be more on her focus. I think she thinks that the only possibility for this connection would be, that the two of you work together, she’s still positive about it somehow, but she also has doubts and fears. I am getting vey mixed signals from her - as if she doesn’t know what she wants.

I am getting that there is something between the two of you but probably not really in a healthy way. It’s more about competition or authority and not really caring about each others needs. If you used magick on her, then this probably has an influence, but might not be enough or would really need a lot of effort.

Subconsciously she seems to have a wish about this connection. She wants to leave something behind, she is missing something in this connection. She also seems to be influenced by other peoples opinions or things she might has been told.
Subconsciously, she wants freedom - she wants to have success and be admired for the things she archieved so far. But she seems to feel rejected and excluded somehow, what has an influence on this relationship. Maybe prejustices could be the reason for this.

She seems to behave towards you as if she really knows what she wants and protects her needs. She seems to look back into the past a lot and it seems like she feels like a wish of her has been granted, what makes her feel really complacent.
She is disappointed by you somehow and she probably shows that. For her, it’s over right now. Your connection seems to be unbalanced. It could also be, that money has an influence in this connection or that she shows or thinks subconsciously, that you woundn’t be able to give her what she wants.

You really want to get to know her better and want a good and healthy connection with her. Her rejection made you feel weakness, but you still want to work on this connection. You are really focused on her and you seem to like her lifestyle. You are getting lost in your emotions subconsciously and this connection might even start to feel like a burden as it’s not the exiting competing anymore it might have been at the beginning.

You seem to be fascinated by her and also noticed your interest in magick - maybe even more, because you met her. You seem to blame her somehow for the feelings you experience at the moment but there is also still hope on your side and you want to heal this connection somehow.
You seem to neglect your responsibilities at work or university because you think a lot about this although you would have so many great chances if you’d put your focus more on them - and subconsciously, you probably know that.

You seem to behave very careful towards her as you don’t want to make any misktakes. You also seem to look into the past and try to figure out what happened, what she liked and what might have made her angry or reject this connection.
You seem to ask yourself if there is still an oppurtunity that you should take and if you might miss something important. You seem to grief that it didn’t work out as you wished but you are also trying to accept it somethow though it’s hard and you also still try to make it work out.
If you tried magick on this situation, I think that you are wondering why you don’t get results and why there is delay and the things you wished for are not happening. This makes you, subconsciously, think about other opportunities and requestion if this connection is really the right thing for you.

I am really sorry that I don’t have better news at the moment, but I think, though she likes you, that she focusses a lot on her self and her career at the moment and that something has happened between the two of you, that had a huge influence on the trust between the two of you.
I would say, that you should focus on yourself first and give this connection some time - also some time to heal maybe. Right now doens’t seem to be the right time for big steps towards each other.

I hope it resonates

Perfect reading.it seems you spend a lot of time thanks for your help and effort

I would love a reading if you are still offering.