The occult law of reversal

Jimmy page 's srairway to heaven is written in a mysterious way.
Then guess what crowley said in Magick in theory & practice : that the magician should adapt himself for daily exercice writing walking and talking reversed.
Btw this thing is present in Obama speech " yes we can " reversed " Thank you satan " and the rothchild family invitation card 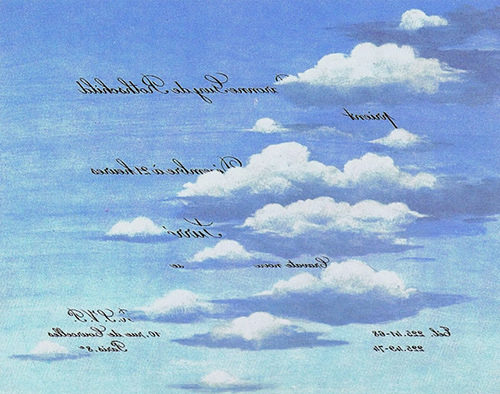 What about This law and why it is so relevant

First of all, that’s not something that I believe and mostly it was Church Propaganda. We may say it was truly black propaganda; they may say it was just the request of Heavenly father anyways. So no need to argue, respect is the best.

The underlying reason for all of this was that the World was changing, Galileo who once beaten by the Holiness (by the help of Science of that time -that’s also an interesting point for dogmatic science lovers to consider too; not open minded real scientist that we love) now He was a hero. Galileo’s vision did become a rule. The Sun was the center of our small system of planets, not The World. Even there would be a possibility of a thousand more worlds which was also contradicting with old views of Church. The world was round and so many more things, society, culture everything was changing. So the great change was at the door ( Pisces to Aquarius - Zeitgeist ) and yes it should be fought at all costs. Everyone was enemy; whether they had some good sides or not, anything that fosters the change was a problem. Osho, LSD, Hippies just because the World as they know was going out of their hands; so the best way to defend old, according to them was to refuse the change and yes they should blame Satan for anything. Indeed Satan was busy to put Dinosaurs fossils all around…

As for the reverse messages, even I do not believe the story of “yes we can”, was “Thank you Satan” ( you should force it so much). All the marketing industry use reversal messages to a degree because it’s something that subliminal mind can easily accept; way better than direct messages which are refined and mostly stopped by the guards of our consciousness generally.

For example, if you ever want to prepare a subliminal message, if you say it openly normally conscious mind would easily refuse it if it’s not real and mostly not. If I record for example “I play basketball very well” and record and listen like it is, its effects would not be strong because I already know consciously that I am only 6 ‘’ tall and I am not the best player around. But if I listen to the same message in reverse, my conscious mind will be out of the game; simply because it’s a nonsense phrase for it; something gibberish. Hence the conscious guards are now neutralized, I may plant it to my subconscious easily. So reversal messages are useful because whatever you want to plant it in your mind, can easily go to the real target, the subconciouıs mind.

In that way, reversal messages can also be used in magick too via magickal alphabets or in a different way; just for the same reason above.

Having said so, please do not believe in such theories as above, because Satan if he ever needs to use our minds, He has many many ways, way better than Obama’s thanks: These are just fun theories and nothing more but always exploited to confuse minds and reverse the change.

The Only Thing That Is Constant Is Change; if only they knew it.

You may want to read Kybalion if you are interested what lies beneath, you will love it. A real masterpiece

Thanks for your correspondance.
But i hope u will believe me if i told u that all u said i already know it.
But i disagree with u regarding the propaganda issue. It is not. Crowley insists toward this practice. There is something beyond …

What are your views, if you don’t mind, please.

Obama would have said “Thank you Satan” privately but why in a way “yes we can.” Satan would hear his praise all the way if he wants to.

Indeed even I am not an Obama fan, I like him. He did very well against the real evil, the one who took pride in killing innocents in 11/9, Osama the most wicked.
So if Obama thanks to Satan for helping him to destroy such an evil man “pure evil” indeed…, then I also want to express my sincere thanks to Lord Satan for helping to a better world

Then maybe yes. BUt here is the thing, these Kinds of things necessit another angle view of prospective. These things of reversed law comes to something. And maybe for obama it was a coïncidence but for rothschild family it was something priceless to understand. And for led zepellin stairway to heaven bavkwards mysteriously write itself.
In magick in theory and practice of aleister crowley, he said let the student right reversed think reversed and talk and sing reversed and get used listening to vidéos backwards."
I just wanna understand what is behind this in an occult point vieW.

I love Crowley. His magic was certainly effective and he was not stupid. He was aware of some supernatural realities and sought to exploit them for ascension and divination.

He is seen as wicked, and from the very beginning he probably liked that image, the power within, some say that he wanted to be seen as an ambassador of Lord Satan in a way. Certainly, he had the opportunity to gather deep secrets. But we should also remember that he had a different view of the Goetic demons. Instead of actual entities, he saw them as aspects of a person’s mind, which is a quite secular and scientific view.

As for the Law of Reversal, I indeed have some theories but before explaining them I think basically it is a tool in the way of more important law, the law of Self-awareness, which is here shared by BALG.

The church or the ones sponsored by them attack the law of Reversal to depict something evil within but I sense that they hate truly the Law of Self Awareness. In reality, nowadays there is no a war between evil or good anymore at least within humanity, but a war of interest, not everybody acknowledges that and this is necessary as they can be exploited more easily. These are ways, anyone is free to choose one. Nothing more, if one thinks Jesus way is the best, Good luck with that but they should learn to respect everyone in their way.

Just think for a moment if the Church was representing The Light, then why in all the “dark ages” the only and most powerful force was The Church. They killed cats, why, just because they were deemed as evil by Holiness (servants of Satan), what happened was the immense increase of the population of rats and fleas and then the Black Death wracked havoc on Europe, and it killed 45-60 % of the population. But make no mistakes God is on their side, can it be really? They have burned the greatest and most important library in Alexandria and all the professors within it, and we have lost all great works and the inventions of the times. Can that be the work of Light ever? Even steam machines were invented, and we lost 15 century, but yes all done in the name of God… Sure it was mere exploitation of God, and still, they look for it. The reign of Light, they say, but we had only darkness, no right for woman, nor man, no hygiene, no science, no safety, no love, all we had was only darkness for ages These years were the best times of The Church and yet worst of humanity. That should say something if one can only think.

Then thanks to Masons/Templars and Magus; we as Humanity had the opportunity to end the Darkness and have the Light shine in the World again. Why I said all of this because one should who really they are and why they attack those Laws, not for good.

If I get back to backmasking in itself it is not just a tool, something very neutral, like a pencil. But it represents and may lead to some “tear” within the fabric of reality which is something a Magus is after. Another use can be for divination. But all is done here is to make one ready for the second rule of self-awareness which represent the “real prize” for me.

This is what I think. I want to hear from you too. I am not at a level to fully grasp the real meaning of it yet, but I hope I will. Most of us hopefully will do so and IMHO, this is important for the better and more free, more joyful, loveful days of humanity.

But we should also remember that he had a different view of the Goetic demons. Instead of actual entities, he saw them as aspects of a person’s mind, which is a quite secular and scientific view.

Crowley knew better than to write this.

Crowley knew better than to write this.

“According to Crowley, magical phenomena are made up of six things: touch, taste, smell, sight, sound, and the mind. The first five, depending on how they’re stimulated, cause changes in the brain, which are then manifested as magical results. Once the mind processes what it’s receiving from the senses, it projects the results back into the physical world, and that means that all the demons and devils come right from the mind of the person conjuring them. Each demon is associated with certain signs, seals, and names. The names are essentially vibrations, which stimulate a part of the brain and allow the caster to control the part that is associated with that particular demon. If you’re looking to summon a demon that’s going to help you with your math homework, for example, you use sights and smells that stimulate the logic part of the brain while saying the words that also stimulate that same part. That makes magic not just a matter of summoning demons and unleashing hell on the world. According to Crowley, it’s the most natural of all knowledge, the most divine of all actions, and the most virtuous of all philosophies.”

What I understand about the “Law of Reversal” is as follows: