The meaning of a pentagram

The other night while i was sleeping in my third eye popped up a pentagram sigil and all around it were geometrical shapes…Does anyone know what it means to see a pentagram in minds eye or what entity is associated with it…I currently work with Belial, Lakshmi…Thanks!

It is obvious that the Deity wants you to worship and would like you to continue with another ritual employing his sigil. The Deity in question must be the last Deity that you worked with.

I guess i’m a little confused…why wouldn’t Belial use his own sigil instead of a pentagram?

The pentagram is a symbol of the syncronization of the 5 senses. The first 5 main chakras.
If you had a dream about it is a sign to get in touch below first.

Thanks…i didn’t have a dream, the pentagram appeared in my third eye surrounded by geometrical shapes…that is the only way i can see any entities…they come to me while i’m sleeping and some how i awaken to see them in my third eye…

5-Mars-Geburah. Can be a quick breaking down of things, attack or Defence, etc

Some say also the 4 elements and the spirit. Some say man with arms/legs stretched sometimes in a circle to form a pentacle. 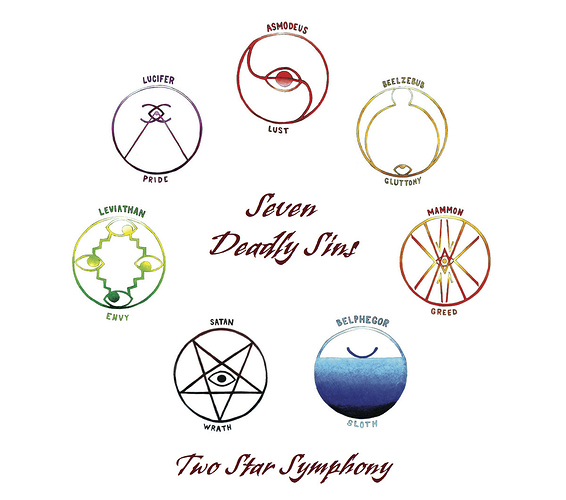 But Generally, it’s Baphomet.
/ The Pentagram of Lust,
the Black Magick Pentagram.

The Seven Deadly Sins are what being a human being is all about! lol

I know, but that’s merely the specific emotions and what they are resulting in / which demons represent which emotions specifically.

“they’re not the hidden link. They are the obvious, in fact so obvious that they are well hidden in plain sight.”

Satan : " I’m not an enemy of humanity. In fact, I am humanities biggest fan!"

It might be that the Deity responding to your ritual is not Belial but another spirit. Focus on your next ritual or casting and ask for a sign to what Deity will accede and respond.

If I may ask what did you do to activate your 3rd eye?

I think it is Baphomet…have you worked with Baphomet??? I’m trying to find info on him/her…

Wasn’t there 8 at one time like faithlessness or something?

The Church has settled on a list of 7 mortal sins but the Fathers of the Church more often referred to 8. The deadly or capital sins - covetousness, envy, sloth, gluttony, lust, anger, vainglory and pride - are the most significant and insidious temptations with which we must contend. A first step in countering their influence is understanding their psychological and spiritual roots in human experience. Standing humbly in the truth about ourselves, we will appreciate the power of God’s love to heal and strengthen our nature, for love is not jealous or boastful, not arrogant or rude, not irritable or resentful.

The deadly or capital sins -

There are also a number of other sets of virtues, including:

You can also be seen as being bold and daring if you break the virtues. Many modern groups (most notably youth) deliberately form their own identity by going against the values of others, so be aware of the other person’s real values.”

Sometimes I think a 4th

The Principles are combined to form the following Eight Virtues:

This happens to me on a near daily basis. I actually do it on command a lot for protection and empowerment in various situations. I see/visualize the inverted pentagram above my head with the bottom angle touching the center of my forehead and draw energy from it in through my third eye like a lightening bolt galvanizing my body and senses with power. It’s something that just started happening one day and never stopped. I dig it.

Thanks I’ll check them out.

Does it matter is it is inverterted, Star, turned askew like the dial in the oven? Gonna bake a ritual but it’s gotta be juusssst right.

Baphomet isn’t really a favorite of mine ,
However I’ve definitely met him, and he seemed to like me.
Imagine a being which isn’t bound by gender at all. A true hermaphrodite.
That’s the most known human form of him.
However, I found him to be even more powerful when he’s been around as a fly / in insect form.
He manifested out of my arm, into a complete Fully physical form once.
So when seeking to master manifestation,
He might actually be a (perhaps hidden} master and may teach techniques which are Completely manifesting from nothing into full physical state.
If he can do it with a living creature,
He surely can do it with objects aswell.

However I find it very difficult that there is so much satanic dogma attached to him,
That really makes a problem with approaching him with a clean, Empty mind.