The infernal star in digital version 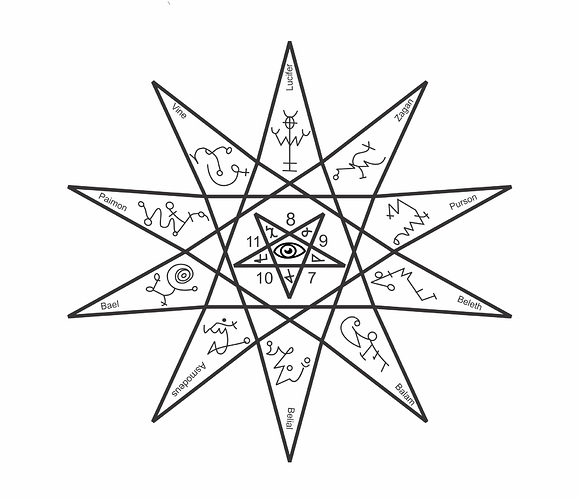 Infernal star meditation
as easy it sounds the infernal star is powerful and it can make deep connections to the infernal empire and the 9 demonic kings,and i will aslo fill you with infernal and dark powers

go in an meditative state
go a few inches above your crown chakra
and visualise and structure the symbol
so much that it feels solid ,like its really above you
inhlae the powers of the sigil
become the infernal power

you can chant the names of each king and lucifer 3 times,but chanting and vibrating is really up to you

the symbols on this decagram the outer symbols as you clearly see are the glyphs given to me by lucifer,they can act as a singular sigil too,each symbol of the spirits will act as an gateway to them and the infernal empire,the inside are the symbols of darkness,and the infernal empire that will act as an gateway to limitless flow of infernal and dark power and energy.

the benefits (in the meditation)
like it is said before,it will open yourself up to deeply communicate and connect with the infernal power and authorities
better visual and physic senses like clairyonce
echanted physic senses
higher states of being
more personal power,as the infernal vibration is great for killing weakness
better feeling spirits and energies
and the list goes so on.

Well done, that is beautifully done, should produce way more power, because of its perfect geometry, flow of energy is now more intense, good to see your taking more interest.

I’m super excited about the Infernal Star and would like to see and read more experiences with the infernal star.

This is exactly what I was hoping for. Looks great!

Love it. Can I print this please?