Many people here have anecdotally noted that demons and other entities sometimes drain power from electronic devices. Somehow, these entities are managing to directly draw power out of lithium batteries, which in and of itself I find mind-blowing.

This gave me an idea for a simple experiment to prove once and for all that entities objectively exist. What if I offered a fully charged external lithium battery to a specific spirit and explicitly asked that spirit to take power from it? Would that work, or does the battery need to form a complete circuit by being plugged into something?

As is always the case in science, this experiment must be designed with proper controls and 3+ replicates per condition. The two comparisons I can think of are:

The test measure could be Δ%Battery (i.e. change in percentage charged), which is a numerical value that could be used in a simple t-test. If offering the battery correlates with a greater Δ%Battery value, this would be strong evidence that the entity to whom the battery is offered can objectively influence/interact with the local environment.

What are your thoughts? Are there pitfalls to this approach? What would be the best comparison to make? Does battery type matter? Is battery draining reliable if intentionally offered, or has that even been tried before?

Looking forward to getting some input.

I have heard they can be reached through electricity before and i have seen spirits Communicating through EMP devices, so i guess yeah you could give it a try
If you have a strong relationship with a demon you have been working on you could ask that if this is possible and whether the spirits agree with it

I was hoping they could recharge batteries without them going bad.

I haven’t put much thought into battery stuff before, even though i have witnessed spirits drain them before. A thing i wonder is if a spirit draining a battery could help them manifest since they are gaining energy from the battery.

Interesting idea, maybe you could engrave a sigil on a disk of copper (or just use a Sharpie to keep the structure of the disk intact?), charge/open that sigil, and then attach the disk in a very simple circuit (making sure not to shock yourself or blow the battery up!), and make a perfectly identical circuit with NO sigil on the copper disk as your control.

maybe you could engrave a sigil on a disk of copper

Interesting, I like it! Perhaps a simple LED circuit where the outcome measure would be brightness. If the entity succeeds in drawing off power from the circuit, the LED will decrease in brightness. Something like this: 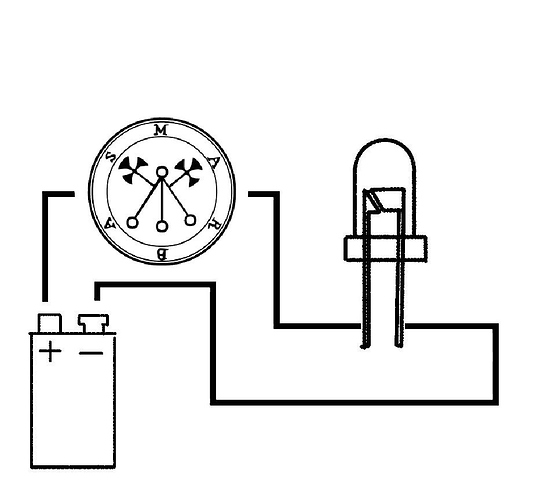 Do you think the observed difference in brightness would be clearly visible by eye? If not, objective measurement is possible with a simple dark box and camera with locked settings, but that’d be a bigger project.

Do you think the observed difference in brightness would be clearly visible by eye?

Some time might have to pass for that to happen.

I’m thinking one battery would die sooner than the other, if the evocation had any effect. It might have to be filmed, I’m trying to think of shortcuts but nothing comes to mind.

Why don’t you try to measure the current with an amp reader? I forget what the device is called

If the entity is really taking power from the battery, then surely the readings will differ from a control which is still connected like the circuit you set up above?

Then again, in the book The Magus of Java, they do a similar experiment with the actual Magus but could not get a reading on what he is outputting to make the LED light up. So its proposed whatever spiritual energy they are using to cause such electrical inferences is not pure electricity but something else with a magnetic influence. idk though. xD

Regardless of results it will be interesting and fun.