Hey buds. So i have this talisman/ necklace. As you can see its a tilted inverted pentagram with a snake going down. I know snakes are healing, self transformation, evolution, kundalini, etc. But ive tried researching the symbolism of the inverted pentagram but its littered with Xtian thought and “evil”. Afaik it has to do with carnal desire and manifesting to the earth. Am i right? Thank you for your time. 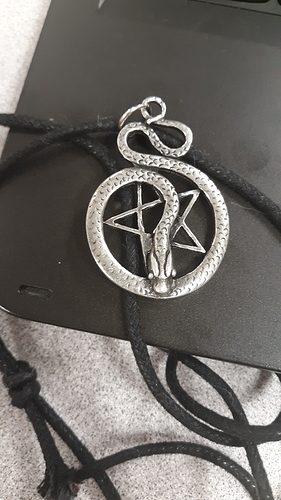 In a nutshell yeah, most spiritual paths concur the pentagram symbolizes the five ancient elements of creation. Water, air, and fire on the four lower points; and spirit on the topmost point. meaning material things are subject to spirit, (which is true.)

So, many think the inverted pentagram is a symbol of evil because it presented an inversion of the natural order, placing matter over the spirit world.

I don’t believe that’s the case at all, i feel it’s reaffirming that original idea, the real argument about it seems to stem from the fact most spiritual paths including some LHP practises, (they can deny it all they like, they know it’s true) feel the highest aspiration a person can accomplish is getting away from material matter entirely, go back to source, become one with the force, return to the garden of eden before the fall…Blah blah blah, samething however it’s phrased.

The meaning of the inverted pentagram is to remind us all that the purpose is to bring all of source/spirit here so that humanity will one day be truly transcendent here and now in the flesh, A.K.A. Become A Living God.

But that’s just a UPG (unverified personal gnosis) I could be wrong…But I’m not.

I think i know what ill enchant it for thank you

Hiya OP! To me, this reads as ‘rebirth from the stars unto the earth’, ‘carnal creativity’, and generally invocation in general- transformation from spirit to matter. Pretty neat!

They claim it represents new beginnings and rebirth, but then again, white-light wiccans assign all kinds of silly meanings to things. 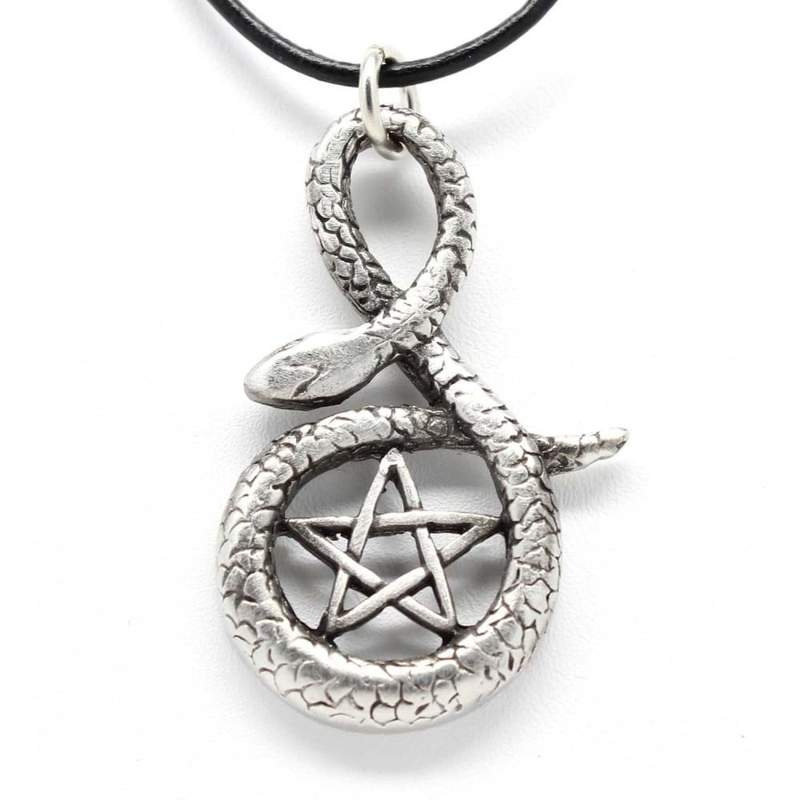 Hiya! The fact that the snake is making a figure 8 around an upward-pointing pentagram, IME, means it is conducive to spiritual rebirth and the ‘shedding of skins’, AKA shedding of spirits. In a rare turn of events, I’d have to agree with the description’s interpretation!

this reads as ‘rebirth from the stars unto the earth’, ‘carnal creativity

That would explain why i was so drawn to it… im in the middle of a ending phase right now too. Looks like my mind is speaking!

I can definitely enchant it for what i want to enchant it.
So with the spirit into matter part, would it make sense to use it for godform work? Or something else? I.e. Godform and human becoming one or something along those lines?