I hope everyone is having a good day.

I came here to describe my Full Moon Ritual and, as part of the deal I made with the entities I worked with that night, I talk about them, encourage you to work with them and give them praise.

These is an overview of all the rituals I made that night, starting at 02:40 AM approximately. Most of the rituals are taken from V.K Jehannum’s website and I’ll leave links so that you can visit thmem youself. I chose these rituals because of their simplicity and lack of materials needed and I used candles and inciense that I had previously bought. The Full Moon gave me a strong period of time where my energy was strongly purified and my daily rutine was greatly affected and changed. 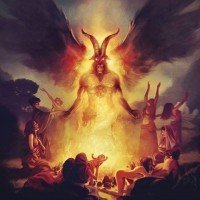 The Rite of Solidification

{This rite serves serves to remove or diminish the traits of insecurity, self-doubt, and submissiveness and fill the sorcerer with confidence, determination, and assertiveness. It calls upon Lilith…

A Rite to Azazel and Lucifer

3-The rite of Infernal Vampyrism

The Rite of Infernal Vampyrism

{This ritual calls upon three Qliphothic archdemons who specialize in psychic vampyrism to improve the celebrant’s ability to digest energy, improve hand-eye coordination, improve the talent of per…

Rite to Lilith and Hecate

{This ritual presences Qliphothic energy and calls the four elements in the names of Lilith and Hecate. The witch is required to imbibe some beverage at a certain point of the ritual, whether it…

The Undead Gods (With Chants and Sigil)

The Undead Gods are a group of earth-bound wraiths who practiced the art of psychic vampyrism in conjunction with some other form of witchcraft in their physical lives prior to ascent. Every Undead…

The Ritual of the Lover

.This ritual calls upon the Six Regents of Hell to assist in the celebrant’s summoning of nine demonic entities. The purpose of this rite is to engender the arousal of epiphanies regarding love, se…

7-Road Opening Spell with the Prince Seere (I had previously drawn his sigil while chanting his “Enn” and I gave him some of my blood as an offering. I wrote down my petitions behind the sigil.

8- Invocation of Amducious (I had previously drawn his sigil while chanting his “Enn” and I gave him some of my blood as an offering. I wrote down my petitions behind the sigil.

{This ritual uses Enochian script, well-known chants from Traditional Demonolatry, a chant from Book of Belial, and several magickal chants of my own invention to bring the celebrant to unity with …

9-Invocation of Zepar (Customized. I had previously drawn his sigil while chanting his “Enn” and I gave him some of my blood, sexual energy and sperm as an offering. I wrote down my petitions behind the sigil)

1-This ritual is very simple but I’ve started noticing subtle changes in myself. I’m still expecting more changes and I know that I have to be patient to experience the full extent of the results.
I have to say also that I’ve had many dreams concerning Lilith the days prior to the Full Moon and posterior ot it. I’ve also seen images of Lilith in my mind when I’m clase to astrally project. This makes me wonder if I should start my initiaion in the Qlippoth of Gamaliel. I’ve also had severel dreams referring to Moloch.

2-Same subtle changes, but I’m still waiting to experience the full extent of the results.

3-Same subtle changes, but I’m still waiting to experience the full extent of the results. I haven’t got the chance to use Psychic Vampyrism also; something I need to work on.

4-Same subtle changes, maybe more than the other rituals. I used white wine for this ritual because I can’t stand it and it felt appropiate.

5-I certanly felt a certain presence in the room, but I only summoned them to be in my life, not to ask them for anything in particular.

6-Changes are starting to appear, such as people looking at me in the streets and people falling inmmediately in love with me or showing sexul interest when they meet me. I know this because my intuition is execptionally good and I’m able to read other people’s thoughts sometimes. I’ve always been a handsome, charming and seductive person, but things are starting to look even better.

7-I’ve had minor experiences with Seere in the past. I participated in a ritual that Orlee Steward did some time ago (https://www.youtube.com/watch?v=oX-iOaZCYrU) and I haven’t found a treasure yet, even though I know I’m getting it and that I have to be patient.
Seere also appeared to me in a dream and he asked me to walk in the street with two incense sticks in my hands and sit down in the places he showed me. I did what he asked for and people looked at me in strange ways, but I really didn’t mind.
I asked Seere to help me find a treasure, to clear any barrier whether they are mental or physical, related to money, to find something I had lost some time ago, to help me in a job opportunity a have, and to see clearly in which areas is good for me to invest money on.
Results came quick. Extremely quick. The next day I noticed that some money that I had invested some time ago I had forgotten about it went from 75.000 to 500.000. There were also other changes according to money in my life, but I won’t talk about them since they are of a more personal nature. I have to go to the job interview yet, but I know Seere will help me.

8-I asked Amducious to feel no regret nor shame nor fear, to canalize my emotions, defense against magickal enemies and good fortune in aspects of money and gambling.
I have to admit that I had already destroyed the concepts of regret, shame or fear from me (unless it was something challenging or new or in a ritual whose entity was terrifying for me at first) and that I had to clear undertanding on how to canalize my emotions, but I still found some great results from Amducious, results that I know that will improve over time. I haven’t got the chance to test my luck in gambling.

9-Zepar in more of a friend to me. The first time I heard of him was in a “Praise to Zepar” video and I immediately felt drawn to him. I was young at the time and love spells where common at the time, so Zepar seemed to me like a perfect choice. I didn’t know muh of the Goetia at the time, so I recited his Enn over a red candle and I didn’t see or felt much, so I become quickly frustrated and abandoned the project, but I promised myself to work with Zepar one day.
Time passed. and after some failed evocations of King Paimon (Which at the end it ended up to be succesfull) I dediced to work with Zepar again on the night of the Full Moon. I felt that sexual energy would be an appropaite offering to him as well as sperm that I left in his sigil. I had previously had a dream about Zepar where he took me to a mountain and said that he was my friend.
I asked Zepar to increase my sexual magnetism for both male and female, improves seduction skills and destruction of mentals barriers that I had about sex.
As I said before, I’ve always had a stron sexual magnetism and sexual and seductive power, but I’ve started to see results little by little and I known that they will increase.

That is all. I’m really really grateful for the things that these entities have done for me and I look forward to work with them more, and I encourage you to do with same.

Thank you for your contribution of this post and to this page.

I did some of those rituals you did too … Among others