I wanted to share my thoughts on a runic divination method known as the square of nine I found recently as somewhat of a review. I stumbled on this method while seeking a visual reference I liked for Elder Futhark on Google’s Image search and decided I’d give it a go as I had a past/present/future style question I wanted to ask. The blogpost that was the source of the layout can be found here: http://whispersofyggdrasil.blogspot.com/2012/06/divination-with-runes-square-of-nine.html

Me being me, I also did my own spin on it and pulled out my Tarot instead of the runes as many of these formats I have noticed will translate quite well.

What intrigued me the most is that it detailed all three stages from the querant’s perspective, as things actually were, and outside forces affecting things (which seemed to respond well to being guided to focus on a specific person in my usage).

Overall, the read was good. Past and present laid out as I expected for my perspective and reality and the rest gave insight that cleared up and/or confirmed some bits of gnosis surrounding the question.

Sorry for lacking details on the read as it is still a bit personal. If I do another of these, I’ll ask something less sensitive to base a review on be it another read with this format actually using my runes or another layout. 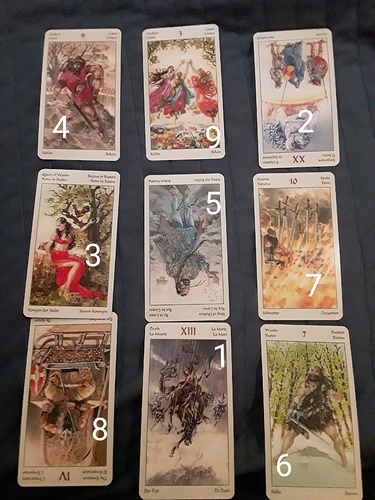 Ok, so I did another Tarot read using it and though I was asking specifically about working with Loki, it kinda reinforced my previous read in both the working of this layout as well as the previous question asked given the person is closely tied to him.

So right off the bat it’s fun as #1 is Death. Recent past was a beginning of a “get serious” moment for my working and I had to dig in and get more committed in general to moving forward.

#2 Judgement, Ragnarok, inverted. My personal feelings will be that I achieved the growth I sought and the transition to finding myself will be complete.

#3 Queen of Wands. Could mean that I unexpectedly run into Loki’s disciple soon or at least that they are doing better than when I last saw them. Possibly both.

#4 Nine of Chalices. Outside forces will bring some form of cheerfulness or satisfaction to me. I have some ideas on the details, but that delves into the personal from my last read.

#5 King of Chalices inverted. I had been procrastinating on some things recently and haven’t been busy as a result in my workings or my work.

#6 Seven of Wands. Following on from #1, I was feeling like I didn’t know whether some of my workings were successful or if another sorceror in my house was the cause of what was happening, this led me to be more proactive on checking with him when it appeared I had success to ask if he had done anything that should’ve been affecting me at that time and seeing my work for what it was.

#7 Ten of Swords. My feelings most recently of perhaps being punished for my procrastination #5 alluded to.

#8 The Emperor inverted. Ullr shows me that the disciple of Loki, likely not intentionally, was influencing me away from what I needed to become.

#9 Three of Chalices. Gerdr, Freya, and Idunn celebrate as they indicate everything will conclude happily.