Did you get the outcome? That’s the important question here

I can’t help you with your question the only spirits with tentacles I know of are cthulu mythos ones. Can you hear spirits? If yes then ask them directly. plan b is ouija to get them to spell it out. Not the most practical solution, definitely not long term.
Go to YouTube and check for blue ray meditation. I got great results from that to communicate with spirits.

Look into Cthulhu and the lovecraftian lore

I didn’t get the result and I can hear spirits but not consistently. I will try the Ouija. Thank you

I just looked at video regarding the spirit you mentioned and that’s was him. I will look into him more. Thank you

If you just called out to anything that happened to be listening, you might be in for a wild ride.
I did the exact same thing once and it bit me on the ass. HARD!
I will only do Targeted evocations and invocations now.

So this brings up another question for me. Cthulhu is supposed to be a story created by someone. Could it be that he came to me because he has always been real or could it be due to the power that has been given thorugh creating the lore?

I have heard some here mention Volac for lotto work.

@MatthewANew S ben Qayin believes that HP Lovecraft was approached by Cthulhu in his dreams and wrote stories based on those dreams.

So this brings up another question for me. Cthulhu is supposed to be a story created by someone. Could it be that he came to me because he has always been real or could it be due to the power that has been given thorugh creating the lore?

Everything can be evoked. It doesn’t matter what it is. If you can think it, it can be evoked. Also, he has a lot of power, take it from the guy who’s main path (at the moment) is Lovecraftian.[quote=“Paulden, post:9, topic:21800”]
It appeared like Cthulhu. Doesn’t mean it’s Cthulhu
[/quote]

Wow that’s very interesting! I really need to learn more about evocation, spirits and such. I think that I have just a tad bit too much fear going on to be highly effective. I am soooo grateful for everyone’s input and advice. This is definitely going to help me in my journey. Thank you

I’ve actually recently experienced an encounter with one of these entities myself during a spirit journey, glad I could find this thread when I did. Maybe this will be of some help to you… I was shifting through dimensions through a technique I recently acquired, so I didn’t get a long look, but long enough to see it clearly. While sitting in the astral plane, I saw a shift in the patterns on the wall, which I thought was normal since the geometric patterns in a space would appear throughout, but this was different. While doing shrooms on a previous occasion, me and a friend both experienced what we called “tendrils,” tentacle type things only visible in a prismatic way that rooted themselves into our minds, gave us a feeling of being more “in tune” spiritually, which my friend expressed doubts about. Now remember, this was before my spirit journey, which was worlds more intense. Back to the geometric pattern change during this spirit journey. The walls had an appearance like a shattered mirror, triangular wedges building up the space to my right, which was consistent up until the point where I saw the wall in front of me. There was an edge to the pattern, where a second, different pattern was blanketing the walls and ceiling into the next room to my left. I followed the pattern, which was prismatic, tubular and elongated, stretched tight against every surface. They were tendrils, I could recognize these from my previous trips… But usually they were cloaked, blended into the world like a vitreol eye floater, but this time the tendrils were prismatic and vibrantly visible. I kept following the tendrils to their source, until my eyes settled on a being that stood in the next room. These tendrils wrapped around the fromt of its body, the face, chest and arms covered in front by a mass of these tendrils. As I kept staring at it, I guess I took it somewhat by surprise, because upon seeing me look upon it, that’s when it happened. It leapt against the ceiling, suspended by these tendrils, its form now fully squid-like. It looked right at me, jumping from space to space, checking if I could still see it. At its center mass, there was a space I knew its face would exist, but the space was void… remember that this thing had taken a prismatic effect, and that it was fully colored with a psychadelic pallor of color… but even with that, the space where a face would exist was lacking in color. I was with a friend at the time, who was sitting next to me, and after our trip we related our experiences to each other. Here’s what happened to him… he was focused on the space to his right shortly after I spotted this thing, which was to my left. He felt a presence, felt that it treated him as if he was in the way, and it began to consume off of his energy. He never saw this thing, but it happened at the same exact time I saw the squid. Later, we both suspected this thing was familiar, so we did a bit of research, and eventually I found a page on “Astral squids.” The description fit this thing perfectly, which was eerie since it took a bit of doing to find this page on a spirit forum, and it described something I didn’t know, but had already seen. Some people relate their encounters with them on the astral plane, describing them as manipulative, energy-feeding parasites, some tear open the flesh of the astral self to create more portals for them to enter through… they’re regarded as extremely powerful, but also very hard to get rid of. For example, I’ve read threads saying that they would enter through a portal, usually opened by another source, a leader or “queen” if you will. They’d hide in a space parallel to ours in its own private dimension, which is where I surprised it. If one were to banish it, throw it back through its portal, and finally feel peace from it disappearing, they all say they’d turn around and it’d be right there. But at the same time, I feel like this “parasite” label could be an oversimplification. My encounter with it was in no way harmful, but perhaps it was to my friend… ? Maybe it isn’t even attached to me, but him, or maybe even both of us…? Either way… this was an interdimensional being, and I’m sure that it first took its place when I took shrooms with my friend, but seeing it clear as day on its own turf, fully visible, then finding out what it was the next day… it was unreal. Be careful what kind of deals you make, be extremely clear about the terms and the desired outcome.

Omg, i dreamd of a big tentacle sucked me in, i wasn t afraid, but it woke me up… so since i m not that advanced with these things ( or english lol, sry, hope you cand understand me ) i can only hear diferent entities, when i m in a very relaxed mode… so i was curious about what i dreamed about… but i saw the begining of your story, about the lotery, and i remembered that i indeed wanted to win the lotery. This is shocking to me. I m glad that i saw your post

Welcome @Anda It is a rule of this forum for all new members to properly introduce themselves, so please click the link below and tell us about yourself and any experience you may have in magick ie what you practice, how long you have practiced, areas of interest, etc:

Probably a thought form given power since a lot of people believe him and the Ancient ones to exist. But really who knows. I’d like to think it’s just fiction.

Thank you so much for your response on this. These are definitely the beings that I’ve been experiencing. I’ve encountered a ton of other type of beings since I posted this but now I can see that these are the main ones that have been interacting with me. It’s like my journey has brought me back around to them.

I have realized though that they’ve been interacting with me since I was a child, causing me pain and to overthink things. They do a ton of tricky things but they aren’t basic parasites they present as very intelligent and manipulative at the same time there is something there seems to be an aspect of them that’s simple. I feel them stabbing me all over at times, they talk endlessly, the cause problems with memory and have sent pretty harsh energie, amount other thing.

Has anyone found out how to become free of them?

The entity you describe sounds like something I’ve experience before. They sound like one of those astral parasite(squid/tentacle type), these guys are slightly intelligent/cunning and might even lie when you ask them questions(It lied to me that it was an ubi). However, over time they drain you(hence the constant tingling left hand sensation), and you might find your self sleeping more and more, accompanied with hazy memories and your usual parasite symptoms.

They are moderately hard to remove but it shouldn’t be a problem if you know some kind of banishing ritual.

They should look something like this or give off this feeling, although the one that was attached to me had more tentacles and was black and white: 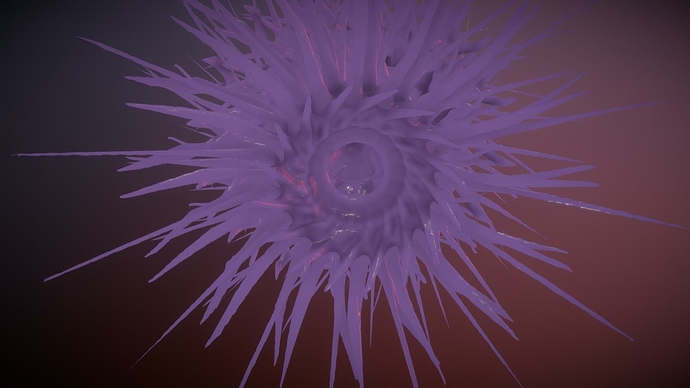 Sorry for double posting, but this method worked pretty well for me. You could give it a try, just blast it off with some intense energy, I disintegrate mine into dust. Always remember your energy is yours and no one else can take it if you don’t allow it.

This is my technique of dealing with minor parasite spirits. The usual recommendations are to banish or starve them, which is certainly advisable for anyone uncomfortable with what I am suggesting and works very well. There is a great thread on the subject I will share down below: Personally, I prefer to turn the tables on things placed in my path to hinder me. Parasites achieve nothing but draining energy from a target, which can be effective for dealing with an enemy if a thought form is cr…

Thank you very much Reyes! I will certainly try this method. I know I have at least 3 attacked to me and they are pretty big. Seems like I may also be having an issue where when I notice an entity they come right to me and try me in my body.