I purchased this republished version when I first became interested in magick. I know very little about Jochum Magnús Eggertsson, also known as “Skuggi” or “Shadow,” if you will.
I know what he claims himself to be but does anyone else have more insight into his works, life, or validity as a sorcerer? 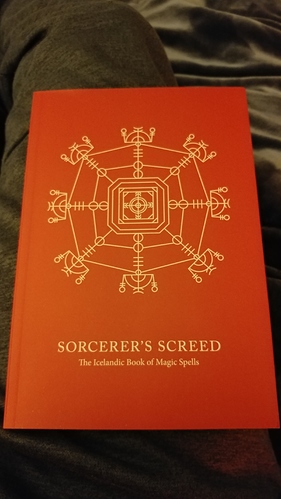 No I currently have not tried to utilize anything in this book.

Traditional rune staves are way simpler than the one on the cover. Maybe he’s doing his own thing though, adapting and taking it further, I don’t know. Look up the actual historical staves (the government of Iceland has a website that shows a lot of them, plus you can see quite a few just by casually searching on google or Pinterest) and see if they, or things very like them, show up in the book.

A lot of the later Scandinavian stuff (middle-ages era) ends up being a kind of mix between traditional and demonic, so there might be some references to that as well. So, if there is, there’s actually a bit of a tradition to back it up, not sure how effective it is though.

This book is a mix of Germanic paganism, Catholic rituals, and superstition for sure.
I do know quite a bit about traditional staves. Often when you look them up online you will not usually see how to charge them which he does go into a bit of.
He claims it is a book of white magick but there are multiple rituals I would call Necromancy for sure.
The book is well done but it is based on Skuggi’s notes so a lot of it makes no sense at all or will tell you how to charge the spell but not tell you what it does.

Yeah, there’s a HEAVY necromancy lean in the book. I wouldn’t say very much is white magic at all. The book is cool…but really much of the staves in it aren’t that practical for much in present day situations. Like…how to stop a horse thief. etc. I have, though, used two of the staves in it with success.

Spells for keeping sheep calm, stopping horse thieves, and of all things… Casting curses on the fox terrorising your farm is impractical today.
Strange things like carving on a Rowan post an striking a rock or hillside to make it open. What does that even mean?
Im glad to hear someone else read the book and found some success though.

Yeah…some items are inaccesible to most for doing the spells. Its still a need book though.