Soni went to the graveyard to do some community service

Not necromancy really, but i think i share the story anyay.
So I vent to the graveyard to do some community service, and maybe take some pictures.
It got to around 5AM or a little bit more before I got there.
Long day at work.
Silent morning, was dimmy just before I got there, now rainy, the small drop small amount rain. Not cold either.
Silence was abrupt by the high pitch squeal from a scooter.
Revving and braking hard, was a guy with a girl on, think they had one helmet.
I just observe them going past some way ahead, they never see me.
They park down by the end of the fence to the fence to the graveyard.
On their way up, the guys spots me.
I am a pretty big guy, wearing a et black jacket, black hoodie, and some dark color woodland cams like pants.
The guy freezes on the spot, he got scared as hell.
I commend him on the loud entrance, and he starts talking about that he worked there before and such.
I ask if they are there to steal skulls, and he says no no.
I tell him I am.
He believes me and so does his girlfriend.
Tell them its a joke, and I assure them I have good intentions, just wanna find peace, and the grave for the two boys.
The other day I was there, and saw this really old gravestone.
I did some work to find out how and who could fix the stone and rise it.
It is a beautiful white marble stone with some red in it.
Two boys is buried there, 4 and 2 years old.
I immediately felt something for these boys.
So today I went to rinse their gravestone, and put it back to its glory, and I couldn’t find it.
I was around everywhere.
They started to make sounds around the graveyard.
Like little strange sounds, that you just know its someone.
Sounded like kids.
I even heard a little boo!
They taunted me because I couldn’t find them, in a fun way.
Sounds came from right side, so far up behind me left side.
I tell them that they are too good at hiding.
I was like 5 times all around the graveyard.
Nowhere to be found.
They know everyone there, the dead and all the animals.
Sadly I had to give up, because it was now getting so early I could run into church-goers and priests and so on.
One of the boys got really sad when I was about to go, I promised him I would come back, and be like their a little bit crazy big-brother.

For those of you that bothered to read it, i took some pictures i can share. Just looked through all the pictures, and i think i found them hiding on one of the pictures.
There is a couple of another anomalies. The round sphere and the guy with the green head (or hiding head)
Inputs ? 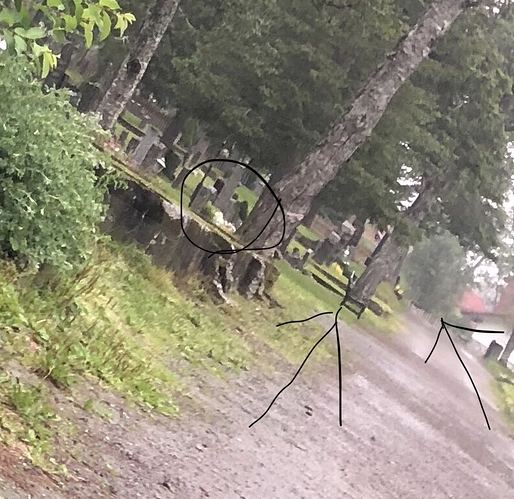 I wonder, if you were to bring a small toy as a gift, if you might be able to find the grave easily? I see this a lot in the graveyards near me; small children’s toys left on their graves. I am convinced there is more to it than sentimentality.

A sad story, though. It is kind of you to play hide and seek with them.

That is a great tip.
I will try that for sure.

Very busy graveyard Indeed! Have you heard any story about a guy who was hanged in that graveyard?

I didnt, but suicide rates are high, and they tend to hush down such things. It woldnt surprise me if someone did thou. I have at least two friends that hung themselfs. I ha e to ask the right people to get a straight answer on that thou.