I’m very interested in the Theta-Gamma Sync, and I’ve seen some questioning out there about E.A.'s science behind his label/description. I wondered about it myself, honestly, assuming in my ignorance that the brain could only operate at a single frequency at any given time. As usual, I came across some stuff related to it (coincidence? probably not!) while I was looking into other stuff, namely Near Death Experience phenomena.

I was reading this article at: http://io9.com/a-new-scientific-explanation-for-near-death-experiences-1110395345

And there was this very interesting paragraph:

“Finally, the researchers saw cross-frequency coupling — where different electrical waves work together — in the rats’ brains after cardiac arrest. They found coupling between low-frequency gamma waves and theta waves, as well as low-gamma waves with alpha waves. When theta waves couple with gamma waves, it represents a conscious control of the brain. Alpha-gamma coupling, on the other hand, is a feature of visual activation or visual awareness, which includes internal visualization (imagination) — Borjigin suggests this particular brain activity could be behind the bright lights some people see during their near-death experience.”

It made me wonder many things, but mainly if the flashing E.A. describes, and which I recently experienced myself (and am driven to replicate) wasn’t actually alpha-gamma coupling. For myself, I could control the flashing by drifting almost back to sleep, and could stop the flashing by almost bringing myself to being fully awake. Without hooking my brain up to EEG, I guess it’s a guess. Just throwing the hypothesis out there. However, to play devil’s advocate here, theta is the state of deep relaxation seen in experienced meditators, so I may be totally off here. I can get myself to the what E.A. calls the rapture, but I’ve never seen the flashing in that state. shrug

Also, have any of you experienced this flashing? If you have, I would ask you to share. I’m curious if the characteristics are the same or nearly so for everyone.

For myself, I can describe it as akin to the light from a blinking sign that doesn’t vary in intervals between blinks. The light had no visible source, and could be compared to the intensity of a low wattage bulb in a common house lamp. The intervals of blinking occurred maybe every second. Light on one second, light gone one second, repeat. I experienced this in a room that was somewhat lit by the rising morning sun, yet the effect was still very striking.

In any case, a google search of ‘cross-frequency coupling’ led to some interesting articles, such as this bit from here: http://neurodynamicslab.neurology.pediatrics.med.ufl.edu/research/cross-frequency-coupling/

"Recent studies have demonstrated that oscillations in these frequency bands (delta, theta, alpha, beta, gamma) occur simultaneously and can interact with each other. In one such type of cross frequency coupling (CFC), the phase of low frequency rhythm modulates the amplitude of higher-frequency oscillations. This type of CFC is called phase-amplitude CFC and the best-known example occurs in the rodent hippocampus between the theta phase and gamma amplitude. Phase-amplitude CFC has been implicated in cognitive processes including both working memory and long-term spatial memory. The link of CFC with learning and memory is further strengthened by experimental protocols for the induction of synaptic plasticity. For example, the most common experimental protocol for long-term potentiation (LTP) include the use of high-frequency (~100 Hz) burst of six to seven stimulations repeated at a slower rate (3-5 Hz). This pattern corresponds to high gamma burst recurring at theta rate suggesting the possibility that synaptic plasticity protocols might be tapping into the naturally occurring process of theta-high gamma phase-amplitude CFC to regulate synaptic strength.

These findings have led credence to the idea that phase-amplitude CFC may be the most predictive neurophysiological marker for cognition yet found."

Fascinating, indeed! And I’ve only made a casual perusal of the subject so far. Would be interesting to hook yourself up to EEG and measure the couplings exactly. Someone should try it (like E.A.)!

Anyway, it seems (imo) that E.A. named it aptly, and was completely justified in naming it what he did.

Now if only I could get there…

Hi, I’ve been playing with EEG (using Muse) and HRV (heart rate variation using HeartMath) for a couple of months and get some interesting results. They seem to be independent for one. Secondly I can get into a state where 8 and 10 Hz show up quite clearly (see pic) 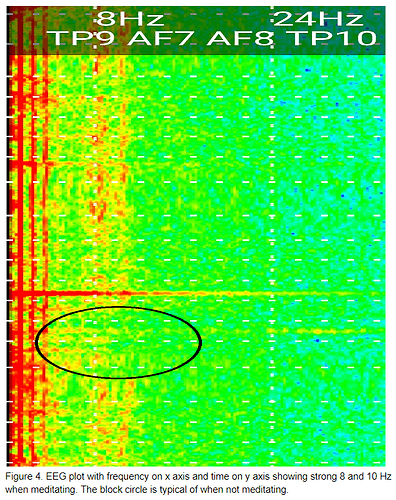 8and10Hz.png604×762 648 KB
which are not there when I’m not in that state. Interested to hear if anyone has been measuring EEG or HRV with static rain. Cheers.
1 Like