Does anyone here dream about snakes all the time? I have a snake dream at least 3 times a week and I’m beginning to feel like I’m missing the point my subconscious is trying to commune with me. Sometimes I get bit and sometimes I don’t the dreams are never the same. I am aware that I have to look out for venomous situations and I’m on the verge of spiritual transformation by epic proportions but I can’t help but feel that I’m missing something here. Anyone here experience these types of dreams and what do you gather from having them?

I can only think of Kundalini.

That can have many meanings, transition, change (shedding skin), wisdom, knowledge, the forbidden (serpent in the garden allegory). It can also point to an enemy or fear of death either physical or ego death. I’d depends on the context of the dream to really provide insight into it.

For those years I would dream about snakes in different conetxt, always lucid dreaming tho.

I also dreamt with people that had snakes, I dreamt about my Grandpa’s house, and old room in the backyard that was all crappy, there was a guy, kind of like a bearded homeless guy full of snakes, they were appearing from his hands and the floor was full of them and he was like “Come here!”.

The last snake related dream I had was last year around november, there was his weird world and this bad guy that had a -and this is pretty bizzarre- head of a green apple. He had a huge head with small face, it was a big green apple and he dressed like Al Capone, with the hat and everything.

In that dream I fought against that magician and opened a bank that was full of snakes, not money, but snakes.

I have read in the Ars Goetia that Volac can give snakes to the magician… what the fuck does that means?

Next time, don’t. Report what happens. I’m interested. If it’s hostile, eat it.

So I’m not the only one seeing that Apple guy after combat dreams?

Have you seen that apple guy?? man it was bizarre, it reminded me to some magritte’s paintings, you know because of the green apple, just so big head and weird face.

I even want to take him as a character for a novel or something like that. I have seen it just one thing, that I remember.

I recently dreamed of myself in combat with some weird apparitions. Thought it was nothing.

Then I go through a door, and there’s Apple Man (coining that, by the by).

I run him through, and tada! Dream ends.

A good website that I use to assist in dream interpretation is dreammoods.com. There’s a section in the dream dictionary on snakes. One of the major interpretations is of a sexual, often forbidden, nature with the snake being a phallic symbol. Of course, dream dictionaries are only used as a supplement or a baseline of interpretation for me, because I know that the person who dreams the dream is always the most qualified to make sense of it as it applies to their own life.

One way to interpret dreams that provides good results for me is to notice the emotional content and how it changes in the dream. Then look through your life for situations that embody those same feelings and emotions for you. It’s based on one application of Philosophical Midwifery promoted by Pierre Grimes. I have found it more useful than any other method of dream interpretation yet, for me.

Old topic but I also decided to chime in because this is crazy. I have snake dreams all the freakin time. Literally several a month and I have never tried to associate a meaning with them because it never occurred to me that they could have meaning. I honestly just thought I was having nightmares because when I have these dreams, I am always getting bitten, struck at, or seeing a snake and just before it has the chance to bite me and I grab it and try to hold it’s mouth shut with my tiny hands, feeling it slowly overcoming me and screaming out “can someone take this snake from me or quick, give me something to toss it in? it’s about to overpower my tiny hand with it’s strong jaw and get loose, and it’s gonna sink into my hand with it’s fangs when it does!”

I usually wake up right after it bites me or right before it does. Every time I have this dream, the type of snake, it’s size, it’s color, always varies and the location I’m in does too. I have always had snake dreams since I was a child because of…never mind some horrifying real life experiences I had and it’s 2:04 a.m. too close to bed time so…gonna shut the hell up about snakes. I noticed these dreams became more frequently after seeing that darn Samuel L. Jackson movie, so I truly just thought these were nightmares but they are recurring too often now.

Once when i ventured into my thoughts, sort of like meditating - i found myself thinking about this snake in a watery cavern, the snake was blue cobra and it was spitting crystals to my vision.

Snakes, in the mother fucking astral plane. ///all planes.

I recently answered this question on quora. Here is the link just for verification https://www.quora.com/Why-do-I-always-dream-about-snake/answer/Peter-Son-49

Instead of writing the whole thing again I would simply copy paste it. Hope it sound fair.

Hey Thanks for Asking!

Many people think that dreams are just “dreams” and nothing else. Like, they occur due to what we think in the day blah blah, but in reality they have a meaning.

They have some meaning that’s made you think what they can mean, and I think that’s why you posted here. Now, let me begin with the statement that every dream is unique so its specific interpretation most probably will be different.

Generally, always dreaming of a snake means you are ignoring something important in your life that you must be doing. The snakes in your dreams are constantly reminding you to do what you should.

I just had a dream not a few days ago that I turned into one and became intertwined in an upwards direction with another snake. 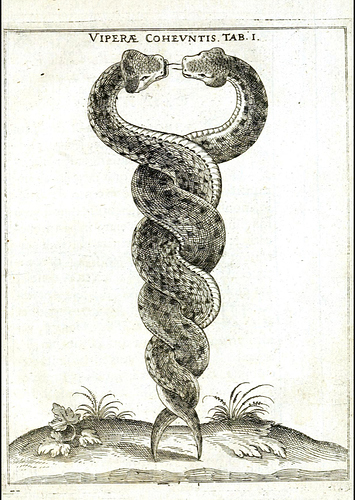 I then woke up to a thrusting sensation on my groin followed by seeing a sea of red with neurons connecting to each other by the thousands.

Recently i too had a snake dream. It was in my house it was a big black snake and it saw me then turned blue and white (colors together) and chased me at like lightning speed and i ran away and it caught up and bit me on the leg and disappeared

It means you have some known people in your life who looks like they are your friend or your well-wishers, but they will deceive you!

Welcome @peterson I see you joined us back in December but have not yet introduced yourself. It is a rule of this forum for all new members to do a proper introduction, so please click the link below and tell us about yourself and any experience you have in magick ie what you practice, how long you have practiced, areas of interest, etc:

Failure to do a proper introduction will result in the removal of your posts until our rule is respected.