I was just thinking about arguing the Chrisuan Church establishment is not vacuuming the life savings from people.
Then thought of Joel Osteen, and people appalled at his riches, who then take a Marxist viewpoint on his wealth.
Where did you think the offerings go?
How many of you have written cheesy feel good books or held worship rallies in a town square with an offering plate?

Tbh, I think the money goes to Israel or to charity or something. Besides funding mega churches to collect more money… lol

I here the catholic church is the richest organize religion money can buy.
Long, long ago, as a young man I began to question the religious teachings I Began to question everything upon my discharge from the military. Way too many contradictions between what was impressed, view points from the pulpit. Never what was really written. All aimed at making folks feel inferior, going to hell, and my favorite one, Must Be Gods Will when folks get sick, victimized ect. Always passing around the tithes offering plate , then the love plate ect, every Sunday morning, Sunday night and lets not forget the Wednesday night service. Yup , church services, but with a price tag, that must be why they call it Services. The one thing that another man said that really hit home is the following statement.
He asked me this question, What is the difference between the church of today and the church of yesterday? I replied that I do not know. This man said, The Church of today offers handicap parking, wheel chair ramps
help you get on the welfare program ect. The church of yesterday offered healing of sickness, restoration of sight, the lame made to walk, the blind to see, fed the poor ect.
Now I am Not preaching here, just making a statement.,
The more I thought about the affairs of organized religion of today, the more I realized that it was all lies, all aimed at taking money from the poor, the ignorant and those like me, brainwashed with the stain of infinite human opinion, to keep folks around, as a cash cow, servants, soldiers to fight their wars while they sit in the comfort of the spoils they obtain.
Then I awoke.
I will not be a servant, or a slave no longer ! I will seek knowledge and rightfully divide the truth for my self.
So my path began, walking between the dark and the light. Indeed the door swings both ways.
I apologize if my rant has offended any one here. Let the spirits themselves speak, for that speaks volumes.

It is on topic.

Then thought of Joel Osteen, and people appalled at his riches

It’s funny to see how upset people get about people making money off of Religious Systems. They made the money because people gave it to them. I think it’s silly to give money to someone on TV reading from a book that I can get for a couple of bucks at a nearby store and read myself but I’ve spent money on plenty of Religious things for myself and paid my share for get togethers and functions for my local community.

I don’t much care for JO he gives me a creepy vibe but it’s not his wealth or how he made it that bothers me as much. The authors of BALG made their money in a similar fashion.

As far as where the money goes: To pay for those big ass buildings. Paying the people who work there. And in the bank accounts of the preachers mostly. I wonder how much the bills for Olsteens church are. What he spends his share on… I’m sure he lives well 🤷 .

And the people criticizing him would probably abbandon their views if they had the same kind of cash on hand. I’d like to think that some people would hold to their values and “share the wealth” if they became millionaires overnight but I don’t think it’s likely that everyone who criticizes the wealthy would keep to their ideas if they became wealthy.

Robin Hood was a crook. Sorry.

That wasn’t a response to the op, it was to v_alex. If you’re responding to me (I got the notification so that’s why I’m doing this)

How many of you have written cheesy feel good books or held worship rallies in a town square with an offering plate?

Not me, maybe I’m be missing out?

Modest request anyone of the “take from the rich” mindset read this: The Science Of Getting Rich (this book is out of copyright and exists in many formats here).

It will give you something you can put into action right away and then see, once you have a little money, how much of it you think should be given away. I tend to support some degree of welfare safety net, so I’m not stating that snarkily. 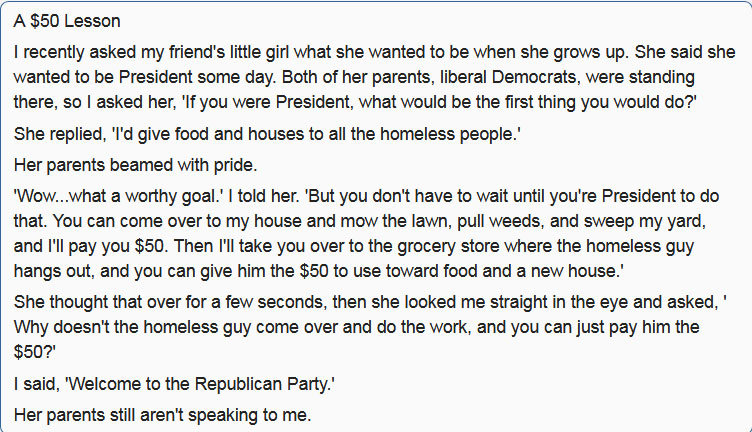 Funny, sad and true at the same time.

Where did you think the offerings go?

Depends of the Christian outlet you are talking about. For the Southern megachurches, it goes to the founder’s mansion estate, cocain, and transvestite prostitute addictions. For the Catholic Church, it goes mostly to lawsuit settlements for sex abuse victims lately (I shit you not, they paid out 249 million US to Australia as the result of a class action suit to sex crime victims recently). For Mormon churches, a great deal of it goes to charities, actually, and the rest is reinvested or divvied up to fund their missionary work. Baptists? Not sure. I think they just spend the money on classes that teach their clergy how to try and scare the shit out of people.

Then there are churches or religious organizations that actually try to do what they feel is the right thing in their own way. Not every Catholic church is full of anointed pederasts, and not every Baptist minister is screaming about damnation and hellfire. The jury is still out on the megachurches, though. Those guys tend to be consistently fucked, IMO.

So,to answer the question, the money goes to wherever it will best further their agenda, same as anyone else, lol. Not all agendas are created equally, I guess.

I will seek knowledge and rightfully divide the truth for my self.

So my path began, walking between the dark and the light. Indeed the door swings both ways.

I apologize if my rant has offended any one here. Let the spirits themselves speak, for that speaks volumes.

No offense taken here, I could not say it better myself.

And the people criticizing him would probably abbandon their views if they had the same kind of cash on hand.

Actually I disagree. There are still well off individuals who throw fistfulls of cash at these guys. I think the common factor is spiritual slumber combined with acceptance of the role as a soulless meat golem. That is not to say that tithing is embraced only by the foolish; it just means that that is the reason why the majority do it.

And why not? It’s their money. Really they are doing you a favor. If you want in on some of that sweet cash then just go to church and see who gives freely. Observe them, talk to them, and learn their psychology. Then figure out something you can offer that holds value in your target market and apply the lessons you learned from the good folks at church. Then people will throw money at you, too, lol.

I wasn’t referring to the people who tithe to his church . I was referring to those that criticize him for being wealthy and what he does with the money he has.

Basically I’m saying that if all the people who criticize people who are wealthy such as JO became millionaires overnight the majority of them would abbandon the principles they hold that are anti-wealth.

I would still disagree. There are plenty of people who gain their fortunes by offering the public something of tangible value without resorting to spiritual predation. The guy is a con man, albeit a legal one. Remember, a con man does not need to break the law to be a con man. Not every person with wealth is a con man.

Do I find it morally repugnant? No. Does the guy have some obvious skills? Sure. Is he a worthless piece of shit who predicates his success on the spiritual suppression and misguidance of those he accepts money from and I just plain do not like the fucking guy? Oh yeah.

Yup, That which is his , is his to do with as he sees fit.

just plain do not like the fucking guy? Oh yeah.

On this we are in total agreement. He gives me the creeps for some reason.

The main issue is, would everyone who came into a lottery winning still view redistribution of wealth as the right thing to do?
Be it Charleston Sheets, Oral Roberts, the local panhandler, etc if they came into high life status, and the average follower did likewise, would they hoard their wealth?

Osteen and.most televangelists are flat out creepy. Even the militant female one, while not creepy she’s church lady creepy … And that’s bad enough.

Be kind to all, but take no man to raise. I herd it said that if you give a man a fish to eat, he will have one meal, but if you teach a man to fish, he will have many meals.