I did just wait for the results, but I had some symptoms, the trance was so strong the saliva came out, I felt many emotions until tears spilled, the seal sometimes disappeared, appeared and the lines s disordered look another point and he saw as the seal I tried to get out of the paper, I made my offering there was silence and ask we have a deal ?, and then a very strong electricity in the back, like a thunderbolt, I guess he said yes, before I was sleeping but it seems that he already knew what What I wanted because when I woke up the first thing that came to my mind was the seal, and I said you do not want it? these are good signs? i made this same post in other category, but is how much time normaly works ? thanks

thanks for reply, i hope works because i want this girl, but for the other side i want know if i can do it a powerfull evocation for pass and another spells, like change reality, i was practice with videos about the move and focus our energy, open the chakras etc, and i forget say something i ask sitri in how much time can i talk with this girl he say 2 day, and when was sleeping i felt sitri talk to me in the ear, but i couldt undertand,maybe the obsession with the result derived from the work I do not know.

i hope works because i want this girl,

look like i said before dont be obesesed for the result, dont over think it … it ruin your work , i know it by the hard way …

i want know if i can do it a powerfull evocation for pass and another spells, like change reality,

haha
just have positive vibrate about your self …

I am in no way an expert but I’ve used sigil magick twice this week. Charged them to a high intensity and then charged Azazels sigil to see the work done. Last night it took one hour for manifestation.

Hi you recomended use the sigil several times ?

O right work with the same sigil thanks for reply:)

I used Azazels both times and I used a control sigil both times of something that had already happened. But the first time I stopped overbearing gossip on a dime the second within an hour the goofy bitch was in jail. So take it for what it’s worth. Ya know make a sigil with the intention of going bald. You’ll know if it worked. 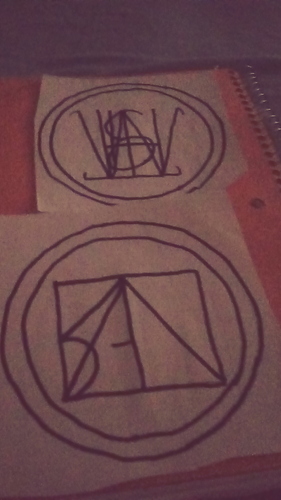 Yeah me too pal. Let’s take daddy’s sports car out sometime…what do ya say?

Rather than using sigil everytime, request sitri to come to you just calling his name rather than doing invocation ritual.

Well since he just shows up and speaks to me randomly I really don’t need her. But yes I’m aware a lot of folks have to do ceremonial magick to materialize their iPhone.

I didn’t know who the fuck he was…I thought I had schizophrenia my doctor says no.

@AradiaX you ever have to write out a natal chart and jerk the monkey off at 3:33? Or Does Lucifer just come with you?