A did a brief search here but yielded little results. I personally have never encountered one. I have read somewhere and I do not remember where but one account suggests that they are Lucifugum and subject to Lucifuge Rofcale. I’m exposing myself to correction and open to other theories here- of course there’s the dime a dozen time travelers from another dimension blah blah-. So why post in the baneful magick column? Straight up-There is nothing I would enjoy more than to instill a sever psychological attack and terrorize certain people. If it is possible to summon and compel them to instill terror on your behalf- the “old hag” and sleep paralysis phenomenon is another related topic of interest that it would be great to harness

I’ve personally encountered shadow beings and I’ve never felt threatened by them, nor have I suffered any sever psychological attacks just by coming in contact with them. I’m not sure why though.

I’m curious to see what you come up with though.

I had a dream the first night I arrived on this witches farm in Missouri. Thee herb witch and I exchanged so many synchronicities when we met so the love light was strong. When I went to bed that night, during an epic storm I might add, I was dreaming but it was one of those dreams that feel like reality, like normal vivid waking consciousness. These thick, pure jet black flowing creatures were darting around me and they put a fucking hood over me and everything went black.

I instantly screamed “NO!” and they disappeared. They were obviously shades. The terror they embodied was unmistakable, and they were trying to take me somewhere.

The crazy thing is before I went to bed, when I was talking to the witch, we were discussing lucid dreams and empowering kids to learn how to defend themselves from monsters.

Recently a very similar thing happened in dream. I was being attacked by these demonic zombie like creatures but I took a hold of my subconscious power and started turning them into normal harmless people, lol! It was funny how helpless they became. Then when I realized how lucid I was I proceeded to fuck as many women as I could before i woke up.

You can make your own shadow beings. They are called generally servitors or thoughtforms depending on the effect you want to produce and whether you want solely mental or energetic and physical. If you load them with enough energy while in a clear enough state of focus you can get to where they will do impressive things very quickly.

Very interesting. Where to start?

You can make your own shadow beings

Are all shadow beings servitors or thoughtforms?

This maybe off topic as it’s more of a conversation piece as opposed to my original topic of waging a psychological war based on fear and terror- but I’d be curious to hear some takes on the so called “hat man” so often associated with shadow beings and “the old hag” so often associated with sleep paralysis. I would love to harness some of this energy again to wage terror on those who deserve it.

I would suggest making contact, but that may be easier said than done…

Maybe get in touch with spirits that might be associated with shadow beings and get their advice? Closest I could find were Leviathan and Marbas.

Marbas – Demon President of the Day

Leviathan – Emperor of the Void and Abyssal Demon

Worst case scenario, if they’re not the best people for the job, they can point you in the right direction.

Very interesting. Where to start?

A good place to start is researching basic methods of creating servitors and practice those first before starting to shape them into the form you want them to have. Start with the basic ball of energy and light you program with intention. Initiation into Hermetics gives a good training course to aid in this. Basic chaos magick has many techniques for servitors and sigils for such things to look into as well.

Are all shadow beings servitors or thoughtforms?

Some of them. Many of them are like servitors and thoughtforms that were never dissolved and went rogue or were unintentionally created. Others are just simply people seeing normal spirits that have either manifested in some way or they are receptive enough to notice them without full clarity. Then there are shadow beings separate from these.

Others are just simply people seeing normal spirits that have either manifested in some way or they are receptive enough to notice them without full clarity. Then there are shadow beings separate from these.

I can agree. It seems people often feel stressful when they’re receptive enough and see black spirits walking around the house. They’re often not shadow beings but simply lightly materialized ghosts. Sometimes it happens to me that I see them (corner of my eye, sometimes overall before me) because I live near the cemetery. (at night especially they walk on the street like some ghost-party was supposed to be) And they have “light” energy - I mean, you feel like they don’t have any harmful plans - They’re black spirits but not evil nor malicious. Just spirits.

I had one experience with… I can specify “Shadow Being” and it’s energy was much more, well - strange, heavy. It wasn’t just black… it was black like hell, even though it’s the same color - but still “blacker”. I felt like it came from a completely different plane. It’s even hard to say if it is malicious or not, because it’s energy is so strange like … can’t explain. Anyway, feeling matters the most.

I had one experience with… I can specify “Shadow Being” and it’s energy was much more, well - strange, heavy. It wasn’t just black… it was black like hell, even though it’s the same color - but still “blacker”. I felt like it came from a completely different plane.

I know these beings, they are from another plane of existence. This is a hard thing to explain because it is much like a species of creature yet non physical entity, that exists and has a very physical effect on the environment.

My mother had issues with this for many years. To these beings we only see shadow because the light of the area is absorbed by them passing through our dimension so we see a shadow. These beings perceive more than the basic 3 dimension and the 4th of linear time. Time isn’t linear to them and neither is the timeline branch.

They are like monkeys swinging from timeline branch to timeline branch. They feed and sustain themselves on thoughts and emotion energy created by the many physical terrestrial biological beings that inhabit the multiverse.

We create our reality the way plants and animals shape their habitat through random chaos. In this garden of our planet in our timeline of reality we are the trees that produce the fruits they consume for sustenance.

The ultimate goal is to develop a sustainable energy farming machine on every planet for their steady consumption. There is no telling how long this has gone on or how long it will continue or even if there is anything that can or should be done.

But seeing as there are infinite infinities and timelines in the multiverse it wouldn’t be outlandish to say it has been happening since the beginning.

These beings perceive more than the basic 3 dimension and the 4th of linear time. Time isn’t linear to them and neither is the timeline branch.

Oh, There’s something about it (!)
When I met this thing for the first time I was at home - I was supposed to go, so I went to the bathroom to get ready. That day there was no electricity in the house (“short circuit” they said, but seriously - all day without it) It was dark in the bathroom - I opened the door wide, so that the light would reach the room (small window). I was preparing myself in peace and … I don’t know how and when exactly, but I suddenly felt there was something in the corridor. I can’t explain this situation well, because it was like a vision - I felt like something paralyzed my body and “stopped time” and I saw a black, strong figure. I can’t define energy of this being but when I saw it, I thought I met death. It’s energy was like a black spiral - strong, absorbing and … strange, like it was a portal. It walked really slowly down the corridor and suddenly it changed it’s shape to a more human one and smaller. He closed the bathroom door (yes, where I was :’) ) with his hand and went somewhere further. I had the impression like the “time” had come back and all this strange energy disappeared.

I stood in the bathroom… in total darkness. Shocked like hell. I was even wondering if this was real but my door was closed, and it was a fact. No - really, these are not normal spirits. I was afraid to enter the bathroom for a few days.

I made a sketch of this thing as if someone was interested. Not my best, but it was black like shit, so… It is after this being had changed it’s form. 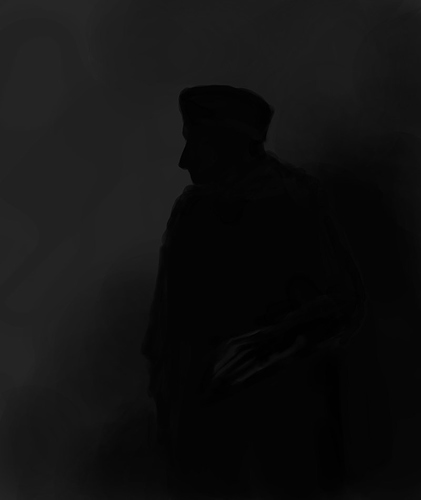 I grew up with a shadow being. The people here helped him not be bound to me though. He was a bad entity. I dont know that you can make them harass someone. This one watched over my brother and I while we slept (we both woke and saw him. That’s how we know.) But he chose to cling to me. I know that’s not much help. However. I can definitely agree there is not enough info on them. Very frustratingly so.