Servitor Creation Tutorial-How I dos it, in Ten Easy Steps

@Ragepanda last question(i mean it this time i think) what would you say is a good life purpose for a dummy servitor? I want to see if i am good at making servitors with a dummy before i create the servitors that are important to me.

All good, you can ask as many questions as you like.

If you’re going to make a test-of-concept servitor to begin with, I imagine you would want it to be an external goal (as opposed to create some kind of internal change) so you can eliminate the placebo possibility. It would need to be something where you are likely to be able to observe the result (as opposed to causing trouble for an enemy you are unlikely to receive feedback about for example).
I would suggest making it something relatively non-complex too.

A few ideas:
-Influencing someone in your life to change a behaviour or way of thinking. I would advise not making this a deeply entrenched belief as that can be very hard to achieve.
-Bringing you some product that you want either free or very cheaply. This may result in someone gifting you the item or in you suddenly coming across somewhere where its being sold unusually cheaply or in some other way.
-Reducing the stress levels of someone in your life

I would suggest making it something that does have some significance to you, but not necessarily something super important to you.

I advise against setting a timeframe. Let the servitor do its thing. It will take time for it to learn and grow and figure things out and then to influence events in order to fulfil its mission (especially as you won’t yet have other servitors for it to learn from).

Sometimes servitors can bring you results very quickly, but it can take quite a bit of time.

Also don’t be disheartened if your one (or first few) don’t play out as intended. I’ve found that servitor work involves a lot of experimentation, trial and error. We are all different and we need to adapt our methods to find what works best for us. For example, @Keteriya and I have a lot of differences in our approaches to the creation process and how we structure our design sheets etc, but we have a lot of similarity in our feeding approaches.
Over time you will develop a servitor style of your own.

I’ve found that servitor work involves a lot of experimentation, trial and error. We are all different and we need to adapt our methods to find what works best for us.

I agree. Pretty much in my view of things all paths are valid and your intent will get you where you need to go even if you don’t understand the vehicle yet.

Heya! I’m about to create a servitor! I have a sheet drafted with all the details, but should I have some where to house it? Like in an object? Will it always be around me? Do I need to worry about it interfering when I’m with family etc?

Some do recommend that you should have somewhere to house it, like a small bottle, jar, or ring. This is partly where the “genie (jinn) in a bottle” legends come from. Some people use body parts like knuckles, toes, elbows, etc. This is to anchor your entity to the physical/material realm.

House your servitor inside a cellphone, tablet, or USB flash drive.

I have one anchored to a scroll inside a tiny bottle. And a sigil for her. Then there are others that say you should structure a servitor without using a sigil.

but should I have some where to house it? Like in an object?

This comes down to personal preference. I like to use something I craft because the action of making it generates energy which is then directed by your intent (thoughts/rules for the servitor), but it’s not necessary.

I think having something you can look at or hold helps a lot of people because it gives you a tangible way to interact with the spiritual and yes as @CyberLord mentions it can serve as an anchor/focal point.

You might find it easier to remember to use the servitor and feed them if you have a visual reminder as well.

Will it always be around me?

Eh, sometimes they can be very present. Most of mine find ways to remind me of how they can contribute to whatever project I am working on.

You can have them go dormant or to sleep when not use, you can send them to learn from trusted entities or create a home for them in the astral to call their own.

There’s a place that I always see mine when out of body. I’m not sure I understand it, but I’ve been dreaming about it for years. I don’t have conscious recollection of creating the place though so this is why I don’t understand it.

Do I need to worry about it interfering when I’m with family etc?

Sensitive people may notice spiritual activity. I’ve a time or two asked servitors to hide themselves when I was asking them to protect someone who might be frightened to see something weird.

I can’t think of anything else of hand, so hope this helps some!

Alright this makes sense tysm! I will definitely house it in a tablet of mines!

Tysm! This helps a TONNNN! I appreciate your quickness with the answer!

should I have some where to house it? Like in an object?

As others have said, there are different ways of doing this. I prefer housing them in parts of me. My fingers, knuckles and a couple of toes are in use right now.

For servitors intended to career out long term operations for (or against) a third party, I have also been experimenting sometime with housing them inside the target. So far so good.
Working on a major new front in a long running campaign. Been producing a servitor a week for quite some months now- by the time the front is fully engaged, every member of an opposing group who have been trying to wreck my life will have their very own dedicated servitor,

For servitors intended to carry out long-term operations for (or against) a third party, I have also been experimenting for some time with housing them inside the target. So far so good.

So, you’ve found a way to house servitors inside your enemy’s area? Excellent idea! It almost reminds me of the scene in the “Matrix” movie when Neo jumped into one of the Agents and destroyed it from the inside.

Is this a “Trojan horse” type tactic or do you actually send the servitors to each member of the “opposing group”?

At this stage its experimental and the concept is not as elaborate as what you’re thinking.
It more came about because I needed certain servitors to operate on entirely detached service for extended periods of time with minimal contact from me.
Tasking them with housing themselves in the body of the individual was derived from my usual practice of housing them in parts of me.

Servitors on Detached Service are tasked in their instructions with (upon birthing) housing themselves wherever in the targets body they determine will be most beneficial to their work.
All have a number of feeding sources, including consuming any positive/beneficial energies of the target, the targets lifeforce, kinetic energy generated by the target walking, speaking or breathing etc, plus sources outside of the target. Thats the banefuls.

Non-baneful detached service servitors also have a variety of feeding sources, which include the consumption of any harmful/negative energies in or around the target, the kinetic energy generated by the target walking and sources outside the target.

In terms of the campaign, the individualised attack servitors assigned to each enemy combatant serve as a frontline of the servitor front in my long term ongoing operation (there are other fronts).
I still have more to make. For context there are nine ring leaders and a little over 20 other identified enemy combatants in this matter. Still more servitors to produce before they each have one.

As part of the campaign I have also created various Combat Support Services (CSS) servitors whose functions are, as the term suggests, to support these servitors across the breadth of the battlespace.
These include (but are not limited to): A command and control servitor with an immense breadth of feeding whose task is to supply additional energy to any of my servitors that needs more power and also to move any back on track if they deviate from their orders, a servitor whose function is to create angst between all of the targets and those in their vicinity, a servitor whose function is to suppress or destroy the defences of the targets.

Additionally, I have several servitors assigned to the enemy headquarters building to create various types of disruption and angst there.

Its a huge and complex operation. But I must stress that it is experimental. So far so good, but how it will play out in the long run remains to be seen.

The amount of work that has gone into this campaign is immense. The servitor tranche is but one front. Maybe it will play out well. Maybe it will flop. If the latter, I will just continue fighting on existing fronts whilst seeking other avenues of attack.

I have one anchored to a scroll inside a tiny bottle. And a sigil for her.

This is to anchor your entity to the physical/material realm.

Here is an example of mine: 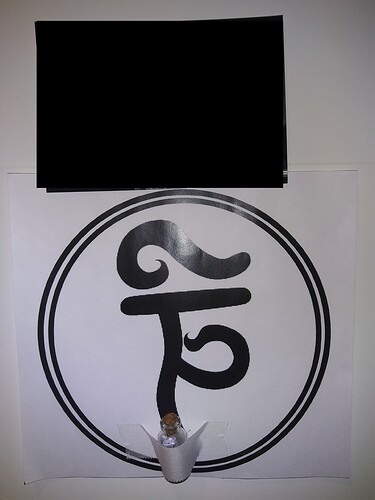 The photo (screenshot) of the actress I’m using for this servitor is blacked out. I have the bottle taped to a tulpa sigil. It’s sort of a shrine to her.