I wanted to share with you guys about this bodhisattva called Samantabhadra in Buddhism and ‘Pu Xian Pu Sa’ in Chinese folk taoist practices. I live in Singapore and we’re a multi-ethnic land with plenty of temples dedicated to beings from the taoist & buddhist pantheon.

Possession and channelling by some of these beings in temples are a common thing and people often consult these deities for whatever issues they may have.

I have been visiting a taoist/hindu temple near my home for the past 3 months to build a relationship with a hindu folk deity that I have feel drawn towards and found out they conduct taoist deity possession & consultation ceremonies every weekend.

After a rough patch in my life, where I relapsed into drugs and was literally sick and tired of other issues that keep coming again and again in my life - I decided to give it a try and consult one of these ‘beings’ and see what they have to say - though initially I was slightly skeptical (are these for real? could they be con-men?).

The medium invited the boddhisattva Samantabhadra into his body and once the deity was ready to see devotees, I was called up first - as I was the only person who was there to consult him on that day. The first thing I noticed as I sat beside him was that my body started shaking involuntarily as though there was excessive energy influx. I asked him lots of questions pertaining to my addictions, mental health issues, my vain visits to psychiatrists for the last 3 years etc.

Samantabhadra told me straight off the bat that I do not have any mental health problems and the main reason behind my mood swings/depression/anxiety etc. was that I am highly sensitive to spiritual energies and he did a major cleansing on my body using a burning piece of consecrated paper and mugwort. Something that surprised me was that he mentioned that some deity* has been trying to enter my body and that too is also a reason behind my struggles for the past 3 years but he told the time is not right for the spirit/god to come into me yet and he prepared a set of paper talismans and gave me certain instructions on how to use it and then come back to see him.

He kept emphasising on the fact that I should avoid lonely dark areas, abandoned places & graveyards as wandering spirits are easily drawn to me and further instructed me to shower in lemongrass daily for a period of several months and that has definitely helped in lightening up my mood and energy. 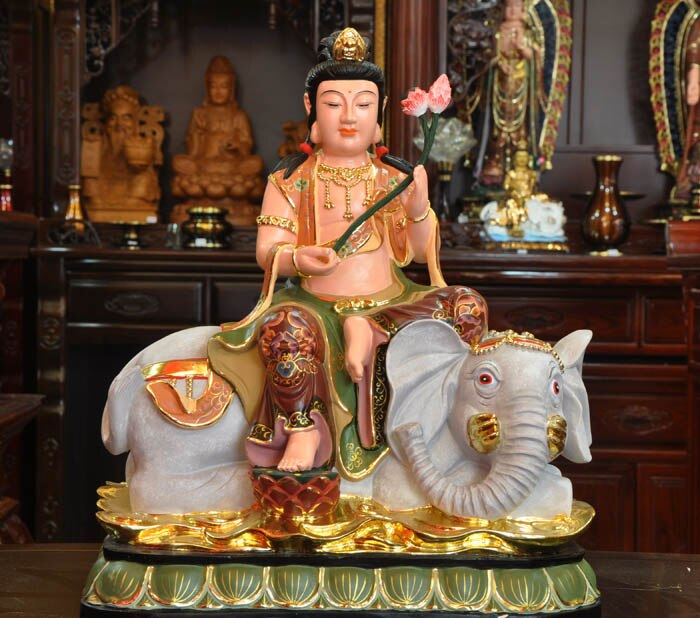 I recommend folks to work with this being as he is disinterested in religion/dogma etc and just focuses on the issue that needs to be resolved. Now obviously, I too have to put the work in but this being has helped me quite abit in terms of healing my depression/addictions etc and opened my eyes to a different side of spirituality.

NOTE: The place where I live, there are a number of people who become a conduit for certain deities to possess and come through and do what it needs to do (often times it is to help people with their problems etc.) which I am not too keen to become as that carries a set of rules and regulations and if it comes In conflict with magick, I’d rather stick to magic.

Below are videos on ‘deity possession’ in my homeland - of both taoist & hindu beings:


The deities channelled in the first video are known as ‘Tua Di Ya Pek’. These are a pair of taoist underworld gods who escort the dead, subdue evil spirits and called regarding matters of death.

Illustration of Tua Di Ya Pek: 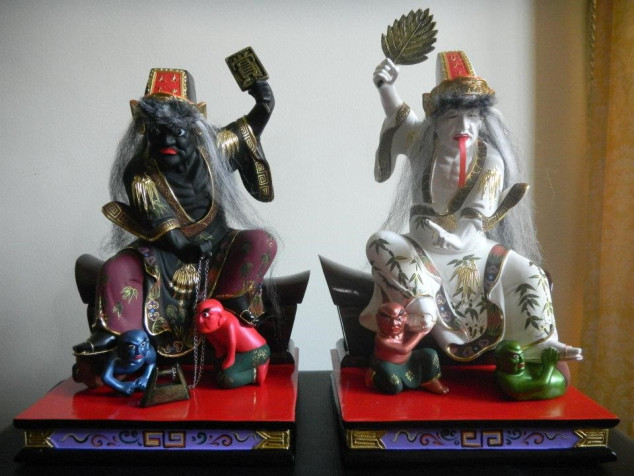 In the second video, the medium is being possessed by a popular folk hindu deity known as ‘Sangili Karuppan’ meaning the black god that wields the chains.

An Illustration of Sangili Karuppan 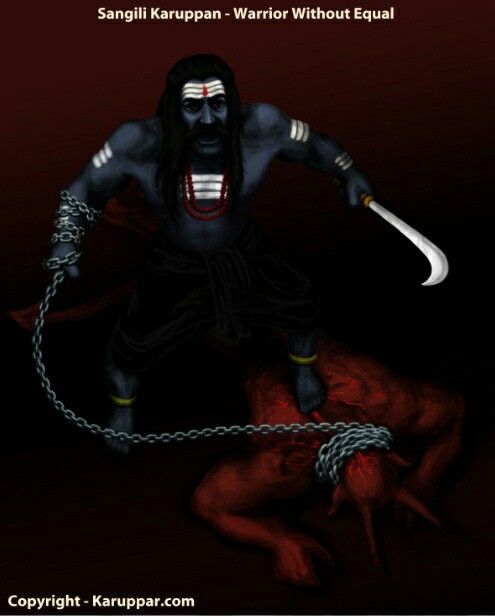 Loved reading this! Bookmarked. It’s awesome that you live in Singapore, because I travel there a lot and have been interested in all the Chinese folklore, legend and mythology ever since my older sister took me to see Haw Par Villa. I remember being very taken with the 10 Courts of Hell and just staring at them in awe for quite a while.

There’s also a temple just below the place I stay in there, and I would often feel a bit of pull to go inside, but welp, Catholic parents. My doubts get the best of me too, for I still do not understand the locals’ Singlish accent at times (

Reading your post though had me deciding to visit the nearby temple when I go back there this November. So, I want to thank you as well. Keep the informative posts coming!

You may want to visit some of the Taoist underworld Temples - dedicated to their hell gods. These aren’t too common here as most prefer the heavenly beings but I’ve always had a draw to the hell gods - just can’t help it.

It’s so surreal that a fellow BALGer frequents Singapore!!

We can actually meet up when you come! It’s so rare to meet a fellow BALGer in person haha.

Very cool, nice to hear about entities from this part of the world.

Was about to suggest that as well but I felt too awkward lol. Thank you for the invite! Feel free to PM me anytime regarding the meet-up (I think this November, can).

Until then, I shall enjoy your posts.

Yea and it’s also surprising how similar some of the processes are with some of these spirits, like possession, tobacco and alcohol offerings etc.

They did remind me of the loa.

That body piercing with swords is also done in my home town. Seems Occult , doesn’t matter in which part of the world one goes to does have A basic pattern. IT IS A SCIENCE !!!

Nice video by the way, if possible, provide some good source of info about Daoist Gods.

To be honest, ‘Taoism’ doesn’t acknowledge such practises, e.g deity possession so all of this falls under a form of folk taoism popularly known as ‘Sintua’ in the region where I live (Singapore/Malaysia).

There are numerous taoist folk deities present, though I do not know much about the heavenly beings, here are some popular ‘heavenly deities’: 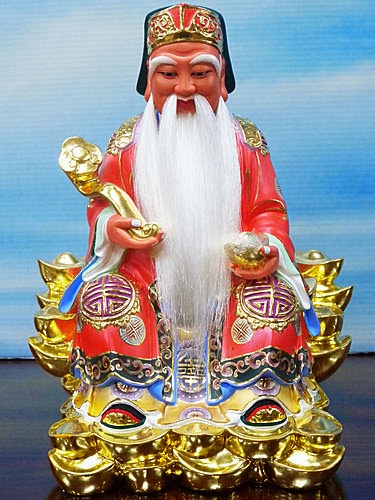 He’s a gentle grandfatherly figure and is often associated with wealth & prosperity - just type his name on google and there are lot’s of info on him. 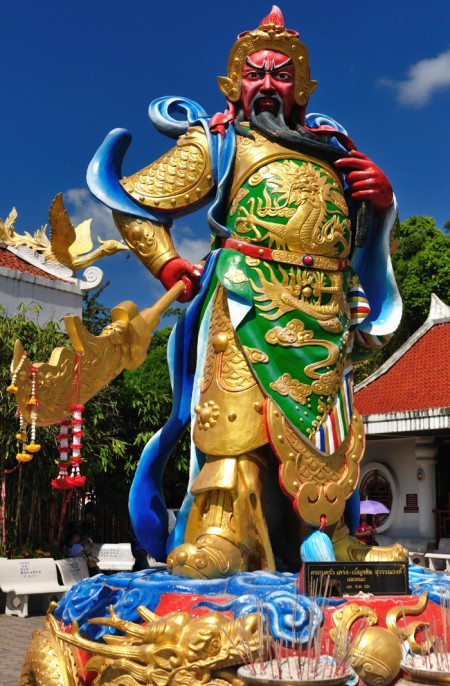 He was a military general who was killed and later became deified. Guan Kong is worshipped for protection and is popular with businessmen who wish to safeguard their wealth as well as with the Chinese triads (gangsters) for his bravery & loyalty.

I have mentioned these beings in another thread if I recall correctly. They are a pair of underworld ‘policemen’ who look after matters concerning death & the afterlife and are not as popular as some of the heavenly deities. Not many people work with these beings or have an altar for them at home however they are pretty popular amongst other hell gods in Sintua.

The black figure is called ‘Di Ya Pek’ & the white is known as ‘Tua Ya Pek’ and both are brothers. A temple near my house conducts possession & consultation ceremonies every Saturday night where Di Ya Pek is invited. All the lights in the temple have to be dimmed before he can be called and the participants sing an invocation, to call him from the underworld into the temple.

I have consulted Di Ya Pek twice personally and he gave insightful advise and told me about certain things in the future that I have to be careful of, things to avoid etc. He is blunt and doesn’t sugar coat things but what he says is helpful if one takes in constructive criticism. Quite a joker as well for a hell deity, if he’s in the mood! He has a strict moral code and doesn’t bend them no matter what. Di Ya Pek reminds me of Ghost Rider as he uses chains to subdue malevolent spirits 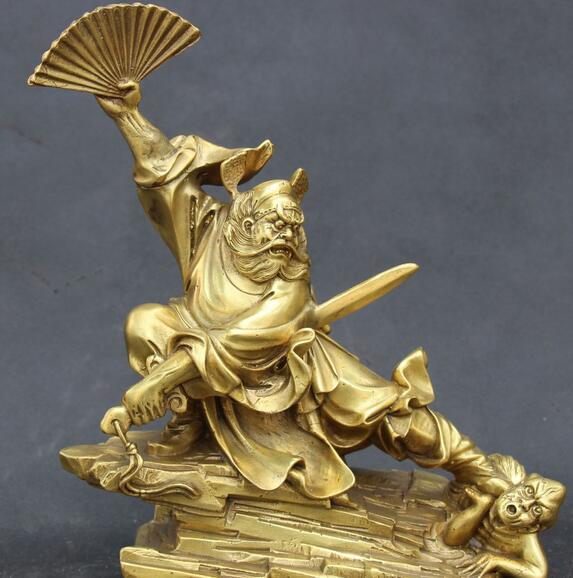 He is called the ‘Demon Slayer’ and is reputed to command around 80, 000 demons. Zhong Kui was once a man as well, similar to the deities above, who later became deified after his death - He was a bright scholar who committed suicide as he was turned down by his King due to his facial deformity (the story is more than this, but it’s a quick snapshot).

In taoist temples with a shrine for Zhong Kui, you might find 5 ghostly statues that look like the ones below and these are spirits that serve as ‘runners’ and enforcers for Zhong Kui. 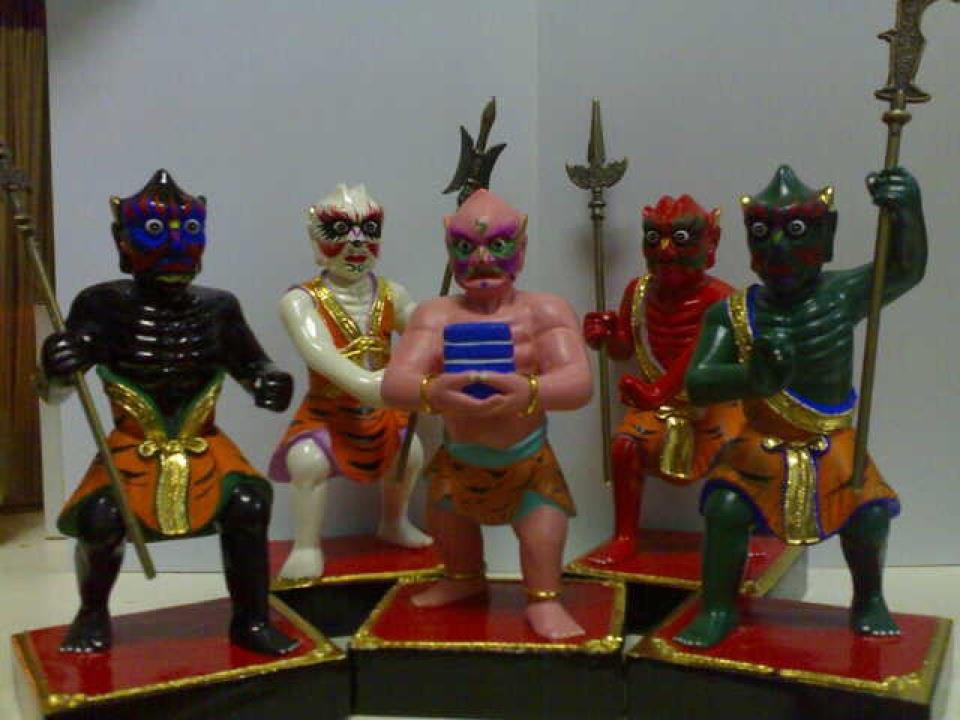 One thing to note, all of the beings stated here were deified humans or at least they existed in the flesh before their ascension unlike some of the other beings we work with in BALG who were never human to begin with, but that doesn’t mean their less powerful or ‘weak’ in anyway, but they often tend to have strict moral codes (especially hell deities).

This is a very short write up but I hope it helped you a bit and if you’re more interested, you can do some research on the internet or connect with them via meditation & structuring.

Hi @Pazuzu, by far this is the most comprehensive post about tangki/sintua and I appreciate you sharing your experience.

Im from Singapore too. I am in the midst of going through some tough times and I am looking for a sintua that I can visit to seek divine help. From all my research, I’m inclined to seek help from Dua Yi Ah Pek.

Are you able to share with me the temples that can do this if you have the information? Does the temple you did your consultation also trance other deities? I really would like to hear your experience, like how did you speak to the deity, did the deity reply you through an interpreter? How much did it cost? You can PM me if you’re more comfortable with that.

Welcome @Nehkent It is a rule of this forum for all new members to properly introduce themselves, so please click the link below and tell us about yourself and any experience you may have in magick ie what you practice, how long you have practiced, areas of interest, etc:

That’s awesome man. The temple I went to ‘call forth’ only Samantabhadra & Di Ya Pek every Saturday night. Other deities do not come often except on grand occasion - but they may not be open to consulting - sometimes they come down just to oversee how things are being done and if they are done properly.

Currently with the covid situation, the temple has been closed temporarily hence medium sessions are halted for now.

I spoke to the deity via a translator though I get the feeling that they do understand English just fine just that respond in Hokkien/Mandarin to a translator who relays the message in English. Di Ya Pek was quite a sombre yet insightful deity for he said a lot of things in my life that were accurate as well as what can be done - he didn’t go into spiritual matters much - at least the one I saw.

Samantabhadra is very focused on the spiritual aspect hence almost all of my conversation with him was solely on spiritual matters, energy cleansing etc.

There is no fee and if I am correct, the mediums are not supposed to collect money for their service - voluntary donations are different.

Wow…thanks for sharing. I understand that the temple is closed now, but may I get the address and contact please? Hopefully I can go there in future when it opens.