Results of my first attempt at summoning Lilith

Just attempted a summoning of the Succubus Mother, herself. It was definitely odd… I am usually afraid of the dark (stupid at 18, I know) but it began to feel extremely calm. I felt a sensation in my right hand, as if it were resting on something.

I drew her sigil on a piece of regular letter paper, and used the sexual energy in my semen to charge it, seeing as she is a succubus. In the background, I played some lucid dreaming binaural beats - figured it’d help with visualizing.

Though I struggled with visualization, there did seem to be a lot of movement in the dark ahead of me. This could have been my eyes messing with me, but none the less, it felt right. I attempted to speak to her with tarot cards, but I think I may have gone about it wrong.

My space was tight and the room was dark, so I drew off the top when I likely should’ve spread them out. The method I tried with the cards was requesting she show she’s there by making me draw a number (6 in this case). It didn’t work but like I said I think that’s my fault.

I’m leaving her an offering food and drink - an apple and some tea (afraid that’s all I can get her at the moment.) I’m also putting some Japanese hanafuda cards beside them, as I heard she likes the colors red and purple (both of which are frequent in hanafuda). To add to the red color scheme, I have placed a red light over the offerings. Gonna try again tomorrow, and read on the psychic senses some more.

EDIT: It gets better… my Past, Present, Future tarot after the attempted meeting. 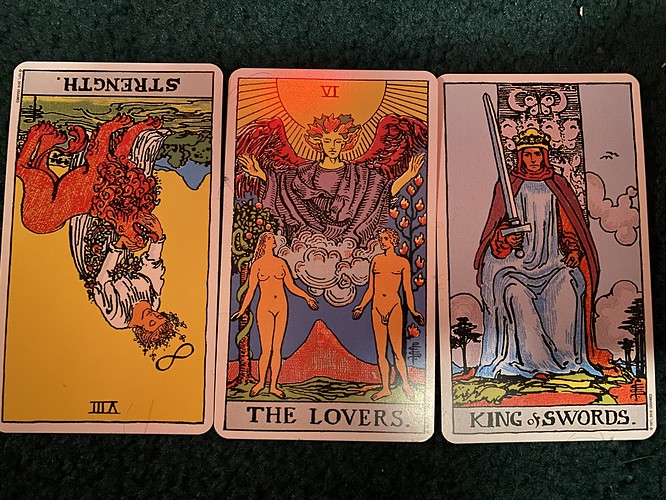 It might help if you changed what you thought about her. For starters, she’s not a succubus. “Goddess” is a more accurate title/descriptor, and if she had appeared there, you’d know it. Judging from your description, someone might have been there, but I doubt it was her. And she doesn’t need tarot cards to communicate. She can simply reach in your head and get the information she wants without having to deal with talking.

Also, what is your intent? Why are you seeking to summon her? You don’t say in your post, and if it turns out you’re doing it for selfish or immature reasons…you might not have a good day if she does actually show.

I don’t mean to come across rude. But I…I’m sorry, i saw your post and wrote the above as sort of a compulsion, and am trying to digest these feelings I’m having but wasn’t expecting. Just a weird aftereffect from her visiting me a month or two ago.

I’ll leave you with this. Her presence is divine, as in the literal “Godly” (capital G) meaning of the term. So be sure your intent is pure and you treat her with the proper respect if she does come.

seeing as she is a succubus.

When did Lilith become a succubus?

When did Lilith become a succubus?

Just a bit of sweat and hardship, even you will be a succubus, my friend.

Hehehehe I can only hope…

Some people view her as such, to me she’s a succubus demon

I think it’s far more accurate to say she is a demonic temptress because she is not limited solely to feeding on sexual energies like a succubus, and her traditional Judaic lore says that she works to “lead men from the path of righteousness” (with God’s permission). Later, when the myth of Adam’s first wife was added to her story, she was the primordial First Woman, who became the Mother of Demons by rejecting God’s commandment to lie with Adam, and basically fornicating with everything else.

She is not a goddess, but just as Belial is a powerful demonic king, I think it would be quite appropriate to call her a demonic queen. She is married to an archangel, after all.

I thought she was “the mother of all ubi”

Interesting idea there actually. Since aren’t the offspring of one species usually of the same species? Except for crossbreeding.

Another exception of that is in shapeshifters, in a way. Loki produced many strange beings as he shapeshifted into various forms.

She is yes, but I still consider her a demon

Alright I don’t debate that. I simply found it objectionable to see her to degraded to a mere succubus.

Alright I don’t debate that. I simply found it objectionable to see her to degraded to a mere succubus.

Indeed. When you successfully summoned her, you will know that her presence is there with you around you. Lilith is a force to be reckoned with. If you can handle the deep dense energy and tight atmosphere she’s the perfect entity to work with far far more than what most consider her in the “sexual” category. I simply see her as a goddess in my own personal view of working with her for quite a long while now. Just my own views is all.

@Just_Alex If you can at any other time, Black Coffee and Red wine have been my past offerings to her to which she enjoyed. Respect towards her goes a long way with what your looking into working with Lilith.