Lately Ive been reading Liber Falxifer and Im considering beginning the work, but I want to hear others experiences with this Saint of Death first. Undead God, maybe you can help with this?

The Qayinite tradition is one of devotion that demands a certain amount of attention. If it feels right after reading and meditating on it then it may indeed be worth getting deeper into. Things build up over time in this system, so dedication is a must. My experience has been positive and a bit startling at times. It took a bit to understand the odd occurrences and be able to read into them clearly. The dead can have a sense of humor in brutality. Best ov luck if you are sincere.

Excellent note-I think people fail to grasp the seriousness of some of these practices and so even though Ive read and meditated a bit, it feels right but I have to also be sure that this saint is compatable with my own path, as Im currently progressing in Santería and the Orishas also require a sense of discipline in devotion/dedication and cannot simply be abandoned (not that one would really want to anyway). Ive also grown up around other central american folkloric saints like the Mayan Devil San Simon/Maxímón who are similar in nature and dealings…

I feel compelled to speak about this topic. Master Qayin is a very strong entity. He has revealed himself to me twice already and that is without ritual on this physical plane. Whilst reading the book I believe an individual will know if this is the path for them. I felt an instant bond but I was still surprised that he would make his presence known to me on two separate occasions when originally reading the book.The book has been consecrated by the author and makes it that more special. If you have time for Master Qayin he will have time for you.

Funny thing, the excrrpt from my book of shadows I previously posted on one of Undead God’s threads about LSM was the same for me-she made her presence known in a very tangible way,and I see her image quite often in some of the most unexpected places so I consulted a friend who works with Her and he said thesr are good omens because it means she wants me to get to know Her…I bought a pendant at the botanica down the street, now I need to consecrate it to Her. Any suggestions?

That’s really cool. I know that even the most basic veneration will establish links. So perhaps that’s a good place to start, and let her guide you to a more appropriate working, if even needed. In the general section of this forum I asked E.A. His perspective and advice on approaching different folk saints. Maybe he will share and that could give ideas and direction with this particular ancient death goddess.

Another excerpt from my BoS tonight-I wanted to share this:

Somewhere around 10pm I was talking with someone outside in the dark and distinctly saw a brief flash of a form manifest visibly from (or in) the astral-it looked around the size of a child and though I couldnt ‘see’ it clearly I was able to discern that it sort of jumped/spun? On iys haunches and ran away toward the street in a motion which seemed like a dog or rabbit…Ive never had any spiritual encounters this tangible from the physical plane-and I wasnt even trying! Earlier today I bought a small pendant of La Santisima Muerte in the same design as the old one I gave away. Its been over a year since my encounter with her, and only very recently have I started to pay attention, but I am confident she will come after the dream…

Okay, my last post sounds a little schizo now that I read it again, good thing only fellow magicians are reading this lol! I did a little basic research and found that La Santisima Muerte has a closed and open cult, similar to that of Señor La Muerte as discussed in the first volume of Liber Falxifer. The ‘closed cult’ is highly clandestine, and it is the preserved tradition from which the widespread enthusiasm (open cult) for her mysteries recently emanated. It is said that the Aztec cult of death personified as Mictecacihuatl, the Queen of the Night and Swallower of the Stars, was preserved underground until somewhere around the 1940’s when the European catholic representation of the scythe bearing angel of death was adopted as Her “official” image and her name evolved into La Santisima Muerte, but there are also sources who say this is a myth. As for Her colors, different attributes have been given to a wide spectrum, but once again, it is said that only 3 truly describe Her essence as the Bride (white), the Mother (red), and the widow (black). The encounter I had in my dream I particularly remember a rosy-reddish color (aura) glowing. It strikes me interesting that so many Goddesses have a triple faced archetype to them… but in case any wiccans or ‘neopagans’ are reading this, she CANNOT be synchronized with Hecate or any other goddess for that matter and it would be very unwise to attempt to incorporate Her into your altar setup.

Mighty Santa Muerte I Call Upon You, to Ask Your Permission to Summon Your Wise Owl Santa Muerte You Who Know All the Secrets of the Universe I Seek the Knowledge of the Owl Who Is Ever Present With You

My Mighty Queen, I Need to Open the Pathway to the Secrets of Your Mantle I Need Help of the Wise Owl to This Plea… Show Me Santa Muerte, Who My Enemies Are, Who Is Harming Me and My Loved Ones, Mighty Owl Grant Me Your Eyes, That See All to See the Right Way in Life to Follow, Teach Me Mighty Owl How to Be Closer to the Santa Muerte, Grant Me Mighty Owl, Your Great Hearing, to Hear All the Rumors and Lies, Being Said About Me and My Loved Ones Behind Our Back Teach Me Mighty Owl 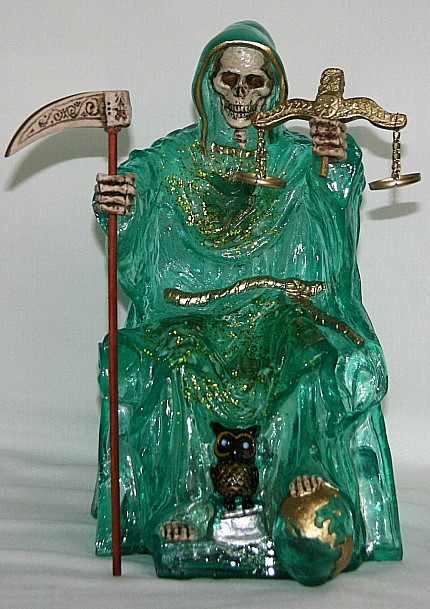 The Owl ? That means i know who first made that prayer O_O

The name or archetype used to perceive her is irrelevant to the essence or force being conjured, though it certainly is a beautiful form in my perspective. You obviously didnt review my post on Her Aztec origins. To further add to that, the aztecs used tequila in substitute for blood sacrifice when circumstances would not permit. It was far more than a mere alcoholic beverage, it was brewed specifically for sacred purposes…

Those of you who follow the Qayinite tradition, did anyone deviate from the suggested materials for ensouling their shrine?

I ask because I’ve seen some say that they’ve substituted certain things such as the human bone powder for powder from animal bones as well as chose to substitute the sacrifice for something else. I was just curious what the effects where such as backlash or lack of potency from the rituals?

I feel it’s best with this type of thing to follow instructions until a deeper direct communication is established. The potency of the workings though are pretty individual.

Lately Ive been reading Liber Falxifer and Im considering beginning the work, but I want to hear others experiences with this Saint of Death first. Undead God, maybe you can help with this?

I have the books, was very excited to get into the current only to find it requires Blackthorn for damn near everything. While its very common in the EU and the east coast of the US, it doesn’t grow in California. I asked for help from them for a possible replacement common in Cali, but not luck. I suppose that it isn’t a current for me as no substitute was intuited through meditation. So, expensive books sit on the shelf unused.

I have the books, was very excited to get into the current only to find it requires Blackthorn for damn near everything. While its very common in the EU and the east coast of the US, it doesn’t grow in California. I asked for help from them for a possible replacement common in Cali, but not luck. I suppose that it isn’t a current for me as no substitute was intuited through meditation. So, expensive books sit on the shelf unused.

Why do you not utilize the internet?

You can get Blackthorn on E bay relatively cheap I got a stang and a bag of the thorns .Don’t be quitter the path isnt supposed to be easy.

You can get Blackthorn on E bay relatively cheap I got a stang and a bag of the thorns .Don’t be quitter the path isnt supposed to be easy.

I like your “Just do it” attitude. I guess my dilemma is that the collection of the Blackthorn as you well know requires certain offerings.